The written word is all that stands between memory and oblivion. Without books as our anchors, we are cast adrift, neither teaching nor learning. They are windows on the past, mirrors on the present, and prisms reflecting all possible futures. Books are lighthouses erected in the dark sea of time.
Jeffery Robbins in “Gargoyles”

A few weeks ago I did buy a Kindle Voyager. I was looking for a lightweight eReader using eInk. Something I could easily read my digitized books on. After looking at the different options (Amazon seemed suitable, so Paperwhite, Voyager or Oasis), the Voyager looked the best of the three.

I was positively surprised by the sharpness of the screen and the effect of the eInk on the eyes. Or rather, the lack of any effect. Reading was much more relaxing than reading books on my old iPad 3. However, almost everything else was a disappointment.

One of my first steps when I buy a device is personalization. I actually go through all the settings to see what the device (or the OS) can do and «make it mine». For me, it’s an important issue. However, Voyager only allows for a few settings. You can (and Amazon wants you to) connect your device to your Amazon account. However, besides giving the device a name and setting a few reading options, that’s about it.

You cannot even change the screensavers (unless you jailbreak it, see section below).

Amazon shows one of a handful of images when you turn off the device. Given it’s eInk, you see the image all the time while it’s off. It’s a great idea, but abysmally underused. Every smartphone and tablet can show a lock screen image. On an eBook reader it would make sense to show the cover of the book you are currently reading (with an option to disable it for the current book or show a «cover cover». No dice with the Kindle OS for the Voyager.

This is not only an aesthetic issue — the Amazon images are also ugly — hell, it’s not even a pure personalization issue. One thing the lock screen is really good for is to give information about who owns the device. Imagine two Kindles in the same room. Or image accidentally leaving it in a café and someone finding it. A short text on the home screen would be really helpful here. But yeah, not with the Kindle Voyager OS. 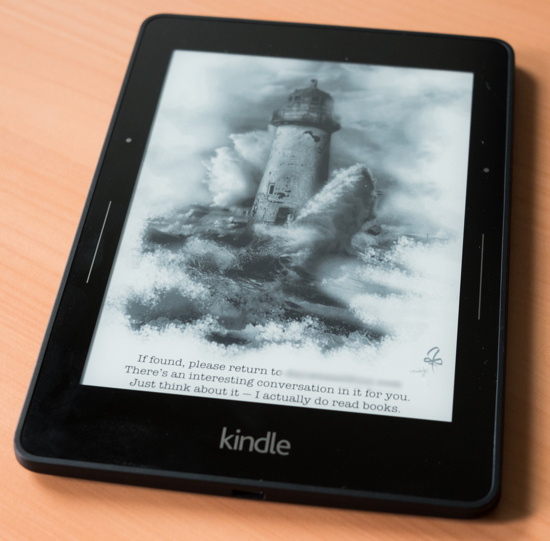 There are advantages to having a “lock screen” image of your own. Well, this image was online (not mine!), I just added my contact eMail below it. And yeah, you need to jailbreak your device to set a personalized “lock screen” image!

(I don’t buy into the idea that most people would not return what they find. Sure, if it gets stolen, you’re not getting it back. But when you accidentally leave it behind, most people are honest and try to return it — at least, if they clearly recognize it as the personal device of another person and can easily do so.)

I have lots of ebooks in the form of PDFs. The Voyager has about 3 GB of space, and you can simply copy PDFs into a documents folder to read them on the device. But putting them all on the device would be a bad idea. It might be different if you use the Kindle software and use collections, but you can’t simply create folders and expect them to be used by the interface. It just shows all the books one after the other. No hierarchical file structure. Finding a book might take a while.

For me the dealbreaker. Yes, eInk looks nice and is very energy efficient, but it is also sluggish as … well, a slug. From turning the pages to selecting a book in the manager, it just takes too long.

You can jailbreak your Kindle (see here). Amazon does not try to prevent people from jailbreaking their device (there is an agreement that the jailbreak does not remove ads on the ad-infested cheaper version). However, having to jailbreak the device if you want different screensavers or a better PDF reader (which can reflow the PDF text, see image below) or a better file manager … seriously? 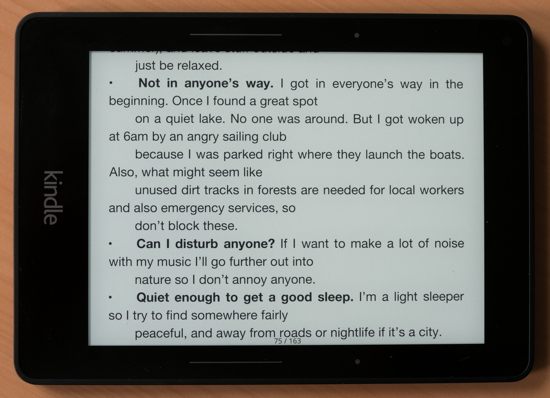 So, the idea of having a lightweight eBook reader did not work out that well. At least for me. Other people might have different criteria and if all you want to do is read fiction, esp. Amazon eBooks, it’s probably a good device. Even if you have PDFs, just extract the text and reformat them for the screen size. When I tried it out with «A Princess of Mars» an A5 file size with 1 cm margins all around and Century Schoolbook 16pt font with 12pt spacing after a paragraph did work very well. But for my purposes — reading all types of PDFs, having quick interaction … it’s not suited.

I’ll probably gift my paperweight, for some people the Voyager might be ideally suited. In the meantime, I’ll have another look at getting a new iPad. It’s more than double the size and more than three to four times the price of a Voyager, but it might suit me better.

Even if it’s not as portable and needs recharging much more often than an eBook reader.