After having reviewed a few more student (bachelor) theses, one thing sticks out: Many students have problems showing a clear argumentation throughout their work, often even within chapters. The problem isn’t that the text could have been written better — every text could. It isn’t a style issue. The problem is that a lack of clear argumentation in the text betrays a lack of clarity of thought when doing the work. The text is simple the indicator, the visible matter in which the thought process of the student becomes visible.

And giving that the students should follow a clear line of thought, argue for their decisions instead of rambling on and jumping to conclusions, this is a problem. In many cases, it is implicitly clear to the students why they did what they did, but they don’t write it down in a logical structure.

Thinking about how I did write texts as a student, I think the following diagram might help. The diagram is specific for the types of works my students write, but it can be applied to other disciplines as well. 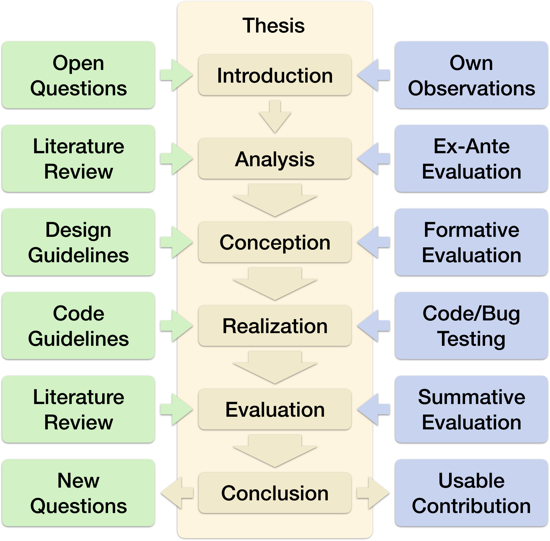 The center column shows the work itself — the written text of the thesis. Each chapter leads to the next one. And each chapter gets input both from existing work (left column, green) as well as the own (often empirical) work of the student (right column, blue). The content in the green and blue boxes show typical content, other content is possible. The last row switches the direction — as new questions are raised by the work and the work (hopefully) provides a usable contribution (knowledge, software, etc.).

What is important here is not only the quality of each box — existing work, own work, and the written document itself — but also the arrows. Each new chapter has to follow from the previous ones (with the exception of the introduction). They each synthesize (at best) the information from existing work, the students own work, and (with the exception of the introduction) of the previous chapters and prepare the ground for the next chapter which builds on it.

Practically, this means a clear, logical structure when laying down the “facts”, the building blocks, and a summary/conclusion at the end of each chapter which shows the connection to the next chapter. Each chapter then repeats the main conclusions of the previous chapter (usually not more than a few sentences) and adapts the information to the current chapter. What does the information mean for, e.g., how the app should be programmed.

So much for how it should be — in practice, it’s often hard to see the structure. One reason why I strongly recommend really documenting the work, then planning the structure (e.g., with content outlines) before starting to write the text. It is very hard to show this structure clearly when you just write down blocks of text. And after all, the process serves the work, by making it manageable, protects from mistakes, and more likely to succeed. And, of course, the structure itself guides the documentation.

And yeah, that’s how I see the writing process. A tool to help students think clearly about what they do and why — and what they have to do next.