“Biology kicks Virtue’s ass, in my experience.”
“She’s 26.”
“Yeesh. So she doesn’t have to be cute.”
Kate and C.J., about the president’s stepson-in-law rumored affair, in “The West Wing”

I have a couple of pictures on my walls. Some of my own photos, but also reproductions of art. One of these images is “Hylas and the Nymphs” by John William Waterhouse. It’s a famous painting, although I first noticed it in the context of a censorship debate.

But the reason it’s on my wall is not to remind me of the dangers of censorship and how ludicrous it is to try to ban nudity. That’s a given, after all, you’d also ban some great works of art and suppress a lot of much needed pleasure.

Nope, it is to remind me how hard it is to change one’s perspective and understand the situation of other people.

Have a look at the painting. 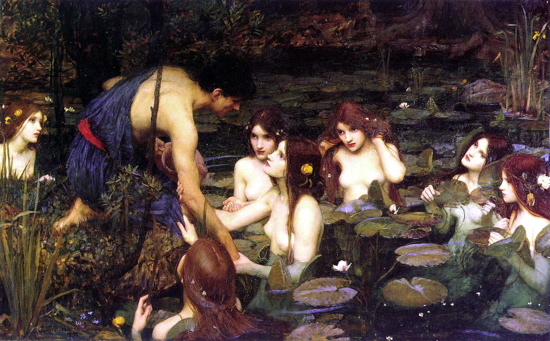 It seems like a seductive scene. Hylas collects water, stumbles upon a pond with nymphs — beautiful young women. And they definitely seem interested in him.

But what always stopped me cold was the pond.

My parents have a small pond in their garden. It is not something I would want to step in. The ground is wet and slimy, and there are insects and other critters all over the place. Including some kind of eels, and spiders that live underwater carrying an air cocoon.

And that’s why I think perspective taking is hard. Seeing the world from another person’s perspective. Actually seeing the situation. With all of its elements, including the slimy ground and the critters. Not only the positive and salient bits of the main actors/actresses in that scene. It’s easy to assume how other people feel. What they think. What they want. But I think it is hard to get it right. (Among others, because the person might not know it him-/herself.)

And that is a common problem. Many people overestimate the person and underestimate the situation this person is in. It is an effect so fundamental to human nature that it became the name of this bias: The fundamental attribution bias.

So, this image serves me as a reminder. While it frequently vanishes from my attention, I notice it often enough. And the effect is important enough to remind me of it.

And yes, this is still another persons perspective on the situation. Strongly biased by my previous experience with ponds. Perhaps Hylas did not mind the pond and all its critters. He (supposedly) lived in a different time. Perhaps he thought it was worth it. And these maidens do look … interesting.

Also something to think about.

2 Comments on Wet and slimy and full of critters