I got the question what the last posting (“Wet and slimy and full of critters”) had to do with gender (“gender” was used as category and tag). I think it’s a nice opportunity to address why I am interested in gender as a topic, even when organizing creativity has nothing to do with it — at least on the surface.

It’s a truism that creative works have always been the enemy of the status quo. Creativity is deliberately doing something that is new and useful so it moves beyond the status quo. And the status quo does not like it. Also, to get new ideas and spread them, you need an open marketplace of ideas. Let ideas compete, not ideologies.

What I notice more and more — and that might be my selective perception — is a very strong drive by certain elements of society to censor and control. In my youth, it was more the right/conservatives, today, it’s more the left/progressives.

Just have a look at these articles:

If that’s the future of academia, the vanguard of intellectual discourse, I see a bleak future. And much of that censorship and control seems to focus on a “women have it bad”, “women are affected the most”, “women are victims” narrative.

Personally, I am an egalitarian. I have said multiple times that — with some very few exceptions — I do not care whether someone is male or female, as long as this person does a good job. I value interest, grit, intelligence, skill, talent, merit, drive, enthusiasm. I have worked with very good men and very good women, but also with abysmal men and abysmal women. I’ve had male and female bosses, and male and female subordinates. I’ve studied psychology (8:1 women:men) and was enrolled in computer science for a while (1:8 women:men). I think I have seen some diversity in these matters.

Today, merit or interest does not seem to the the issue. It seems to be more and more about quotas and equality of outcome, not equality of opportunity. Instead of ensuring that everyone, no matter whether male or female can chose a certain career (a given in my and in most other Western countries), it’s a strange fixation of equal numbers. Well, equal numbers in high prestigious jobs.

The problem I have with this view is that merit is no longer an issue. It’s fulfilling a quota. It is also extremely condescending to try to determine the futures of people irrespective of their genuine dispositional interests. Who are these people to decide that a person should study a certain subject just because this person has or has not a specific kind of plumbing? Study what we tell you too, otherwise you make our group — to which you have made no conscious decision of joining — look bad.

But, unfortunately, that seems to be the zeitgeist. And it fits, equal distribution in a discipline of men and women is easily measurable. Also, other people than the ones in power have to do the hard work (and having been enrolled in computer science but being unsuccessful in it, I can tell you from experience that mastering the mathematical foundations is very hard work).

Even worse, there is this strange view of reducing society to “men vs. women”. If I would make a guess, I’d guess that some people/groups deliberately strive to create strife between men and women for their personal gain.

And just think about what that view “men vs. women” entails, frequently stated with “men have/are …” or “women have/are …”. It’s a view akin to:

where if you do one member of the group something positive or negative:

you benefit/damage the whole group:

Yeah, not happening. Life does not work this way. There are differences in average position or income, but these are (usually) paid for by amount of work (incl. overtime) and selecting specific courses of the others. But suggesting that just because some men have it better (on average) therefore all men have it better is pretty stupid. Society does not work this way. To use an extreme example, the Kaiser, Paul von Hindenburg and Erich Ludendorff were all male, but tell that to the likewise male soldiers in the trenches.

I think a more applicable model is this one: 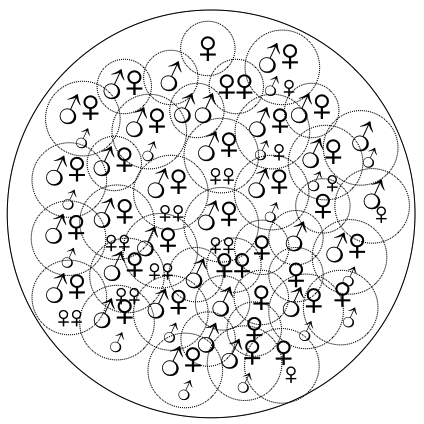 and even that does not include all cases, and it should really be in 3D (BTW, the smaller symbols are children). So if you do something positive (or negative) for a person: 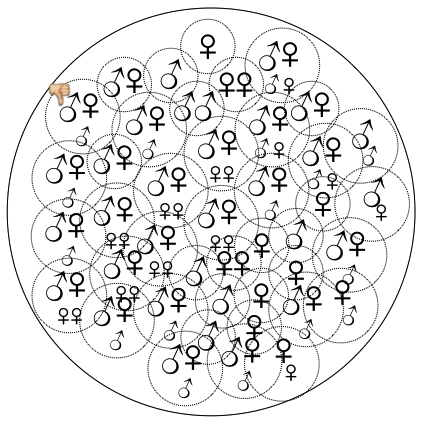 it might spread to that immediate circle, and even beyond: 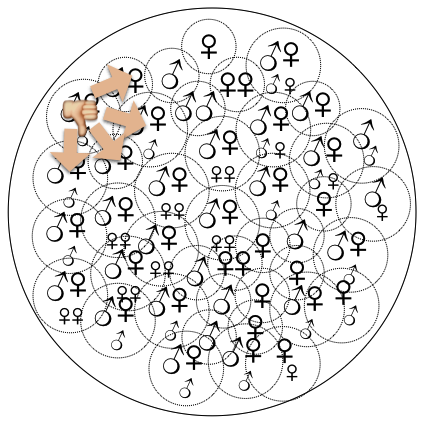 but that’s the best you can hope for. Unless of course you would selectively target one gender, but then, normally that would be sexism. And I agree with Christina Hoff Summers here:

“It’s impossible for men to win, because if women do something better than men it’s just evidence of their innate superiority, but if men outperform women, that’s proof of discrimination and retrograde patriarchy or toxic masculinity.”
Christina Hoff Summers

I also see the differences between men and women less as all members of one group better than the other:

and more as overlapping distributions, so more like this:

In short, while you might be more right on average in choosing someone of a particular gender, the huge overlap and the reality that you are talking about actual human beings here precludes a decision made on gender. So, yeah sex/gender is a dirty variable, it generalizes abysmally. Individuals count, and we have the computing power to assess and address them individually. And personally, when it comes to men and women vs. male and female attributes, I think that most men have more “male” attributes and most women have more “female” attributes. That’s why we call them this way. But there are enough exceptions. I’d be interested in studies but I’d go for 20-30% at least.

And like said, I’m a bit worried about the development. We need ‘the best and the brightest’, we need a free marketplace of ideas. To be blunt, we have an economy and a way of living on a planet that cannot support this for very much longer. We need good ideas. This isn’t a game. This isn’t a field for con artists and frauds. Yet, they seem to flourish.

And they influence good people. For example, there are people I usually highly respect, because they provide excellent contributions to scientific writing, but who post — well, not right, not even wrong — sheets about how women should fear speaking in public because they get targeted by abuse. I mean, dafug? Getting shit on the internet has nothing to do with your gender — everyone gets it. But those who claim women have it worse might just provide the blood in the water to divert trolls to target women specifically.

You speak in public, you get criticism. And that’s great, you can learn from it. You also get trolls, so, there’s ignore, mute, and block. As Ebner-Eschenbach said (roughly translated):

“Those who go public must not expect nor demand leniency.”
Marie von Ebner-Eschenbach

I get increasingly angry at people promoting the “women affected most” narrative. In almost all cases, both men and women are affected. In many cases, the differences between these groups are negligible.

So why do some people try to scare away 50%+ of the population from making a contribution? Why are some people bent on having people of sub-par skill participate just because they have a certain background or chromosomes?

Usually, because they get exposure, power, influence, or money this way. Because this is the zeitgeist and they exploit it.

Make no mistake, creative work is hard and time consuming work. It is not for everyone. But don’t buy into the idea of things being gender-biased. If anything, with all the quotas and programs specifically for women, it’s biased in favor of women. But the work itself, the creative work, it does not care whether you are male or female. It cares about what you give.

And as long as there is this “women have it worse” narrative running, I’ll be addressing this topic here.