I do not feel obliged to believe that the same God who has endowed us with sense, reason, and intellect has intended us to forgo their use.
Galileo Galilei

One of the basics when it comes to presentations (and digital editing in general) is understanding layers and transparency. In short, when you add images or objects to a presentation or file, the images are put over each other, with the latest one being above the previous one. Kinds like a scrapbook where you add material. But it does not have to be this way. You can easily change the position of an image on the “stack” by moving it further to the back (below the previously added images) or putting an image to the top of the stack. If a piece of software offers layers, you can group images (or elements) into layers, meaning you can change which images are on top within a layer, and move these layers as well (affecting all images on that layer). Unfortunately, Keynote does not support layers, so you have to deal with all elements at the same time (which are on top of others). But at least, Keynote supports transparency, which allows for some nice effects.

Keynote allows you to select the position of objects (which is on top of the other) by right-clicking on an object. The two top commands in the mouse menu are Bring to Front and Send to Back. For more fine-tuning you can use the “Arrange” menu (application control bar on the top of the screen). There are also icons you can add to the menu bar of the Keynote window.
And transparency, combined with putting objects in front or back of each other, allows for some nice effects.

Transparency can be applied to whole images or part of images — if these images are, e.g., saved as PNG. JPG does not support transparency, although you can use Keynote’s “Instant Alpha” tool to set parts of an image transparent. Going with the scrapbook analogy, transparency is just that: (Part of) an image that shows what is below this image.

Why is it useful? For some nice effects. For example, for cropping videos.

I wanted to add a video to a presentation, but show only a cropped part of the video. It’s easy to cut videos down to a specific segment with MPEG Streamclip, then save the trimmed part. You can also export it and crop the video in the export options, but you have to specify the numbers of pixels to crop (left, right, top, bottom). Sure, you can estimate the right numbers by putting the unscaled video in Keynote, then placing square boxes over it (without shadow) and cover the parts you don’t need. The size of the boxes tells you the values. But I wanted to have a little more control. My latent perfectionism bubbles through at these points when the image does not fit exactly. Unfortunately, Keynote does not seem to allow you to crop videos.

But there’s a workaround: PNG files with transparent parts of the image. PNG as graphic format has an “Alpha Channel”, in short, you can not only chose colors but also say: “I want this part (where this specific color is) transparent”. Tools like Graphic Converter can turn a color into transparent. You can also use the “Instant Alpha” tool in Keynote.

Which easily allows you to turn an image placeholder: 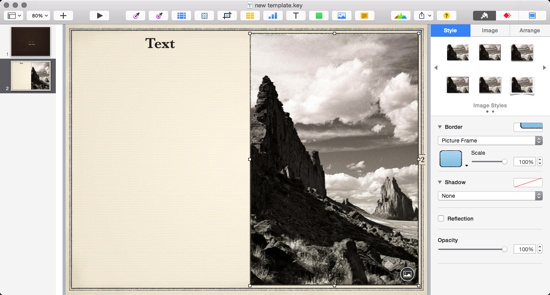 into a placeholder you can use for videos 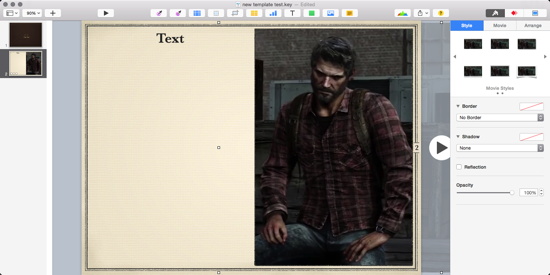 simply by recreating the slide background with the image part as transparent, put the video behind it (move to back). You can then scale the video. It’s still a far cry from being able to crop the video directly, but I found it useful.

To do so, use an image that has one solid color (e.g., completely yellow) and put it into the image placeholder. Then remove the slide number and all other text. You want only the image and the default background, nothing more, nothing that changes. Use File => Export to => Images and export the slide (use PNG). Then open the slide in an image app (e.g., Graphic Converter) and turn the image area into transparent.

You need to work with the tolerance values a bit to ensure that only the space for the image becomes transparent. And yup, it’s bitchy when it comes to irregular image borders.

Once you have the area transparent, save the image, create a new master slide in Keynote, then put the image in (should fit the slide perfectly), and send it to back (right click => send to back). Ensure that you turn on slide numbers and check “Allow objects on slide to layer with master”. Otherwise you will not be able to move the video behind this image, as the master images will be treated separately from the rest. I also lock the image into position. 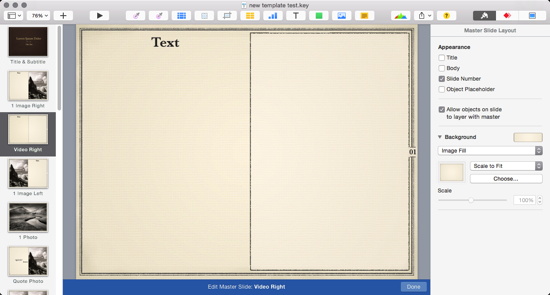 Leave the Master view and insert this slide into your presentation. You can now insert a video and send it to back. You will see only the part of the video that is under the transparent part of the background.

BTW, if you do not want to work with transparency, you can also just a export a blank slide as image, put it back in, copy and paste it 3 times (four in total), and then use the image crop function to turn each background image into the top, bottom, left and right area, with the space for the video left free. Group the images and you have — essentially — the same thing. Just make sure that you send the borders to the back (right-click, send to back) and when you insert the video, to send it to back too. It’s then behind the border and you see only the space not covered by the four images. 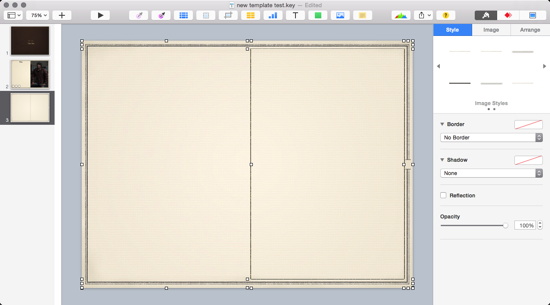 The advantage with creating a master slide here is that you only need to do it once.

You can also use it to show a part of an image (e.g., left and right side under the added cropped background) and then reveal parts of the image by moving it around or using the “wipe”-build-out animation on the additional backgrounds. I found that especially for images, the animations Keynote provide are often only almost what I wanted. Not to mention that if you use the transparent video placeholder for images, you can scale and move images around yet ensure that the image always stays in the area for that image.

What makes transparency cool is that the transparent area does not have to be rectangle. It can be anything. For example, have a look at the following animation:

I wanted to have a nice effect “reactor” feeling to show what happens when the cycle is working. So I used a video cut from “Iron Man 2”, cropped it a little, and created a background with a round transparent area (the inside of the cycle). Simply by putting a filled circle object over the area I wanted to have transparent, removing the rest, exporting the image, turning the circle transparent, and inserting the image. After inserting the video and putting it in the back (and rotating it, so that the beam comes from the top) — et voila. (I did export the video without sound and added the sound separately. The build order under animation makes sure that the parts start when needed.

And yeah, perhaps an overkill (that slide took about 2 hours to create), but I wanted to emphasize a point. And if everything works as planned, I can do this presentation twice this year. Yeah!

In short — have a look at transparency. No matter what the developers of Keynote intended, you can do some cool stuff with it.