“I’ve seen things you people wouldn’t believe. Attack ships on fire off the shoulder of Orion. I watched C-beams glitter in the dark near the Tannhauser gate. All those moments will be lost in time, like tears in rain. Time to die.”
Roy Batty in “Blade Runner”

I have already mentioned it in the last posting about Dealing with your data, but it is worth mentioning in a separate posting: Backups.

When it comes to having ideas and the likelihood of these ideas surviving the development is quite differently. The amount (and hopefully: quality) of your ideas increase over time, but the likelihood that some kind of “extinction event” happens to your data increases.

Personally, I had all kinds of events, for example:

But there is also this here: 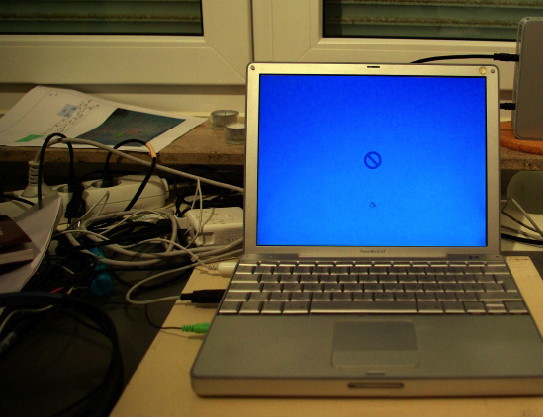 My beloved PowerBook refusing to start (hard-disk was not found anymore, likely broken). All data was lost. On the other hand, what you see in the top-right corner of the image is my external hard-drive — which contained a full backup.

When the hard-disk of my PowerBook broke, I had a backup. You can see it in the top-right corner of the image. Did I lose data? Yup, three files I think. Not more. To be honest, the hard-disc crash did announce itself — there was a slight clicking noise about three to five weeks before the hard disc could not be found anymore. Otherwise, there were no indicators. But when I heard something new coming from my PowerBook, I made backups religiously. And I have kept it up since then. Because frankly, there is no “force” that ensures that your most important data is kept safe. Nor that it is especially vulnerable. There is only chance and mechanical or electronically failure. It happens. That hard-disk in the top corner of that image — it is broken now. It does not matter, because the information is on a couple of other hard-discs now.

And that’s just the thing I like to convey here: Digital data — while having many advantages — is ephemeral. Consider it a house build on quicksand. You have to secure it — early, often, incrementally, and externally, otherwise it will get lost. Perhaps you are lucky. I am a heave user working with a lot of files and using them frequently. I do not envy the hard-discs that I use. But whatever you create can be lost in an instance. A mechanical failure, a lightning, a glass of red wine ending up on your notebook. It happens. Even if you do everything right and the technology does not break, it can get stolen. Notebooks are very attractive to thieves. So, make backups. The rules for backups are simple:

I cannot stress this issue strong enough. Our time here is limited. Our ability to invest our energy in projects is limited. If you think this will never happen to you because you have never heard of a major writer or creative individual complaining about it think about why they never did this — because after you lose all your data, how likely is it that you resume your creative work? Or finish that book when you have to start completely anew? So make backups. Get a strong-box at the local bank. Send the files to your parents.

But make sure that whenever you have created something worthwhile digitally that it survives even if your computer does not. Otherwise it will be lost.

And that’s a shame, to say the least.