Never noticed it before, but vlc can easily adjust the video image for the video you are watching (even on the iPad). You can desaturate the color, go for a sepia tone, and much more. It’s under “Window” – “Video Effects”. 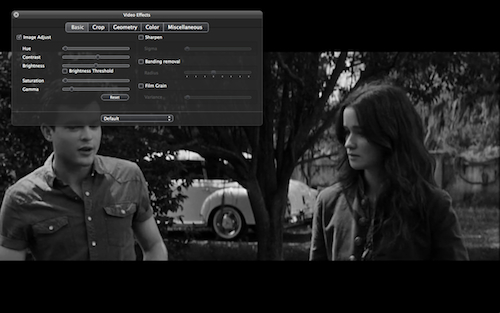 Screenshot from “Beautiful Creatues” (2013), shown with vlc on a Mac, desaturated to mimic (a poor version of) black and white.

While desaturation produces — at best — a mediocre version of true black and white movies (see image), it’s an interesting feature. If you ever thought a movie looked better in black and white, or with more/less intensive colors, or other changes, it’s worth a look.

P.S.: “Beautiful Creatures” is one of those movies with incredible potential: The leads are charismatic and have beautiful/interesting voices (hello deep south), there are some surprisingly good points, good humor, and self-irony … but the story has some … grrrrrr … as one critic said, toned down for “Twilight” audiences (also, the “moving background” in the car scenes is stupidly made, and the distinction between “mortal” and not … meh, doesn’t make sense). But fun movie overall — I’m curious how the books are …

Update 17-Jan-2014 (late evening)
Hmm, about a day too late. This posting was about a week in my WordPress queue, but it took me until today to read the books (“Beautiful Creatures”, “Beautiful Darkness”, “Beautiful Chaos”, “Beautiful Redemption”). They were like the movie, an interesting mixture of really good and … not so good elements.

Regarding the first book — the one the movie is based on — some scenes in the movie did make more sense after reading the book, e.g., why Ethan was driven to school, but driving on his own from school. Or why Lena was sitting in the house surrounded by her relatives playing with lighting. Other things still did not make sense. Hmmm, I’m guessing the changing world-map in the movie was a continuity error — in the beginning, America is in the middle, then it’s on the left side. Some stuff in front of the map also changes position. Anyway.
On the other hand, some things in the movie were way better than in the book. For example, the lead characters in the movie have more charisma. Lena in particular had more … bite. And they skipped some scenes that might have been nice, but were too close to existing works of fiction. The kind of scenes that are immediately recognizable and that are hard-to-impossible to top. For example, a scene straight from Carrie (only with water instead of blood). Still, I feel like some potential was wasted — with the book and the movie.

The other three books did turn out interesting as well. Perhaps some scenes were a bit too close to existing works as well, e.g., the Keepers were a bit too close to the Council in Buffy. I’m also no fan of fiction written from a first-person-perspective, and introducing Lena as a second first-person-perspective in the fourth book … hmmm … don’t like it. Still, some nice ideas and scenes. The books were also quick and easy to read — four books in a week aren’t a problem. So, not bad but it could have been more.

But I guess that’s what dreams are for.

Categories: Inspiration, iPhone/iPad, Mac in General, Music & other Art, Something to Think About, Tools