Best blackboards: At Fermilab, every office has at least one that stretches from the floor to the ceiling.
«Studmuffins of Science» Calendar

A university I know of recently added a tablet to one of their lecterns: 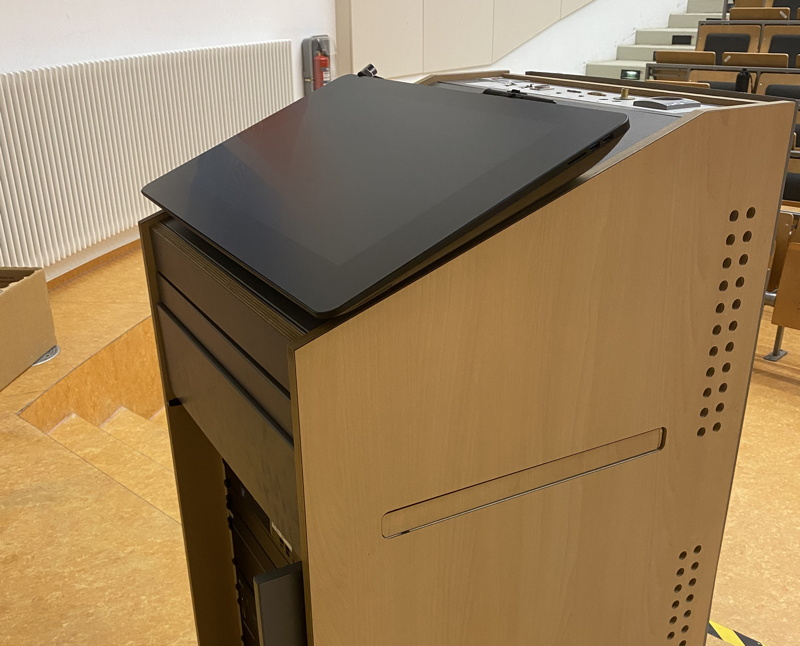 Never mind the atrocious design. Or that you could (likely, I dunno) open the Kensington lock with a roll of toilet paper. Or that you can no longer lean on the lectern (e.g., while supervising an exam). The intentions are likely good. If you can draw on a tablet instead of writing on a blackboard, you can look up occasionally and face the audience. The students can get the digital notes later, you can show digital media, etc.

But what do we lose — after all, technology usually adds and subtracts.

I did use the blackboard for pretty much the first time in my teaching last semester. And I wouldn’t want to replace it with a tablet. Sure, you turn your back to the audience. Sure, you work with chalk that leaves dust on your skin and clothes (even a chalk holder can only do so much). But there is something to be said for writing on a large blackboard. Of walking around. Or having the space to develop ideas and point to specific places later in the discussion.

And that’s only the blackboard. And sure, it’s still there — for the moment. But I would not be surprised if they get replaced, because they are no longer modern enough. Overlooking that — if used well — they can be a pretty great interactive medium. And if they get replaced, I am not sure the tablet can replace it. I can grab a piece of chalk and jot something down in less than 5 seconds (depending on the length of what I write down). Doing the same with a tablet that is not my own … yeah. I wonder whether there’s a study that examines how the behavior changes … might be interesting …

So, yeah, here’s to the blackboards.