Here’s to the crazy ones.
The misfits.
The rebels.
The troublemakers.
The round pegs in the square holes.
The ones who see things differently.
They’re not fond of rules.
And they have no respect for the status quo.
You can praise them, disagree with them, quote them,
disbelieve them, glorify or vilify them.
About the only thing you can’t do is ignore them.
Because they change things.
They invent. They imagine. They heal.
They explore. They create. They inspire.
They push the human race forward.
Maybe they have to be crazy.
How else can you stare at an empty canvas and see a work of art?
Or sit in silence and hear a song that’s never been written?
Or gaze at a red planet and see a laboratory on wheels?
We make tools for these kinds of people.
While some see them as the crazy ones, we see genius.
Because the people who are crazy enough to think they can change the world,
are the ones who do.
Apple Think Different Advertisement (a long time ago in a world far far away)

Not surprisingly — if you have a couple of brain cells to rub together to generate a postsynaptic potential — the Covid numbers did increase during fall/winter 2021. And not surprisingly, the government went authoritarian. Now I have to show a negative Covid test result each and every day I work at the university. Well, if I am not doing home office. But given that each tests costs me around 30 minutes (14 extra minutes to walk to that testing center, 2 minutes to do the test, and 14 minutes to walk back … hah, well, now 32 minutes because I must not enter the building before I get a negative test result, which takes around 16 minutes after the test), I spend each and every non-university-lecture day at home.

Even though home office does suck.

But that isn’t the topic of this posting. The topic is — what happens if these regulations purge the ones who do not want to get vaccinated. Those roughly 15-20% who do think differently. Those who have to get tested each and every day. Those who will likely either leave or switch off the independent parts of their brain and get vaccinated against their (former) convictions.

Well, first off, it makes things much, much easier — at least for a moment. Until the Covid cases appear. The ones that shouldn’t happen because now all are vaccinated. Yeah, right, as if that vaccine would actually prevent infection or death. I might reduce the risk for a while, but that pretty much is it.

But that’s not the main consequence.

I think, one side or long-term effect of purging those who think differently is that you reduce the amount of people who do see things different in a lot of ways and situations. Those who do not follow the immediately obvious route. Those who see things that are not obvious, that do not demand attention.

And it does not matter whether their workplace is the university (for which I do work, at the moment), or the army (who goes a similar path regarding vaccinations). Making things obnoxious for unvaccinated will reduce the number of people who do think differently.

I feel the pressure myself. On the one hand, I love the university. Love working with students, finding ingenious or just usable solutions to design problems. On the other hand, my patience is wearing thin regarding those inconsistent and nonsensical regulations. Even more so now that I have to show a negative test each and every day to prove that I am not lying about being negativ. Before I can enter my office. In the fall/winter. Perhaps I should start smoking while waiting for the negative test result. Hrrrm, so much for degrading treatment by ones employer.

But yeah, I think we do not see the negative side- or long-term effects of these regulations. The creative people will leave. Those who think differently and — in other situations — find creative solutions. This does not mean that there will be no improvement or working solutions from the university. But they will be incremental, and rather dull.

It’s a pity, we were a rather ingenious and industrious nation. But like with «Pre-suation» by Cialdini, the overall landscape went … rather dark. Not conductive to creative/ingenious solutions.

BTW, this posting was a shower thought. It pays to have a waterproof notepad (I use «Rite in the Rain») in the shower. Well, if this posting is any good. 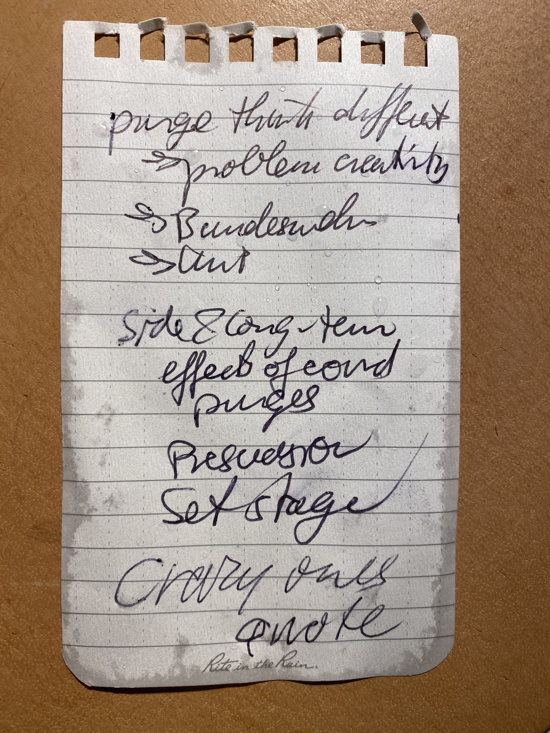