Let me first stress that I love working digitally. I think, and my hands write. Not as fast as I think, but faster than I could ever hope to write with a pen. However, there are moments when that deliberate slowing down effect of writing without a keyboard is very helpful.

For me, it’s when I want to learn something I have to remember completely without having any access to notes, digital or otherwise.

As written in another posting, when I learn something for exams, I usually make notes by hand, with pen on paper, then go over the notes with crayons, then create mind maps. That usually ensured pretty good grades at the university.

(The only real exception here was an exam in which I was asked about a course I did not need to take — and did not take. The information wasn’t part of the literature I had read either, but the professor didn’t care, and neither did the legal department. So the prof had fun crucifying me and gave me the lowest passing grade. Unfortunately, it was in a subject I considered very interesting and wanted to pursue at the time. That vision of the future did not die, but it was delayed considerably. On the bright side, I did learn a lot during that ‘delay’, things I would not miss for the world.)

I’m currently using my free time to learn about a subject I’m very interested in. And while there are no exams in the foreseeable future, I have the same constraints here: Remember it and act upon that information without (necessarily) having access to notes.

(The topic here is what would roughly be translated as “emergency psychology”. In short, it’s applying psychology to emergencies — esp. regarding prevention, intervention, and rehabilitation. It’s super-interesting to me, while also being a very serious and, given the types of emergencies, not fun but meaningful topic.)

So given that I want to retain as much information as possible and act upon that information without having access to my digital infrastructure, I’m making notes per hand. And while I really love “uni Power Tank” pens, I use too much pressure to use them for longer time periods. My hand just cramps up, a finger hurts, and I somehow can’t get myself to use less pressure.

So I decided to invest in a fountain pen. The delicate nib serves as a reminder for me too use less pressure, and the writing is much more comfortable.

And using a high quality fountain pen is quite something. 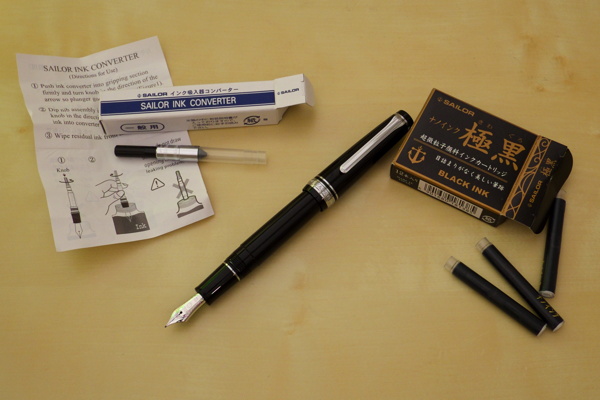 Personally, I ended up with a rather pricy Sailor fountain pen. I didn’t ask which model (some 1911-version, 14K nib, F width), frankly, I was going for ease of writing and being able to write really small. But I later learned that this company seems to produce rather good fountain pens (here or here in comparison). In any case, just to be on the safe side, I got a converter to use ink from an inkwell (also in case I run out of cartridges). And so far — waow, love using it. First cartridge is already empty and I’m still psyched. I’m glad that I went for a slim nib, because it allows me to write tiny.

Fountain pens might be associated with schools, or with older people and peace treaties, or only with making signatures. But I think they are still relevant — and with the right one, a joy to use. I’ll still use my uni Power Tank for quick notes (nothing beats a ballpoint pen when it comes to speed), but for longer notes … yeah, hello fountain pen.

So if you write longer texts per hand, you might want to try a few of them out.

Yesterday, I gave away my pen to the person who does the engraving. Won’t get it back until Monday … and damn, I already miss it. But if the engraving goes right, it will be personalized and look even better. I hope. Damn, I miss that pen.

BTW, patter has a blog entry about her new pen. Might be interesting to read as well.