One cool judgment is worth a thousand hasty counsels.
The thing to do is to supply light and not heat.
Woodrow Wilson 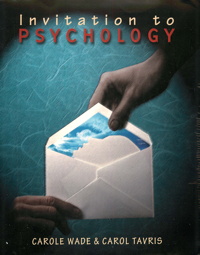 I did study psychology because I was curious why people act the way they do. I did not really want to help them, which seems to be a prevalent goal among psychology students, but because I wanted to know why the fuck some people do things that really cannot really be justified. Yup, I had some bad experiences during school. But that’s another topic.

Anyway, when I was studying psychology I was also pretty unsure whether this was really what I wanted. Mostly because I could not imagine anyone paying me any money for the knowledge and skills I get by studying this topic. But during my studies, I stumbled upon a book by Carole Wade and Carol Tavris called “Invitation to Psychology”. I loved that book. It showed me the value of studying psychology. Brilliant book. (BTW, with statistics, social and cognitive psych, organisational psych, etc — yeah, there is value in it. It’s a great science, but only if done right.)

So I was pretty curious when I found a talk by Carol Tavris called “Who’s Lying, Who’s Self-Justifying? Origins of the He Said/She Said Gap in Sexual Allegations“.

And waow. I mean, I’m German. I was (negatively) surprised that U.S. colleges/universities can do their own investigations into atrocious crimes and expel students, even if the police does not consider the charges substantiated. I mean … really? In Germany we have the police to deal with these crimes, and the … federal prosecutor (I hope this is the right term). They know — more or less — to deal with crimes. What does a college or university know about it?

Anyway. I strongly suggest watching her talk. It’s very interesting, well done, and it might convince you of a better way to handle accusations that most people usually show. The only criticism I have is that it’s about accusations of rape regarding male perpetrators and female victims. She did apologize for no going into lesbian or gay relationships, but there are also situations where a woman is an aggressor and a man is the victim. But yeah, great talk, among others by acknowledging that:

“self-righteousness is not the same as being right”
Carol Tavris

“I made a lot of mistakes, as I learned to play what Deborah Davis calls “The Dance of Ambiguity”, which protects both parties and the relationship. By being vague and indirect, each party’s ego is protected in case the other says no. She can say yes, without having to explicitly admit it’s what she wants. Either one can subtly reject the offer without rejecting the suitor. It’s a terrific system, really, except for the fact that it gets both parties into so much trouble. As Davis says, there is a price for all this ego protection. Each one can misinterpret the others wishes. If one partners desire to have sex isn’t made clear, they can lose a great opportunity. If one’s desire not to have sex isn’t made clear, unwanted advances proceed unchecked. Indirection saves a lot of hurt feelings, and it also causes them. She really thinks he should have known to stop, and he really thinks she gave consent.
Carol Tavris

“for turning the dance of ambiguity into a dance of intimacy that is more pleasurable, more honest, and more satisfying for each of us in our private lives”
Carol Tavris

P.S.: Thank you, Carol Tavris, and Carole Wade, your book really convinced me to stay in psychology. And even if I leave Academia, I’ll fondly remember what it taught me about humans — and skeptical/critical thinking.