“I believe in America. America has made my fortune, and I raised my daughter in the American fashion. I gave her freedom, but I taught her never to dishonor her family …”
Amerigo Bonasera in “The Godfather”

Recently I noticed that my iPad lost battery power pretty quickly — and it got … really warm. Always a bad sign, it shows that energy is wasted. Given the only open App was Notability, the culprit is pretty clear. Apparently, Notability does a lot of processing when its got a lot of files in the app (in my case: around 400, including a handful PDF books).

So, after reducing that number to less than 30 (simply putting the files I do not need to read at the moment into GoodReader), and with only one or two books, there’s been quite a change. You see the difference here (Settings > Battery): 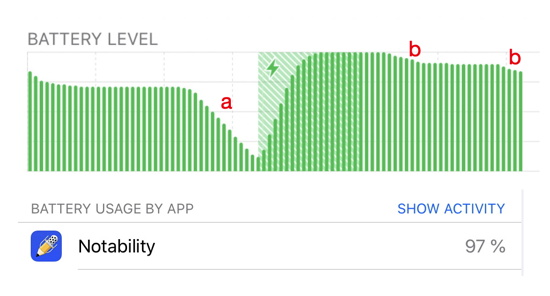 And yeah, the energy consumption when Notability had to deal with over 400 PDFs (a) vs. now (b, with a break in between) is striking. Just draw a line and see when it hits the x-axis. Looking online, apparently Notability had this problem before but they *had* it fixed.

And strange that software like GoodReader does not have this problem.

So yeah, use the information the system provides you with, esp. if you notice anything out of the ordinary.

And developers — please, do include a few power/heavy users in your usability tests. Usually I advocate for including those who dislike to interact with technology, but now I think most developers don’t know who … intensively some users use their apps.