DEVONthink — the Mac App and it’s iOS version — is a great application. It allows you to sync files on your Mac with your iPad or iPhone. And that’s just the sync. It handles data much, much better than Mac’s Finder and provides a lot of functionality. It’s a bedrock of my work (and private) infrastructure.

With iOS version 2.7.2, the iOS version started to generate previews. There are good reasons for it for a lot of users, as the iOS version now works better with the iOS files app (information from DEVONthink). Unfortunately, pre-generating preview images does cost a lot of disk space if you have a lot of files. Seems strange — it’s only preview images — but it adds up. In the tens of gigabytes range. 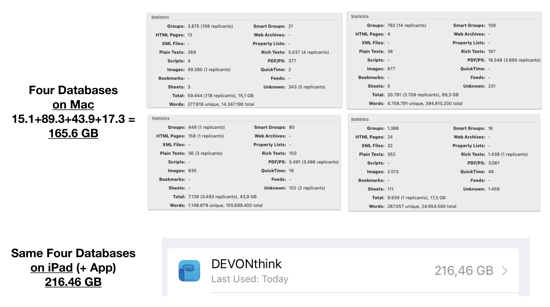 Suddenly, my 256 GB iPad got serious disk space problems. For comparison purposes, the same four databases which take up 165.6 GB on my Mac take up 216.46 GB on my iPad. A whopping 50 GB difference. Sure, the space is likely used differently and you likely lose some space due to these differences anyway, but 50 GB for preview images?

I had to remove a few databases and now carry only four with me. That’s a really bad trade-off.

Hmm, thinking about it (short update after posting), I’m comparing the space of the data, not counting the database information itself. Looking at the size of the databases in Mac’s Finder, it would be 205.21 GB. But that includes backups of the database information. Perhaps there are other things at play here. No idea how large each preview file is and how much space it actually takes. But the available iOS disk space did go down when DEVONthink on iOS started to create the previews.

On the plus side, DEVONthink’s support was quick and helpful (without irony, these guys are really great 🙂 ) and they informed me that there are plans to include an option to turn off previews in a future release. Still, they fucked up here. Or rather, they considered a particular group of users, but did not consider the … more invested users. After all, how much space do a couple of preview images require?

Hmm, at least, a nice example that you should test changes in the software with actually used systems, including low, medium and high use cases. But also meh, I did not need such a problem this week, but perhaps I still have an earlier version on another device and can coax it onto my iPad. Which would mean syncing around 165 GB again. If I can upgrade to a previous version (rocking it like Vista 😉 ). Meh.