Don’t try to tell the customer what he wants. If you want to be smart, be smart in the shower. Then get out, go to work and serve the customer!
Gene Buckley, President, Sikorsky Aircraft

DEVONthink is the fundamental building block of my digital knowledge base. I keep my files in databases like “work”, “non-fiction”, “fiction”, “rss-feeds”, “notebooks”, and the like. The ease of use, the knowledge where something is (at least, in which database, which you can search separately by name, content, etc.), the easy sync to my iPad (DEVONthink 2 Go companion app), and much more … just brilliant.

Until they fucked up their iOS version by not calculating how much disk space preview images require in large databases (tens of GBs, apparently). Followed by missing features in their latest Mac software release: DEVONthink 3.0.

I really want to like the new Mac version, and yeah, I already bought it (so much for blind trust). But unfortunately, some people at DEVONthink seem to think they know what their customers should want. And judging by the discussion in the forum, they seem to think they should not want a Three Panes View (image blow, the two columns on the right, the rightmost one further separated in top (files) and bottom (content)).

Yep. A “simple” view on the data is what makes DEVONthink 3.0 currently unusable to me. Here’s the issue in a picture (doesn’t make that much sense unless you use DEVONthink). 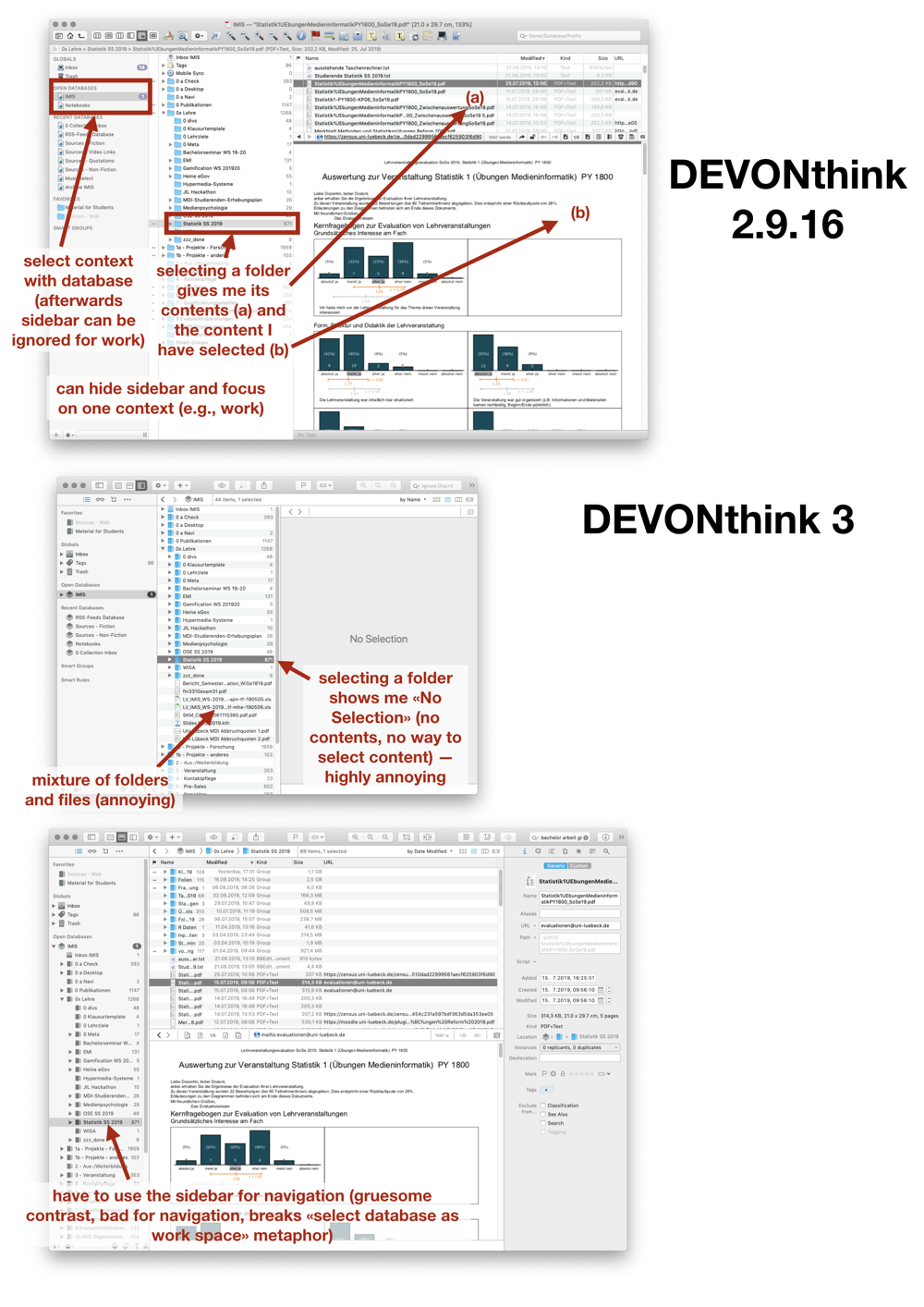 The new way of using a fricking sidebar for navigation within a database — actually expanding the folder structure — is just … wrong. It’s a sidebar. It does have its uses, for selecting databases, i.e., the context, but then being able to focus on the content. Now, you have to use it to get to your content.

This isn’t just “this is new” = “this is not how I am used to it” = “I don’t like it”. This is a different way of interacting with the data. It breaks the distinction between context (databases, sidebar on the left, easy to hide) and content (folders/groups and files). Now, DEVONthink is more like Mac’s Finder, no matter its advanced functions. It loses its unique selling point to me.

Which is a shame, because so far, my experience with DEVONthink and my interactions with their support staff were positive. Very positive. The “Hey, is there a way to group website clippings (PFDs) by URL.” resulting in “Here’s a script that does just that.” kind.

But those last two experiences, damn, where are they heading?

It’s one thing to forget to calculate preview file sizes. Okay, can happen, focus on one thing (narrow view on one problem), creating another. Here’s hoping for an update. Space on iOS devices is very expensive.

It’s also okay not to notice that many people depend on the Three Panes View. It’s not something people would say in an interview or user study (I’ve advised enough students in conducting them to know what they miss). The users just use it if they actually work with their own data. Not everyone, but a substantial amount of users. But it’s invisible/hard to verbalize, because it’s a view you select while you interact with the files and folders. And it’s with the files and folders where the action is. But it wouldn’t be possible without this view.

Nope, the really … discouraging thing is ditching something that clearly separated DEVONthink from Mac’s Finder, and then arguing in the forum that it’s better this way. That users should change. That something else is almost the same. That people (apparently at least two people) were confused about the view and did not see any use in it.

Ignoring user feedback and then trying to argue with them, to show them they don’t really need that feature? That way lies bankruptcy.

And DEVONthink is too good and too useful to end this way.

And yeah, by all means, give people what they need, not what they want, but listen to them when they tell you what they want … because they did use it, now notice they miss it, and the new method is just … wrong.

After all, DEVONthink is a productivity software. They shouldn’t try to push their ideal workflow. It works for them and that’s okay. But users are heterogeneous. They differ in their needs and workflows. No matter how proud they are of their sidebar. They should just allow for the workflow of the actual users. (And yeah, I’ve come to wonder how many actually use DEVONthink … these two fuckups should have been noticed within the company.)

So, at the moment, I wouldn’t upgrade to DEVONthink 3. At the moment. But I’d monitor what they do next. I’m still optimistic they fix those two issues. And even if it’s hard (And I don’t make it easy, criticism never is, esp. if it gets emotional. This is like a really useful and trusted tool suddenly falling apart. It’s not fun for me either.).

And yeah, I really hope they don’t go with their ego, but continue to do what made them an excellent company: Provide really useful software — for their users.