Etymology: From the Bible John 8.7 where Jesus tells the accusers of a woman of adultery, He that is without sin among you, let him first cast a stone at her.

1. (idiomatic) To act self-righteously in accusing another person, believing that one is blameless.

So, Retraction Watch had an interesting interview about a scientist who posted on Twitter:

“Just discovered that a paper for which I served as reviewer has been retracted. Feels like my time and energy were stolen.”
Martha Alibali on Twitter

She has a point, esp. if it was misconduct (don’t know the case), but also if it “just” was sloppy work. Bad research wastes good research — because good researchers have to deal with it, via reviews or by dealing with misconduct.

Not sure whether it was directed at the other comments or the interview itself. But while crude, I think it had a point, so I left a comment: 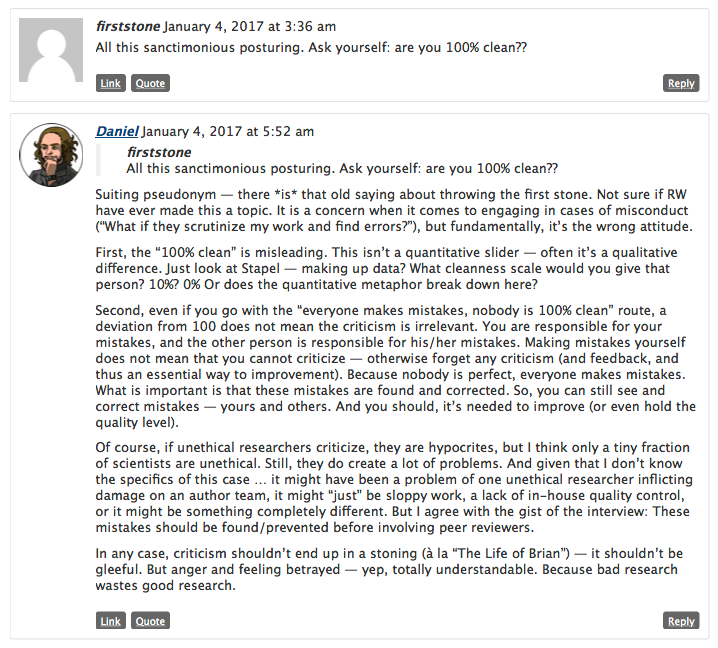 Suiting pseudonym — there is that old saying about throwing the first stone. Not sure if RW [Retraction Watch] have ever made this a topic. It is a concern when it comes to engaging in cases of misconduct (“What if they scrutinize my work and find errors?”), but fundamentally, it’s the wrong attitude.

First, the “100% clean” is misleading. This isn’t a quantitative slider — often it’s a qualitative difference. Just look at Stapel — making up data? What cleanness scale would you give that person? 10%? 0% Or does the quantitative metaphor break down here?

Second, even if you go with the “everyone makes mistakes, nobody is 100% clean” route, a deviation from 100 does not mean the criticism is irrelevant. You are responsible for your mistakes, and the other person is responsible for his/her mistakes. Making mistakes yourself does not mean that you cannot criticize — otherwise forget any criticism (and feedback, and thus an essential way to improvement). Because nobody is perfect, everyone makes mistakes. What is important is that these mistakes are found and corrected. So, you can still see and correct mistakes — yours and others. And you should, it’s needed to improve (or even hold the quality level).

Of course, if unethical researchers criticize, they are hypocrites, but I think only a tiny fraction of scientists are unethical. Still, they do create a lot of problems. And given that I don’t know the specifics of this case … it might have been a problem of one unethical researcher inflicting damage on an author team, it might “just” be sloppy work, a lack of in-house quality control, or it might be something completely different. But I agree with the gist of the interview: These mistakes should be found/prevented before involving peer reviewers.

In any case, criticism shouldn’t end up in a stoning (à la “The Life of Brian”) — it shouldn’t be gleeful. But anger and feeling betrayed — yep, totally understandable. Because bad research wastes good research.

And yeah, I’m in the habit of taking screenshots/exporting the page to PDF whenever I leave a comment — I’ve learned that it’s a good practice. I often write comments to think about the issue myself and to get other people’s perspectives on it. Unless I’m shitposting, but that’s usually on Reddit. So I like to think about them later.

However, there have been cases in which comments I liked/learned from have been deleted, or the site simply vanished. Not to mention the “there was an error posting the comment” situation, because I wasn’t logged in (also usually on Reddit). So, it pays to save them — at best prior to hitting the send button. And no, it’s not that I think everything I write is gold, on the contrary. That’s why I write, to make it better.

So yeah, vanished from that site (going meta, I now also feel that my time and energy were stolen). But hey, now it’s here. Still a chance for feedback.