“This is from an independent study that I have faith in. 30% of workers plan to steal from their employers, 30% give in to occasional temptation, 5% will commit fraud regardless of circumstances, 85% will commit fraud given the circumstances.”
“Just out of curiosity, what are the right circumstances?”
“Need, opportunity and the ability to rationalize their behavior, it’s called the fraud triangle.”
Sam and Leo in “The West Wing”

I have already used the above quotation when I wrote about plagiarism, but actually it makes sense to see all scientific misconduct by using the fraud triangle. And apparently, the fraud triangle really is a thing, not just a made-up reference in a TV series. It seems to go back to the works of Donald R. Cressey. And yeah, while it was for occupational fraud, it fits — in my view — perfectly to scientific misconduct. Actually not surprisingly, given that science also is an occupation.

I’m not sure whether it has been done before, but I applied the fraud triangle to scientific misconduct by looking for specific pressures, rationalizations, and needs. In the following picture, I have added the speech bubbles to give some examples: 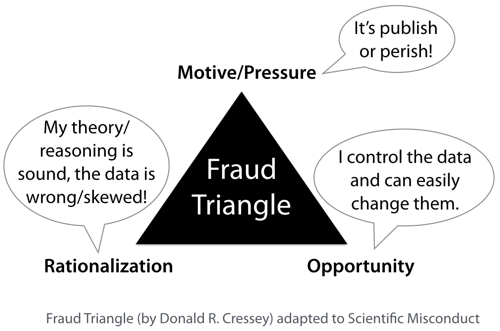 It seems that the conditions for fraud are easily given in many areas of science:

So, looking at the conditions in science, it’s actually a pretty vulnerable situation for fraud. This does not mean that all, or most, or even many scientists commit fraud. But the pressure, the rationalization, and the opportunity is certainly there. And while outright fraud in the sense of data fabrication or falsification might be (thankfully) rare, my assumption is that these factors might win when it comes to doing “questionable research practices” (e.g., dropping variables or cases, or running a couple of studies and reporting only the ones that get significant).

Looking at the Wikipedia entry on the Fraud Triangle, and especially this citation:

“Of the three elements, removal of Opportunity is most directly affected by the system of internal controls and generally provides the most actionable route to deterrence of fraud” (Cendrowski, Martin, Petro, The Handbook of Fraud Deterrence).
from http://en.wikipedia.org/wiki/Fraud_deterrence#Fraud_Triangle
(yup, sloppy citation, deal with it, it’s a blog 😉 I’m more worried that this posting is a case of parallel creativity)

it seems that science could (and should) go the same way. Less opportunity to change (“correct”) the data. Perhaps even going so far as having the data automatically copied into tamper-proof repositories. While there will be scientists who will find a way to bypass any measures (WE ARE SCIENTISTS!, after all! ;-)), addressing the opportunity to commit fraud seems to be the way to go.

The pressure will stay the same, esp. with the huge amounts of PhDs all competing for the same limited positions. And likewise, if you don’t believe you are onto something — which also might provide you with a rationalization for fraud — most scientists probably would have quit much earlier (although that would also prevent fraud, but at the cost of great fraud-free findings). And I am not sure that courses teaching the importance of honest science really have a chance at reducing the rationalization either.

Anyway, what do you think?

Well, giving that I know a blog I respect very much is likely going to link to this posting (thank you 🙂 ), I did a (relatively smart) search for “fraud triangle” and “scientific fraud” and established that this is certainly not the first posting applying the fraud triangle to scientific research. Among others, the blog posting on FraudBytes did so in the posting on “Scientific Fraud: Autism and Child Vaccines” in 2011. Well, good to know that parallel creativity works (this way, interesting ideas are only delayed, not precluded), and also a good idea not to write these postings as a scientist with a doctorate in psychology writes a paper, but as a “normal” human being. “Opinion pieces” do have their uses. 😉

I have written more on Stapel’s case in Flawed Science — Or: Where do we go from here? There’s also a kind of follow-up posting regarding one major red flag: Science, Fraud, and the Flow of Data. In case you ever have to blow the whistle, have a look at the posting: Research Ethics and Whistle-Blowing, esp. the Gunsalus paper. There’s also “In Science We Trust, In Scientists We Shouldn’t.” which might be interesting, or “Fallout of Faking Data in Science“. There’s also a series on Plagiarism, one about Science itself, and one about doing science. Enjoy. 🙂

(And please, if you find anything useful or not useful or want to discuss an issue, send me a message. I enjoy conversations about science.)