“Wait a minute, Doc. Ah… Are you telling me that you built a time machine… out of a DeLorean?”
“The way I see it, if you’re gonna build a time machine into a car, why not do it with some style?”
Marty McFly and Dr. Emmett Brown in “Back to the Future”

While I jot down a lot of ideas with the “Notes” app on my iPhone (you can do so one-handed while walking), there are times when a note on paper is needed. Drawing still works best on paper for me, and sometimes you like to leave a note for someone. For this purpose, paper is still indispensable. Personally, I love Clairefontaine notepads — given that they are cheap, the paper is very smooth, and that I cut them down in half which allows me to easily say: “Screw it, I’ll write down this idea, even if it is really bad.” No barriers to capturing stupid ideas in scrawly handwriting that a Moleskine notebook might provide. And stupid ideas might turn good or ‘interesting’ with a little more effort. 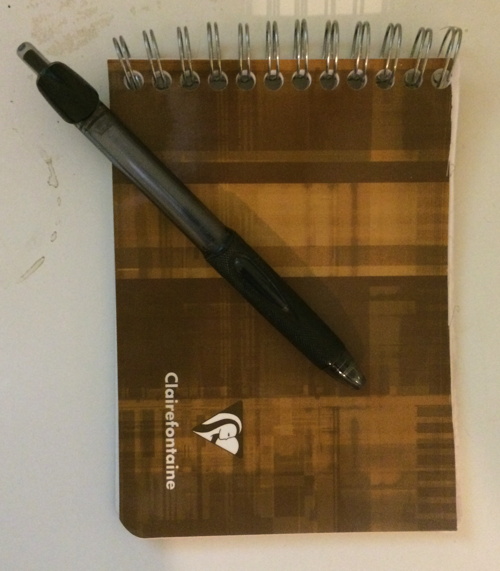 However, these Clairefontaine notepads are rather … uh, in a “creative individual” style. They don’t go unnoticed in a more formal environment — in a bad way. One the one hand, who cares as long as you capture the ideas. But on the other — it is unaesthetic in such a setting, and in bad taste. It is also distracting, which might lead to missed ideas. And there’s the “choosing which battles to fight” aspect.

So I was looking for something to use that is more unobtrusive in formal settings. Moleskine (-like) notebooks might be the logical choice, but like written, that would place barriers on capturing I don’t want. However, Moleskine might actually be a valid choice — if it is already “spoiled” (to remove the psychological barriers), yet still looks nice on the outside. Taking inspiration from Moleskine iPad covers, I combined a Moleskine notebook with the cheapest but most useful type of paper I could think of: Post-Its.

It’s a prototype, but the notebook still looks like a normal Moleskine notebook: 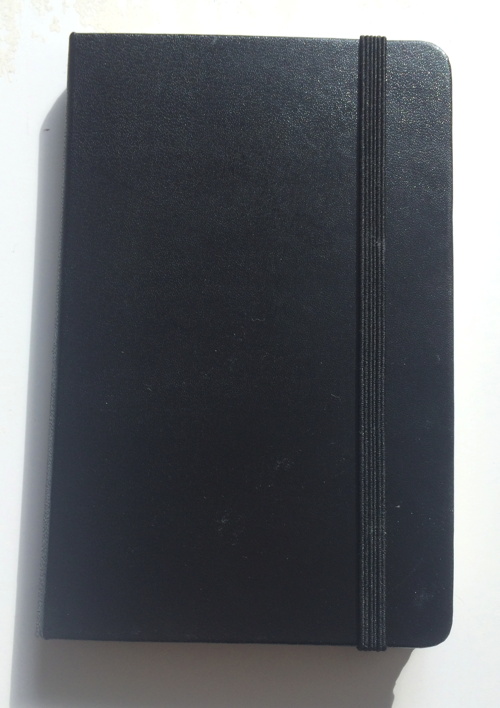 However, once you open it, the pages are glued together and there’s a Post-It shaped hole cut into the pages: 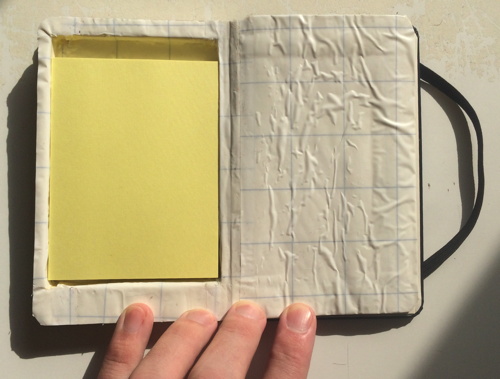 I thought about gluing half of the pages together first and cut holes in each of these halves. Opened, you would have Post-It’s left and right. However, I am not sure that it would have worked. Using this one hole seems to be more stable and more usable.

I used Magic Chart foil to protect the pages from heavy use. Unfortunately, I was sloppy in gluing the foil to the pages — the crinkles look atrocious. And thinking about it, using a foil that sticks to the wall due to static charge is a bad idea. It draws dust and the like. Still, it’s a prototype. The nice thing is that you can refill the Post-Its easily, so you always have enough paper. The notebook isn’t suddenly full. Furthermore, you can easily remove Post-Its. That’s why the hole is a bit larger than the Post-It’s, to allow for easy removal. 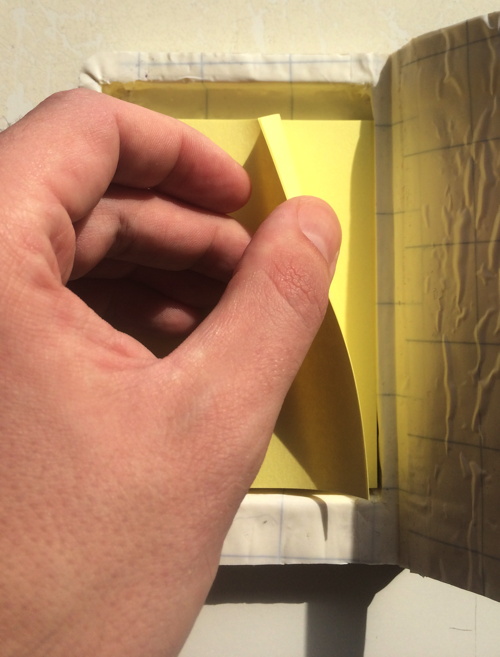 The only thing I still need to do is to put some double-faced adhesive tape below the Post-It paper block. The Post-It adhesive is not strong enough to keep the whole Post-It block in the notebook. Unless attached more firmly to the foil, it might fall out.

The folder in the back of the Moleskine notebook is still there, e.g., for Post-It notes you want to keep. 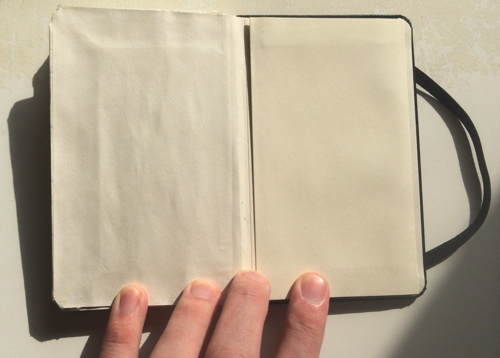 So far, this gutted and refilled notebook works fine and it looks nice (save for the crinkles). But I’m not sure that it’s that unobtrusive, though. 🙂

Update 2014-05-25: Using double-faced adhesive tape worked like a charm. The post-it block now stays in place, even when I open the notebook and turn it upside down.