It is perfectly easy to be original by violating the laws of decency and the canons of good taste.
“Over the Teacups” by Oliver Wendell Holmes, 1891 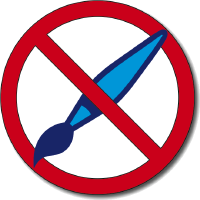 In most cases when people try to symbolize creativity, they stick to images of wild brushes and colors, colored boxes, and so on.

Is this first association of creativity right?

I don’t think so. I think this first association of creativity is dead wrong. I think it sends the wrong signal, like all you need for creativity is some colors and there you go — you can be creative simple as that.

But it neglects an important aspect: The knowledge and skill that is needed.

Anyone can draw a picture that has never been drawn before, especially with wild bushes where you cannot even be accurate. But that’s not creative. If it were, we would all be cherished artists — or rather, art would loose its appeal because anyone could do it. To be creative, you have to understand your trade, you have to be very skilled at what you do, to create exactly the vision you see in your mind, to convey exactly the emotions you want to convey, to get people think with a drop of ink (Voltaire, I think). As said, creativity is not madness, it is good for something. And you have to know the prior works to avoid merely repeating the past.

That needs more than a brush and some colors.

It’s similar with “conventionally” “creative people”. The prototypical creative, be it in art, in software design, or in science, has wild untidy hair and shows gestures and general behavior that would be regarded as childish and unacceptable in any other person. Sure, this person often breaks up the all-to-serious behavior of other people with his act, but how can any person that acts this way be creative? How can this person learn the necessary skills, gain the knowledge, that takes time and serious study?

I think in most cases these conventionally creative people are either extremely serious and devoted real creatives who wear a mask in public because they think it is expected from them (and over time, this mask becomes their second skin) — or they are false creatives that simply cover themselves with overt indicators of creativity but do not produce real creative works. Instead these false creatives bring a lot of confusion into groups and then integrate the results in the way that they come out on top. In the best cases their energy can bring a group forward, if the group is willing to pay the price that the creative takes the lead, in the worst cases the creative scoops up a lot of ideas and presents them as his own.

For some large projects this is needed, but in most cases I think I would prefer to work without the ‘help’ of these conventional and false creatives.