Trying out a few apps recently, I found some of them offer icons/banners/themes for various causes. Usually it is gay pride, trans activism, or «I stand with Ukraine» flags.

On the one hand I understand the need to care for something. Especially if you value it and see it as … well, threatened. Well, however threatened these causes can be if billion dollar companies support them (at least in the West, middle eastern Twitter and Chinese movies seem to be … different).

And yeah, some people are personally affected. An eMail to an Ukrainian software company I send out got the following auto-reply:

«Due to the full-scale military attack by Russia on Ukraine, it may take longer than usual to answer your message.»

And yeah, some causes are worthwhile. After all, people should decide what’s best for their lives.

But when I use an app, I want to use it as a tool. Something that does what I want it to do to achieve my goals. I am usually focused on these goals and do not want to think about anything else. Anything superfluous distracts. This can even be a company name on a physical product. I have put blank stickers on company logos of physical products to remove that distraction (esp. whiteboard erasers).

That idea that tools should be tools without ideological markers might be pretty common. Especially in the area of physical tools. At least in the hardware store I frequent (quite a lot, recently), the tools do not come with rainbow stickers or pink triangles.

I also doubt these signals actually do any good. Instead, they smack of virtue signaling. What is their actual impact, despite indicating the developer’s ideological position? Hmmm, yeah, some activists can become pretty intolerant, even to a simple «you do you, I do me». So that virtue signaling might feel necessary for developers to survive. But is that a good reason?

(And hey, very likely that some people get angry at this «you do you, I do me, but let me work in peace» posting. 🙂 )

I also wonder where these ideological markers will lead too. What is next? Tools that nudge users in a certain direction? That can only be used for specific purposes or create products that favor a specific point of view? After all, the developer is no longer offering a tool but promoting an ideological position.

I wonder. After all, Microsoft Word has «Show your pride» in the preferences: 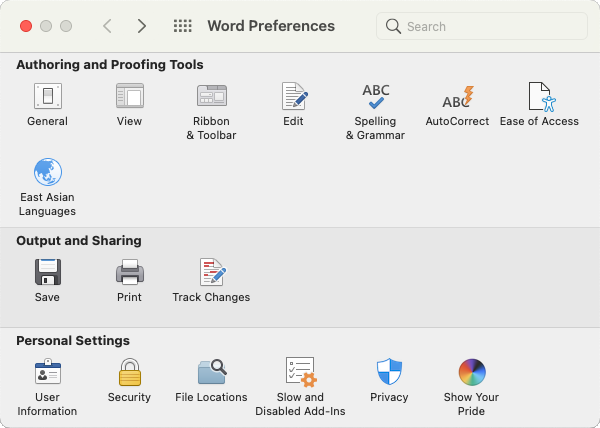 It would not be hard for them to adapt their spellcheck and grammar correction to … support so-called inclusive writing (if they haven’t already).

Taking to its logical conclusion, tools with ideological messaging are not only distracting. If they move into the nudge/control behavior area they will put thought and/or action on rails.

And in the end, make creative ideas less likely.

To end on a positive note. An easy bypass would be to allow users to customize their tools. Including the icons and the theme (like in most browsers). I once changed the Scrivener logo back to its original logo, because I liked it better. I stopped because I had to redo it with each update. But it was nice to be able to exchange the icon. This kind of customization would be a way to still allow promoting certain ideologies while letting everyone else (my guess: the majority) work in peace. That might be a win-win. Well, except for the activists whose goals are promoted by the billion dollar companies. 😉