«As a woman, I find it very embarrassing to be in a meeting and realize I’m the only one in the room with balls.»
Rita Mae Brown

It’s something that cuts through those who have thought about an issue, and those who haven’t. But seriously, if you look for sexist comment, you can’t go for the surface level terms. Yeah, women are called sluts, but men are called … different terms, among others, cowards. Just look at the following table: 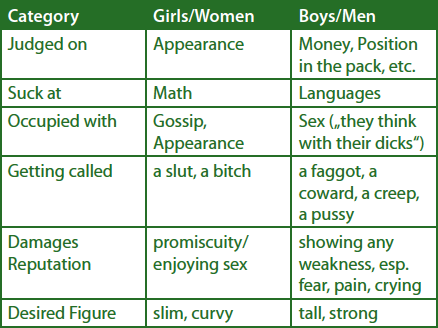 And I’m wondering, are we able to call women out for their cowardice?

Because let’s be honest, being a leader is a difficult job. And some actions do require an incredible amount of courage, or risk taking. If only because everything in the short run says X is a terrible idea for which you will pay dearly, but perhaps, just perhaps, doing X will be the better decision in the long run.

And yeah, I’ve started to think about it after seeing a female university employee going the bureaucratic way to put pressure on an employee (luckily not at my university). You know, the backstabbing social exclusion way. It’s a prototypical female behavior. The ones girls show in middle school to exclude other girls.

And I wonder, would you call it out? Would you point out that a female colleague uses backstabbing behavior to solve issues? That she hides behind other people, or even behind her sex?

And this is not to say that women cannot be courageous (see quote in the beginning), but they can also be cowards, and how do we act then? Hmm, an another later thought, I don’t mean while working in jobs in which courage is part of the job description (like police, military, fire fighting), but in any job or situation. We expect courage from men — it’s an insult to be called a coward. Do we expect it from women, too?

Update: Minor edit because the example was written too similar to another situation, and added a paragraph to add precision to the question.