Realize that sleeping on a futon when you’re 30 is not the worst thing. You know what’s worse, sleeping in a king bed next to a wife you’re not really in love with but for some reason you married, and you got a couple kids, and you got a job you hate. You’ll be laying there fantasizing about sleeping on a futon. There’s no risk when you go after a dream. There’s a tremendous amount to risk to playing it safe.
Bill Burr

After building a basic bed frame and testing it for a few nights, the next step was to raise the head of the bed about 30 cm. Reason being, I suffer from reflux. In short, the stomach muscle to the esophagus does not close completely, so if I lie horizontally, stomach acid can reach (and burn) the larynx. One thing that might help is sleeping at an angle. The recommended height of the head-end varies depending on the source, but usually about 20-30 cm, meaning an angle of 8.627° over 2 m (funny, suddenly school geometry is useful again). Raising part of the bed is not enough (e.g., using cushions beneath the head), as it would compress the stomach and make things worse.

So sleeping on a slanted bed it is.

Finding a way to put the bed askew wasn’t easy. With my old bed, the metal construction made it easy. Just put a few books under one end et voilà. Who cares that the feet of the bed aren’t completely touching the ground. Steel is steel and it doesn’t bend. Not with my weight anyway. But my new bed frame is made of wood (and rather … economic wood).

Normal feet for furniture would not cut it (hardware store had a few). They would be at a 90° angle to the bed frame itself, meaning the feet would not completely touch the ground — see a) in the following figure. The main force would likely be downward (not a physicist), meaning there would be a huge risk of the feet simply breaking once there is … vigorous movement on the bed. 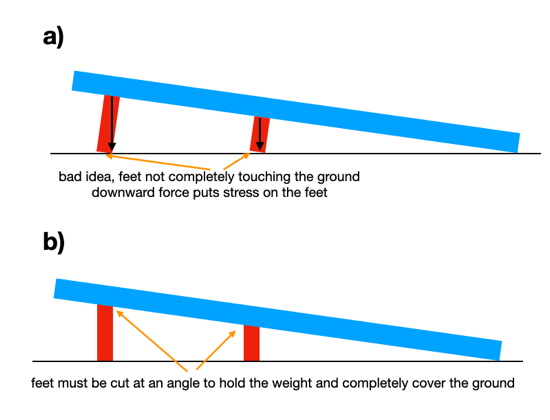 Instead, the feet have to be cut at an angle (of 8.627°) to attach to the slope of the bed and completely touch the floor — b) in the figure above. Which meant going for a wooden beam and cutting it at different lengths — with one end at that slope. Unfortunately, the hardware store did not cut beams in that thickness, so a handsaw it is. (I know myself too well to go for power-tools — save for an electric drill. A buzz saw would … be a very very bad idea.).

For the first three feet I used a saw with a thin blade, which worked okay, but made the cut very uneven. For the next six I did use a ripsaw and it went much, much better (and faster). Much cleaner cut.

After testing the length and adding felt to the legs (don’t want to damage the floor): 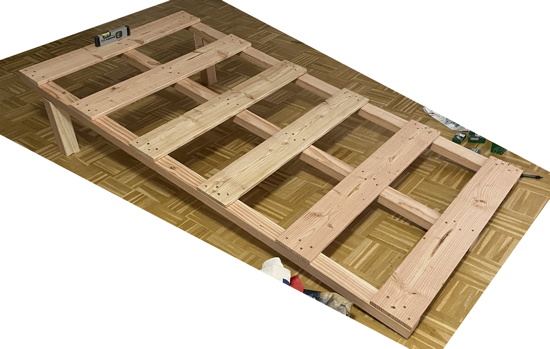 After lots of sawing, testing, and screwing (yeah, might be a slight overkill): 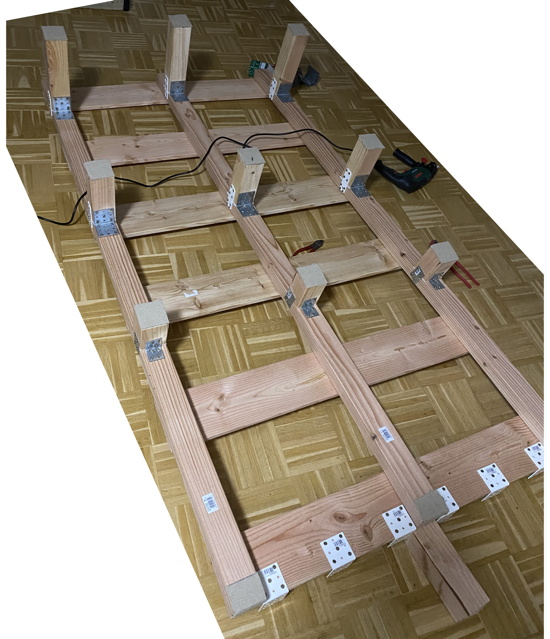 And finally the bed frame was ready: 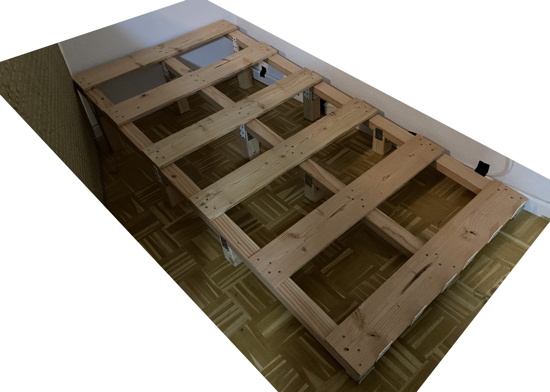 And the mattress (tatami mat) should be held in place by the metal angles at the foot-end: 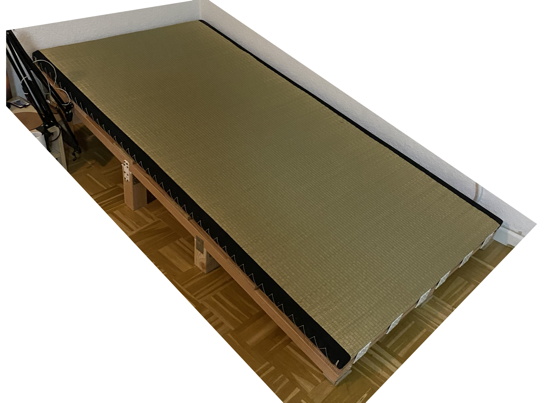 Not there is only one thing: Testing it. I see three likely possible outcomes of this nights sleep:

Well, I’ll see in the morning, or somewhen this night. At least it was nice building something with my own hands, even though I could have bought a cheaper solution. And without having a blister in the middle of my hand. 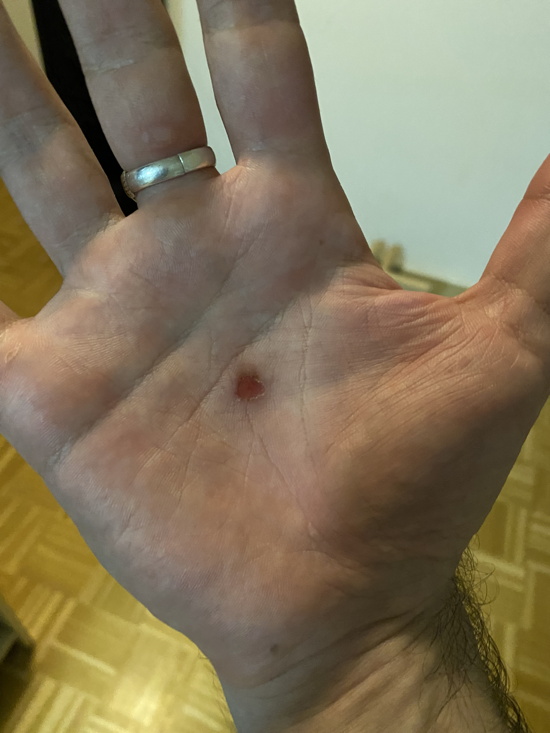 Not exactly a stigmata (would also be on the wirst, not the palm), but combined with carrying thick 2m beams of wood 20+ minutes through the city, I got a distinct Jesus vibe.

Update after one night: Hmmm, worked out fairly well. Problem was mostly the blankets, or rather the fur I also sleep on (also use it as blanket, you spend roughly 7 hours a day in bed, so why not make it comfortable). The Goza mat is woven in a way that it has horizontal strands, which provide enough friction, both on the tatami mat itself and on anything that lies on it. Even the raw side of the fur. Only I did slip down over time, as the fur itself does not provide enough friction. But once I removed it from beneath my upper body and my upper body was resting on the goza mat itself, I stayed in place (still had another sewn fur to cover me). Overall construction was stable as well — for the first night at least. Only problem was getting up — it was just so very very comfortable just lying in bed. So, yeah, cautious success so far. (Still cough in the morning, though.)

Update 2 (sometime later after one night): Waow, body feels similar to after a good massage. Feels like lots and lots of little tension points in the body are released (esp. at the neck and torso). Hope this will last.

Update 3 (a few nights later): Hmmm, it does not last — the effect of sleeping on a slop, with all those knots in my body (esp. neck and torso) unknotting themselves. I just wake up without that much tension. In a way, that’s very nice. But a downside is … I won’t feel better during the day. After all, that’s what makes a massage so relaxing — the prior after contrast. Sigh. But hey, I guess the construction works out. Yuppa 🙂 Should have done this much, much sooner, but at least one thing came out of my vacation.

Update 4 (many nights later): Okay, love that bed. Just switched out my tatami cushion with a bolster(?) — well, a kind of round cushion that works much, much better when the bed is at an angle. So yeah, that one worked out — without jinxing it — very very well.