«To choose a good book, look in an inquisitor’s prohibited list.»
John Aikin

We don’t have official censors like the Catholic Church anymore. But there is still censorship. It’s frequently indirect, e.g., when politicians “incentivise” social media companies to remove postings with the threat of heavy fines. But it’s also done “by the people”. It seems Mill was right to be concerned about the “tyranny of the prevailing opinion and feeling”. Although that cancel culture is frequently done by a small group of very loud and obnoxious social justice warriors.

I became first aware of this trend to remove people or their works from the public space when following the news in the USA, but it is also happening in other countries, including Great Britain and Germany. And it is done online and offline. And it has reentered the academia by striking at academic journals as well.

One ugly case regarding academic journals was the retraction of an article entitled “The case for colonialism”. Protests included 15 editorial board members resigning and a petition with over 10000 people who signed it. It’s actually interesting to read the petition:

Looking at the journal’s information about the case, it was not “rejected after review”. One reviewer argued for rejection, the other for acceptance after correcting minor issues (minor revision). There are also no actual arguments. They use fallacies like an argumentum ad populum (“widespread condemnation”) combined with appeals to authority (“from scholars”), vague criticisms (“lacks empirical evidence, contains historical inaccuracies”), strange wordings (“spiteful fallacies” — fallacy would be enough, if they would say what they considered a fallacy, and who decided it was spiteful? I would be concerned about assertions being false), absolutisms (“utter lack of rigor”) and the like — lots of red flags. It’s also interesting that the mob wants the editors head who integrated the reviews and asked for a major revision (“Editor or editors at Third World Quarterly allowing this piece utterly lacking in academic merit to be published should be replaced from the Editorial Board.”). And of course, these people claim they are still for freedom of speech. If you’re intelligent enough, you can rationalize anything.

And it didn’t stop here — what finally made the editors to retract the article were credible threats of personal violence (Retraction Watch) (see also retraction notice here or below):

That’s an academic lynch mob, done by lots of people reading only this interpretation of an issue, combined with some idiots who think threatening violence is an argument. Well, unfortunately, in this case it worked. It’s easy to say as an outsider, but I think that retraction was a mistake. Yeah, I would also take the threats seriously, but this behavior should not be rewarded. I think a couple of journals in the same area banding together and publishing the article in all of their journals would have been the better strategy. Akin to a way to deal with Islamic terrorism after the Charlie Hebdo shooting (which was suggested but unfortunately not taken either). But it would have been a way to show to these thugs that this does not work. You cross a line when you think violence can be used, or even threatened.

Is the article as bad as the mob and the thugs claim? No idea. I read it, found it interesting in the sense of “It is the mark of an educated mind to be able to entertain a thought without accepting it.” (Aristotle) and I think it would make an interesting piece of discussion as this is a complex topic. Then again, I am not an expert on foreign policy. But what I do know is that it is a very bad day for science when we’re back at “you may not say it or we will kill you”, or have your head in another way. 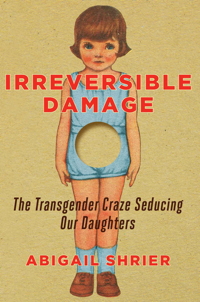 And that brings me back to the topic of the posting — what were the consequences of this retraction attempt? Likely that many, many more people did hear about the article and read it (you likely being among them). A typical Streisand effect. And yeah, judging by the books and articles I only noticed because of the public outcry by some snowflakes and the resulting Streisand effect — sometimes these houses are very interesting to explore. For example, “Irreversible Damage — The Transgender Craze Seducing Our Daughters” by Abigail Shrier was very interesting to read, both in style and content. Or Tomas Hudlický’s “‘Organic synthesis–Where now?’ is thirty years old. A reflection on the current state of affairs”.

In this sense, yeah, Aikin is right in the sense: «To choose a good book, look in an inquisitor’s prohibited list.»