Toby: «No, sir. In his defense, he caught the bad note. He came to me. He made it important.»
Leo: «Yeah.»
Toby: «He wasn’t distracted by the fact that his office was filled with bicycles.»
«The West Wing»

How do you imagine a setting for creative work? Some people, perhaps not the creative ones, imagine it with colorful and … unconventional furniture, a bit like something a child in kindergarten would love.

Personally, I like a white canvas. In itself that would be paralyzing — as nothing is as paralyzing as a white sheet of paper. But the stimuli for the creative work get added in the beginning of the creative work — and they are impetus enough. No children’s toys needed. It’s one of the reasons I love my office — it’s got white walls and four(!) whiteboards (okay, it’s designed for 2-3 people, but good people are hard to find). The ideal canvas to be creative.

But also one in which even tiny distractions stand out.

Recently I did some conceptual work for an evaluation sheet. I did put all the needed information and prior versions on the wall — in this case a whiteboard: 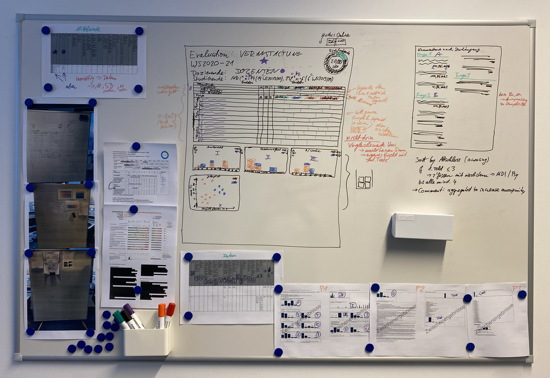 and started sketching. Not complicated, not that creative, especially as a co-worker and I had already sketched a few ideas … a year ago.

While (classical/non-vocal) music took care of the possible auditive distraction, I found the label on the sponge really distracting. I removed the Legamaster stickers from the Whiteboards, but the Logo on the sponges was fixed. Yeah, focus was a problem and even a tiny irrelevant aspect distracted. So some paper, some tape, and distraction shoddishly removed (I’ll do it better with white tape later).

And yeah, I really wish companies would stop putting their logo on the products themselves. But even though it’s a tiny thing, it’s something to consider when you prepare to work creatively.