«Some early adaptors were faced with a few challenges.»
PR Lady in Mac Ad about Microsoft Vista

DEVONthink still is the corner stone of my information infrastructure. It contains all my data — whether for work, for notes, or for fiction or non-fiction. It just keeps all those files in a nice and pretty package, easy for (selective) searching and data transfer.

But their DEVONthink 3 version sucks balls.

I don’t want to talk bad about the company. They don’t have it easy. Few people, a complicated piece of software, changing conditions (especially if you consider the iOS sync). I don’t envy them.

But I also think that they reached an (hopefully local) peak with DEVONthink Pro Office 2.11.3. The “Three panes view” is just brilliant to deal with data. Really useful, and (for me) intuitive. But unfortunately, they seemed to have listend to some designer too much in DEVONthink 3. And they seemed to have hired the wrong person for customer support.

Never argue that something is actually so good, the users just don’t see it. Just don’t.

Or as Gene Buckley put it:

Don’t try to tell the customer what he wants. If you want to be smart, be smart in the shower. Then get out, go to work and serve the customer!
Gene Buckley, President, Sikorsky Aircraft

But yeah. So even after updating to Big Sur (and I did wipe my hard drive and did a virgin install) and giving DEVONthink 3 another chance, I switched back to DEVONthink Pro Office 2.11.3. It just provides more functionality, not only counting the three panes view, but also regarding the task bar icons.

And — with some limitations like not showing the amount of files in groups correctly or that ABBYY FineReader does not work — it does work (as far as I know) on Big Sur. And at least better than DEVONthink 3, which crashes when I want to enter the Preferences.

And I really hope DEVONthink 3 takes its ancestry seriously and takes a few pages from DEVONthink 2.11.3’s book.

P.S.: I really wonder where DEVONthink is going. Perhaps they realize they went in the wrong direction. After all, they can listen to “experts” — or see where their customers are going. I’d go for the later. But perhaps I am wrong. Perhaps version 3 is a success. I doubt it. I still think DEVONthink got a mental model problem. Most people do not understand just how fucking useful that app really is. To have whole sections of your life — e.g., notes, work, fiction literature, non-fiction literature, documents, and much more separated in contained databases. That is incredibly powerful. But they don’t show it. Instead they go (if I assess them correctly) the dumbed down route. And they have few if any power users, the multiple GB kind of data people: 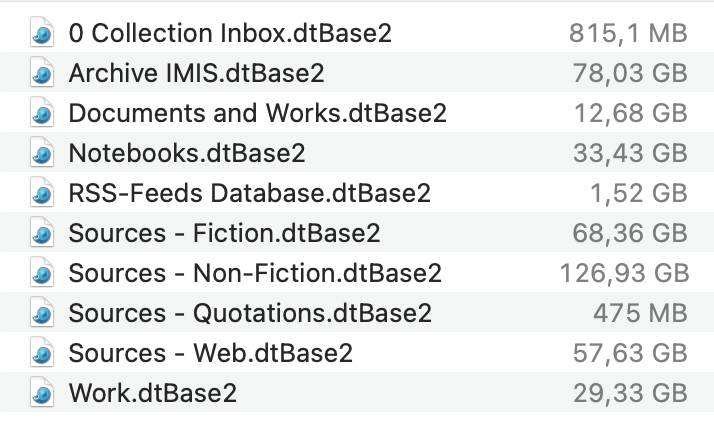 And for how … incredibly useful their software is … that is really a shame. They are better than version 3. They are better than some designer (hey, I am a psychologist — I got a Dr. rer. nat. — and I work in human-centered development at a Germany university, so yeah, in my assessment, that designer is … not that good). I just wish they would realize it.

Update: With the latest update, at least I can access the preferences in DEVONthink 3 again. Small mercy.