Creativity is allowing yourself to make mistakes. Art is knowing which ones to keep.
Scott Adams

In the book “Sketching User Experiences” by Greenberg, Carpendale, Marquardt & Buxton (2012), there is a synopsis of Buxton’s “Sketching User Experiences: Getting the Design Right and the Right Design”. I strongly recommend having a look at that book, as it is really useful when it comes to design, esp. when it comes to visual interface design (yeah, the screen fetish is a problem, but if you design a screen, at least be very good at it).

Buxton differentiates between “Getting the Design Right”, i.e., following an (usually the first) idea and working it out, improving it — which is a problem if that idea lead to a local maximum. It can be improved, but other ideas lead to much better realizations. But they were not considered. So, he argues for “Getting the Right Design”, which means exploring different ideas to see which ones lead to the best solutions.

Specifically, the authors summarize his work:

Getting the Design Right

Getting the design right is about starting with a single design idea – usually the first idea you generate (left figure), and then continually evolving, improving, and developing it (right figure). As seen in the figure, we can think of the design space of an idea as a 3D hill. The best possible design of the idea is at the hill’s peak, and other lesser designs are below. The goal is to discover the optimal design solution for that idea, ie, to get as close to the peak as possible. This is iterative design, and how most engineers and software developers are trained to think about design.

The problem is that the above design can only be as good as that particular idea. If the idea is not a good one, then the ‘best’ design solution will only be so-so. Consider the figure on the right, which envisages how other design ideas may have fared in the design space. 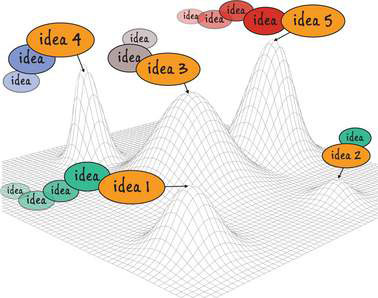 No matter how hard you work on that first idea, you won’t get to other potentially better ideas. The point is that if you consider many ideas rather than a single one, you may find a better overall solution. Computer Scientists even have a name for this problem: local hill climbing, where the local maxima is potentially much less than the optimal (the global) maxima.

Design as the process of elaboration and reduction implies that design has two places where there is room for creativity:

1. the creativity that you bring to enumerating meaningfully distinct options from which to choose

2. the creativity that you bring to defining the criteria, or heuristics, that you apply to help make your choices

Getting the Right Design

Getting the Right Design is about considering many other ideas and then choosing between them (see figure below, left). That is:

– reflect on all your ideas;

– choose the ones that look most promising and develop those in parallel;

– add in new ideas as they come up.

The right figure illustrates this process as a tree, where multiple solutions are developed, and choices made about which of the one or more branches ideas – are worth following.

It’s only a synopsis, but after that extract here, he goes into different development models/approaches and the rest of the book deals with how to sketch ideas to see which ones are good. And yeah, bad sketches are okay. I can’t draw (or even sketch) either, but I can make my ideas visible enough to see whether they work out, and so can you.

As said, the whole book is very good. Highly recommended (and yeah, the images are a bit dated, but its the methods that count and they still can be applied as described).