«Hier liegen meine Gebeine,
ich wünschte, es wären deine.»
[«Here my bones lie,
wish they were yours.»]
Unknown (but used by my father)

As written in the previous posting, my father died recently. Shortly after his 70th birthday, he had his first stroke. The second, earlier this April, came about six years later and was much more severe. As deaths go, it could have been much, much worse. But then, it’s still fresh and I’m still working on it.

One thing that made his death easier (for me), was, that I expected that he would die. More than the usual I expect everybody to die. He was extremely active, but he was also getting old. Even before his first stroke, I did consider him dying soon and gave him a notebook to write some notes for his autobiography (see also this posting). 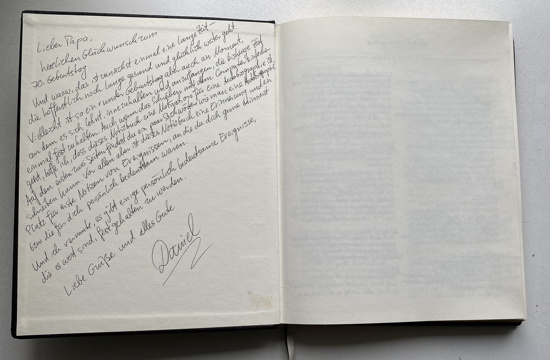 And after his first stroke, shortly after I gave him the notebook, I made the time to, well, spend time with him. Especially after it became clear, that he would not write anything in the notebook. In part, due to a hemispatial neglect, in part, because it just wasn’t his way.

So, we went fishing.

Only a couple of times in total, but that time gave us a reason to talk. I learned a bit more about his life and his youth, and he a little bit about mine (and I found out that I really like fishing, even though we only caught one fish … in total). And yeah, I might have preferred some notes. I mean, I went through his stuff this week and I found hardly any personal notes. Which is strange, very strange. But it worked out this way. No notes, no recordings, just talking.

In this sense, it doesn’t always have to be a fancy autobiography, especially when time is short. Often, all you need is time — and an excuse to talk. And that’s not that hard to find.

P.S.: And yeah, two things could have gone better. First, I could have visited him shortly before the stroke, but I did not want to travel through half of Germany and potentially bring with me a virus that predominantly kills seniors. Now, and (hopefully) unrelated to me not visiting him, I had to travel home twice. Once to be at his side when he died, then to bury him. (You can say what you want about the pandemic, but the trains are comfortably empty, almost had a whole carriage for myself.) Second, I found the funeral — which was (thankfully) done without a mass due to Corona — extremely hard to endure. I have just a completely different view of God, Death, and what (if anything) comes next. But even as an agnostic I can give kudos to the deacon — he did it very well, and characterized him very well — for someone who did not actually know him. Hmmm, perhaps my brother or I should have spoken at the funeral. Hmmm, and yeah, there’s no chance in hell I’m going to attend the funeral mass. And yeah, being cremated and then buried beneath a tree is actually a nice idea.