Good design is a lot like clear thinking made visual.
Edward Tufte

As written in this posting, DEVONthink presented an upgrade from DEVONthink 2.9.16 to DEVONthink 3.0. And yeah, it does have a lot of new features and design improvements. But what they also did was remove a view on the data, which was almost exclusively used by a lot of users (judging by the amount of activity in that thread in DEVONthink’s forum). 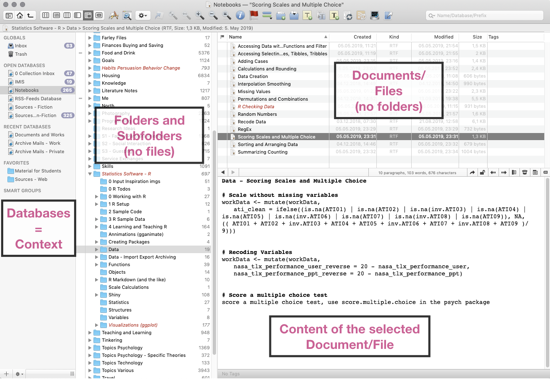 Removing a crucial view (for many users, including me) on the data is one thing and bad enough. What’s even worse is how people representing the support in the forum try to rationalize the decision:

while apparently (for other issues) seeing the heterogeneity:

It’s interesting that apparently, different working styles are expected and DEVONthink is apparently flexible, but this does not extend to one axed design element. First of all, again: DEVONthink is a great company. Their software is/was super useful. It was levels better than Mac’s Finder and made it possible for me to handle my digital life. But I get two impressions from the discussion:

Well, at least for a while I can use DEVONthink 2.9.16. And at least DEVONthink isn’t a data island. I can export my data quickly. But I’d lose a lot of functionality:

I get that the developers and programmers are proud of their new features, of the way they imagined interaction with data to be. And that it might look ugly (incl. in the code) to reintroduce something that was decided to omit. But when hard-core power-users tell you something is missing, don’t let the guys in the forum try to defend your design decision. If you have to explain a design, it has failed. Granted, that always was a problem for DEVONthink — you don’t see its power. But it had that power. Castrating the software is not the way to go.

Perhaps this is a storm in a teacup. Perhaps after getting the post-release bugs out of the way, DEVONthink will give users a better view on their data back (and fix it’s iOS preview image fuckup). I’m still hoping for the best.