You people always hold onto old identities, old faces and masks, long after they’ve served their purpose.
But you’ve got to learn to throw things away eventually.
Death, in «Sandman: Dream Country», by Neil Gaiman

No matter how creative you are — social interaction is important. The soft skills. The way you deal with others. Without them, it becomes hard to impossible to disseminate ideas, give feedback (hell, even being asked for feedback). And that severely limits your ability to improve things, to contribute.

In short, the best ideas don’t work if you can’t convey them.

And looking at myself — and perhaps this is true for others — the worst obstacle in achieving genuine communication is the mask I wear.

To explain, I took part in a few counseling sessions a few years back. I was unemployed, because that was better than to continue working in a poisonous environment that was slowly killing me. Of course, being unemployed kills you in its own way, if you define yourself by what you do, by what you contribute. It sounds nice to have “free time”. It isn’t. Anyway, these counseling sessions by the employment office were intended to help me figure out what I do next. (I leaped back into academia, and it was a very good decision to not let my academic experience end badly with the last institute, but that’s another story.)

The counselor was so-so. She wasn’t able to see that some people (yeah, even men) don’t see “earning a lot of money” as the primary motivators for work. She was working with generic templates, rather than looking at the person in front of her. But on one thing she was spot on (perhaps that was a template too, but this time it did fit).

She drew how she did perceive me (left side): 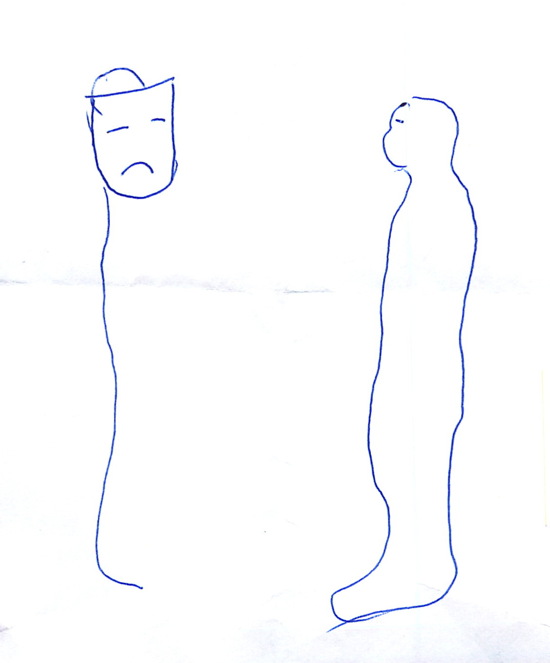 I wear a mask. Perhaps like everyone else, but it keeps people at a distance. And I know where it comes from. I think one of the worst after-effects of mobbing (extensively during school and for a shorter time during PhD, the later with a much better result) is that it can make you very guarded in social interactions. Basic trust in other people is undermined and you begin to present a mask. It’s not necessarily a false impression, but it’s one that does not allow for genuine interaction. It stops people short.

Information can be used against you, was used against you. And for that reason, you are very reluctant to share anything and are constantly monitoring who knows what. Of course, thinking a bit differently since childhood and the reactions that occurred from multiple people (parents, peer group, colleagues, etc.) did lay a perfect foundation for this maladaptive behavior.

And no matter how you think of yourself, others will react by what you present to them. They don’t know who you are, only what you show.

And if you present a guarded mask, slow to show any emotion (showing emotional regulation to the extreme) and very reluctant to share anything, they will react on that.

And going on what you convey, you won’t like the matching reactions. Not if you want to achieve anything in life, creatively or otherwise.

But hey, it isn’t that behavior can’t be changed back to something better … it’s just … harder.