After a certain point money is meaningless. It ceases to be the goal. The game is what counts.
Unknown

Gamification is the use of game elements and game design techniques in non-game contexts. In a nutshell, it’s motivational design and in a way, it has been around for quite a while. From frequent flyer points to tiers in credit cards, elements usually found in games have been used to motivate people.

And it can be quite easy.

To use a really simple example, imagine you have to copy a couple of books. You can’t cut off the spine, so you have to put each spread on the copier — again and again. Probably one of the most boring works you can do. But what happens if you make it into a game? For example, you can compete with yourself how fast you can copy a fixed number of pages — while holding a certain level of quality. Or you can try to match a certain pace, for example, turn the next spread before the light of the xerox scan unit turns itself off. Suddenly a very boring task becomes more interesting. Not really something you would seek out (unlike many games), but at least not as sucky as it would otherwise be.

However, once you leave simple examples, Gamification can become quite difficult. And after doing a seminar on the topic, reading 47 student reports, and thinking about it for a while — I think a good gamified app or system looks like this: 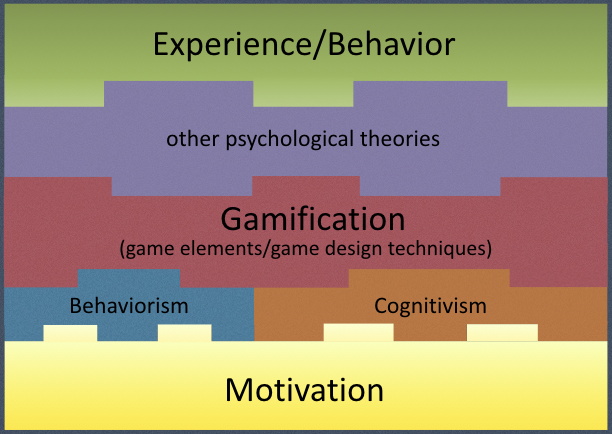 Essentially, with Gamification, you want to connect Motivation to Experience/Behavior. Following Werbach and Hunter (2012), there are two main paradigms you can follow to connect Gamification to Motivation: Behaviorism or Cognitivism. And if you want to influence the experience/behavior of the user, it really pays to include other psychological theories.

Let’s look at these points in detail.

Motivation: Essentially the force that drives you and all other people. Quite literally at times. Even if you are extrinsically motivated (e.g., by pleasure and pain), you are motivated. Only amotivated people don’t move (think severe depression).

Behaviorism: A paradigm focusing on observable learned behavior. With operant conditioning, the focus is specifically on reinforcement and punishment. It is an old and established paradigm that works very well to extrinsically motivate people, but at worst, it turns gamification into (baldy) paid labor or a slot machine.

Cognitivism: Werbach and Hunter (2012) focus on Deci and Ryan’s Self-Determination Theory here. It’s a very useful theory because it points to three basic needs every human being has: autonomy, competence, and relatedness (which includes «meaning»). All three needs are well-fulfilled by games. Autonomy in the form of the virtual world being at the whim (and mercy) of the player — you can do anything. Competence by getting better, having successes — often the game compensates by increasing the difficulty or offering higher difficulty levels. Relatedness not only via parasocial interaction or parasocial relationships (best example I’ve seen so far), but also via meaning. If you accept the narrative, you save the princess or rescue the galaxy.

Experience/Behavior: The target experience/behavior you want to influence. It has to be measurable, which becomes easier and easier with each iteration of digital devices. The logging capacities of these devices are incredible.

But yeah, the complexity makes it interesting. After all, even with games, we see only the successful ones, not the failures. And there are more failures than successes.