“When she wore it at dinner that night, he discovered that the fragrance truly did not differ from that of Jill herself; in some unclear fashion it simply made Jill smell more deliciously like Jill than ever.”
“Stranger in a Strange Land” by Robert A. Heinlein

After 5 years, I finally bought a new MacBook (Pro). My old one lost function after function. It started with WiFi and Bluetooth, then the remote, and culminated with occasional hick-ups that required a restart. Unfortunately, the new MacBooks don’t come with a notebook lock anymore. Well, not natively, manufacturers like MacLocks allow you add a lock. I’m still thinking about it — it seems a bit like the old joke about ‘the lighter the bicycle, the heavier the lock you need”.

Well, to make my notebook at least a bit recognizable, I decided to buy a nice notebook skin. My last MacBook Pro had three stickers on it and I like the idea of personalized belongings. At the very least, you can recognize your property if someone is running away with it. (Now if I only had a remote and could somehow re-task all that electricity in the battery …).

So I thought about suiting skins. Not easy, as it has to be safe for work, must not be trashy, and it has to be me. (Okay, I guess it’s saying something about me that this combination is difficult …).

Anyway, here are the ideas:

The first idea was to celebrate the sense of discovery of the early days of space exploration with a modified version of the Pioneer 10 plaque. Granted, we are still into those early days of space exploration, but the enthusiasm has somehow been lost. And to me, nothing symbolizes the sense of wonder and optimism as sending a plaque to deep space, showing where we come from and how we look like. Seriously stupid, but also deeply human. Then again, we have been sending out radio waves for ages.

So, playing around with the image (“found online”) and a grey background (my MacBook is grey) resulted in this version. 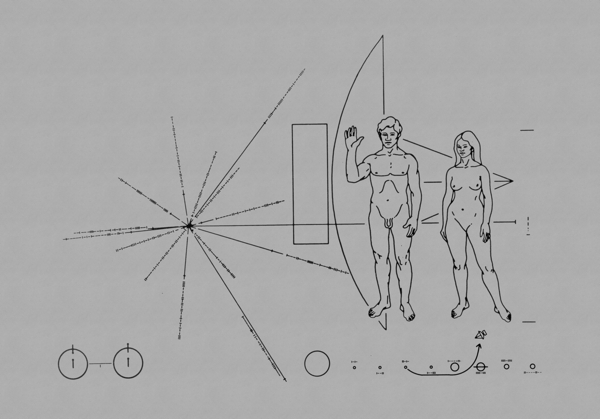 I also changed the position of the objects — looks easier on the eye.

But while this image symbolizes a lot, I guess it also shows a lot (actually, not enough, the woman is not anatomically correct). I thought about adding some fig leaves, but that probably wouldn’t improve the situation. Not that suited to a professional environment.

This motif is also on my favorite T-Shirt, and I would have ordered more if Zazzle hadn’t suddenly rejected the design due to copyright infringement (meh!). But I still love the idea, given Pratchett’s uniquely human view on humanity (including Academia). It also fits part of my Academic ‘career’ (I learned a lot, mostly not deliberately). 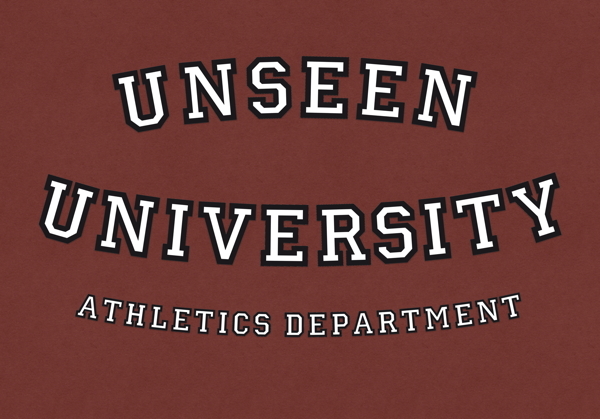 But then again, not very suiting for a professional environment. This is a casual Friday skin, and I don’t have that kind of money (or time, or patience).

Ideas #3 and #4: Drawings and Quotations

Given my love for the drawings of kukuruyo — both of Vivian James and myself — and my love for quotations, a combination seemed suiting. So, combining both led to the following skins: 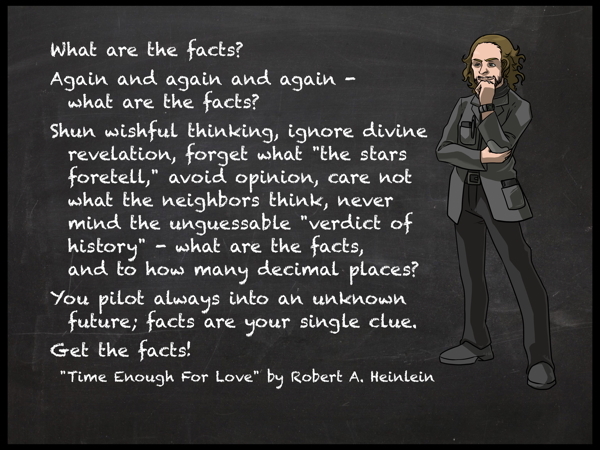 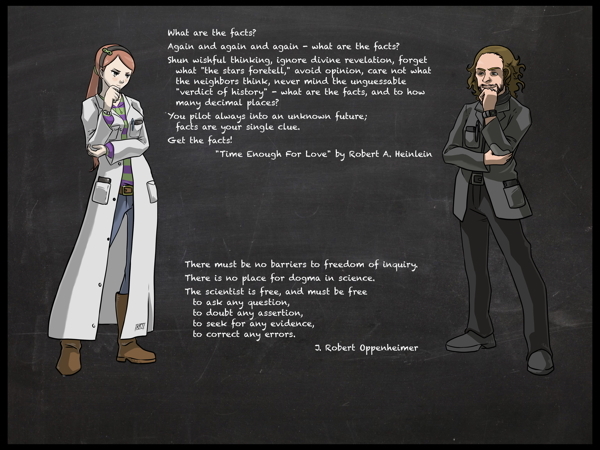 Not bad, but still, not really that suiting. Plus, they are way to detailed, esp. the second one. Too much text. Wouldn’t want people spending their time reading my skin.

So, after a couple of turns and lack of ideas, I went to the cinema and watched “L’Amour de Loin“. For an opera viewed in a cinema it was okay. Best stage design I have ever seen — and yeah, the designer is right, the setting is an actor. Deceptively simple, just strings with lights, but used highly effectively. (The singing was okay to good for the two lovers, but the pilgrim was just really awful.)

Anyway, I did something else and during the performance break I got the idea to just use a book cover. Yeah, it’s not new, it’s a pretty obvious choice, but I had to be amazed by a deceptively simple stage design to notice it. So, back home, I looked through my collection of great book covers and found this one here:

Actually from an online source: http://leonardo.bne.es/index.html And yeah, I liked the Moleskine-like design.

So I used this design pretty much as it is (color scheme) and combined it with a nice texture “found online” (actually a bit too colorful for my taste) — and got to the following design (by coping the one above): 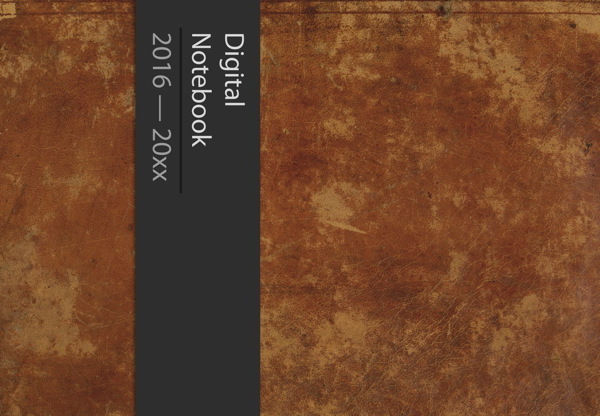 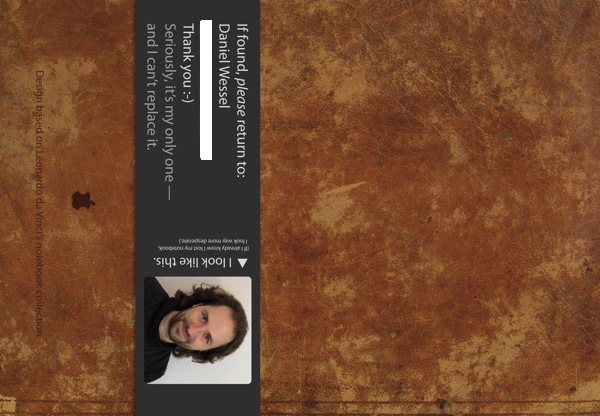 And yeah, a bit too close to an existing work — hard to get any closer. And yeah, the small Mapple Logo is from “The Simpsons”, I couldn’t resist. But I also think the design might be something for my notebook. (If I have oriented the images right, I’ll see that when they arrive.)

And yeah, the second one is for the side underneath the notebook. Not sure whether it works — whether it will conflict with the feet. Heat might also be a problem. Dirt as well as it sits directly on the desk. But it might just work. And it would lead to an hopefully nice overall book look of the whole notebook. That’s the reason why the first image (for the screen side) is oriented this way. Imagine the closed notebook between the two skins and the skins folding down on it, the binding side of the book to the hinge side of the notebook.

Still not very professional looking, but at least something that isn’t unprofessional in the sense that it directs attention to things that should not draw attention. And I like the idea of having contact information on the skin itself (not only when you start the notebook, after all, if automatic login is disabled in “Users & Groups” you can set a Lock Message under the General Tab in “Security & Privacy”) . And yep, I provide only an eMail-address (blotted out in white in the second image) and it can be removed with the skin in 5 seconds without leaving a trace. But I expect that most people who find something are actually quite decent. It’s the ones who steal — even only due to opportunity — who are (by definition) not decent. (An early version read: “If found, please return to: … . If stolen, I will find you, and I will end you.” but I guess that would be a bit too much. This isn’t “Taken“.)

So, now I’m waiting for the delivery. Judging by the last delivery about 3 weeks (got the Pioneer 10 Plague for my older MacBook Pro, I really like the themes of hope and expectation).

It’s not the best skin there is (neither in general nor for me), and probably not the last. And yeah, next opportunity I take some high quality pictures of some good leather and get to work myself.

But yeah, a skin is a nice way to personalize one’s notebook.