I don’t do advertising, but occasionally even a kickstarter backer advertisement eMail contains something interesting. It pointed me to GutenTag, a kickstarter project that offers a simple stamp to help people plan their day.

The idea is to use the stamp to create a clock-face for each day and use it to plan the day.

While I don’t put any stock in assertions like “a proven method for planning a good day” (the creator’s comment that he found a method that worked for him is closer to the truth), the idea is actually quite clever. First, because it uses a different format than the usual linear calendar. That might work for some. Second, because it is a stamp. You can use it with your own notebooks or notepad. And I totally agree here — if you have a notebook you like to work with, you likely don’t want to switch to another brand just to use a specific planning system (no way I’d leave Clairfontaine notepads). There’s also the unequal spacing of the hours — not sure, personally I’d prefer equal spacing. But it does make sense.

Funny thing, I had a similar idea a while back (the clock-face part). One of the calendar ideas I tried out (see Portfolio): 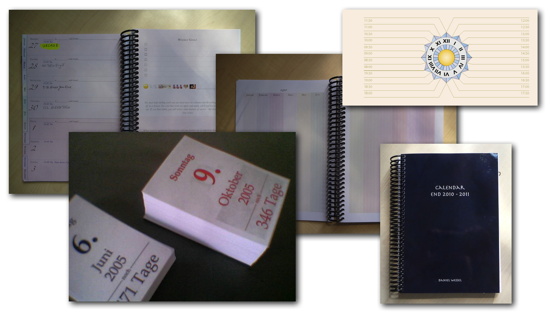 In the top right corner of the image you see something similar. I did not use it because I went digital (if you use Apple’s infrastructure, having calendar entries on iPhone, iPad and MacBook sync is hard to beat). Hmm, and thinking about it, probably only a question of time until someone creates something similar for the Apple Watch. Simply a clock-face with colored sections that represent appointments. A simple tap on such a section and you’d see the appointment itself. That would be quite useful.

Anyway, an interesting project. It’s already backed, but still, I wish him luck. It’s a cool idea and I hope it works for many others who dislike the usual ways of planning a day.