“It’s now very common to hear people say, ‘I’m rather offended by that.’ As if that gives them certain rights. It’s actually nothing more… than a whine. ‘I find that offensive.’ It has no meaning; it has no purpose; it has no reason to be respected as a phrase. ‘I am offended by that.’ Well, so fucking what.”
Stephen Fry

I’ve written a couple of times about social media “activism” or digital pitchforks and so far my outlook has been pretty negative. Way too often companies react in panic when they receive online criticism. Instead of discarding even thousands of tweets as not important and simply sitting it out, they often react with knee-jerk reactions to appease people who often aren’t even their customers.

So I’m actually a bit in awe of the reaction Protein World gave to critics of their ad campaign. When their ads got defaced (apparently often only with Photoshop) and they got critical tweets, their reply was … different: 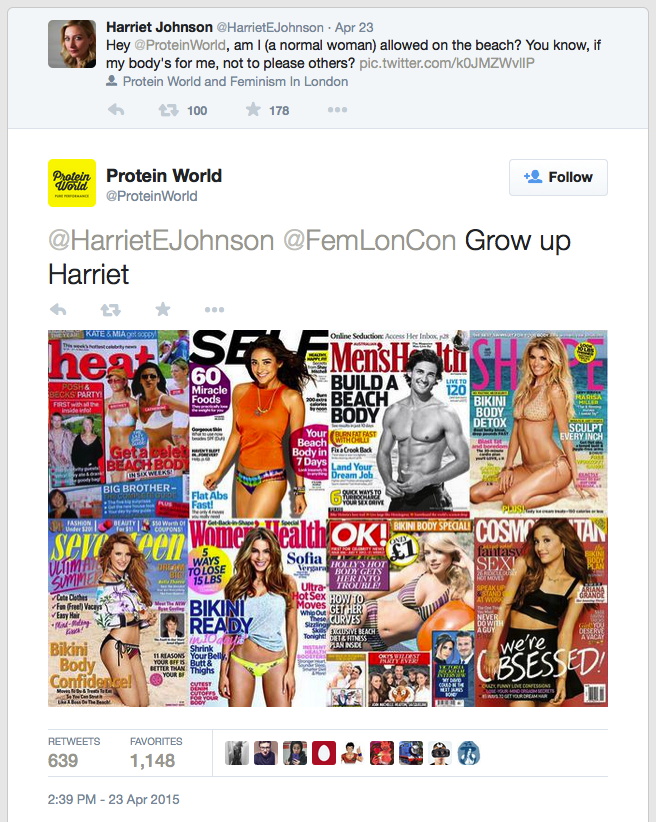 And they continued this way:

And apparently it wasn’t an intern who went rogue, but something sanctioned by the CEO:

And in a comment that will surely pour vinegar into the protester’s wounds, Staveley claims the protest has actually helped his company’s brand profile and increased sales.
“I couldn’t have dreamt or hoped of having our advert reproduced more times across the news networks and social media as it has been done,” says Richard. “This protest has been absolutely phenomenal for us and entirely counter-productive for them.
“At the height of the protest, myself and the CEO took over the Twitter feed from our usual girl, and it was hilarious. They were saying, “ooh, somebody’s getting fired tomorrow” – but it was us: the CEO and head of marketing. We had a good chuckle at that.
Breitbart.com: Protein World: The ‘Body Shaming’ Protest that Turned Decidedly Ugly

And I think Breitbart’s question whether online protests and a petition are today’s marketing tools is a good one:

And in the final, delicious slapdown for today’s trigger-happy SJWs: Is an online protest and a Change.org to ban a product actually becoming the essential modern marketing tool? And are the SJWs simply part of the marketing machine for the products they so vociferously loathe?
Breitbart.com: Protein World: The ‘Body Shaming’ Protest that Turned Decidedly Ugly

You can’t please everyone, all of the time, and now there’s a strategy in not even trying. Ride that outrage-wave to free media mention fame, brands. It’s a bit like playing with fire, and obviously will not suit all brands but in the case of a workout supplement, it’s probably a perfect tone-of-voice for its intended target. Renee looks fit, not emaciated, like she combined her supplements and balanced diet with exercise. The ad idea “Are you beach body ready” next to a pretty woman isn’t a new one, we’ve seen this for products like Slim Fast and DynaTrim in the 70s already – it’s the use of social media as a catapult to earned media that is.
Adland.tv: If “grow up Harriet” becomes a meme, blame Protein World

And yup, Protein World could not have hoped for better marketing. And in any case, it’s better than the knee-jerk apology to the chronologically offended and professional umbrage-takers.

Update: Protein World’s actions continues to lead to interesting analyses and comment, including by marketingmagazine.co.uk praising its integrity. Yep, integrity:

‘Integrity’ is, of course, a word that’s casually associated with ‘being good’, but in fact integrity only ever really has substance if it concerns a view that is dangerous to hold.
http://www.marketingmagazine.co.uk/article/1344885/why-protein-world-reaping-rewards-its-genuine-integrity

Protein World has paid a price, of course – it is now also hated, a claim that few brands can make nor would want to.
It is, however, a calculated hatred, as those people out there who disapprove of Protein World’s brand of vanity-oriented self improvement are pretty unlikely to be purchasing its products anyway.
http://www.marketingmagazine.co.uk/article/1344885/why-protein-world-reaping-rewards-its-genuine-integrity

If you sit at the pole of a vaguely polarising issue, identify your ‘anti-market’ and attack it.
If possible, harness the trend of ‘cyber shaming’ and use it to your advantage. This approach will work particularly well for brands whose position hovers around the libertarian/conservative side of politics, as their ‘anti-markets’ are much better mobilised socially and capable of feeding those precious flames of scandal.
You’ll lose no customers and become a champion for those who share your side of the issue.
These are the polarising brands – strong stomachs, the capacity to be hated, and a pretty robust set of community managers. Expect to see more of them.
http://www.marketingmagazine.co.uk/article/1344885/why-protein-world-reaping-rewards-its-genuine-integrity

Well worth a read. The whole thing reminds be a bit of Harry Potter:

“You know, Minister, I disagree with Dumbledore on many counts … but you cannot deny he’s got style …”
Phineas Nigellus in “Harry Potter and the Order of the Phoenix”