“Buffy, look at me. You are not in an institution. You have never been in an institution.”
“Yes, I have.”
“What?”
“Back when I saw my first vampires … I got so scared. I told my parents and they completely freaked out. They thought there was something seriously wrong with me. So they sent me to a clinic.”
“You never said anything.”
“I was only there a couple weeks. I stopped talking about it and they let me go. Eventually, my parents just forgot.”
“God … that’s horrible.”
“What if I’m still there? What if I never left that clinic?”
Willow and Buffy, about Buffy’s doubts whether the world of vampires is real or the world where she is insane in an asylum, in Buffy the Vampire Slayer: “Normal Again”

There are a few very well constructed series. “Breaking Bad” for example. Or “Star Trek DS9”. Or, “Buffy — The Vampire Slayer”.

“Buffy” is a bit like Star Trek (TNG/DS9), in the sense that Star Trek is not about aliens or even space exploration, but simply uses aliens to illustrate human issues. They provide a nice contrast and can exemplify human concepts or issues. In Buffy, the aliens are monsters, but the same concept applies: Tell fantastic stories, while examine deeply human everyday issues.

And the things you can address when it’s ostensibly about monsters? Waow.

And the design of the full series pack? I recently got series 1 to 7 (all that were filmed) and … woaw. Beautifully done. I mean look at the DVD covers: 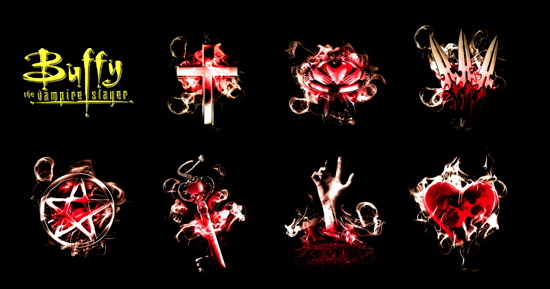 If you know the series, each DVD cover shows one image that pretty much sums up each individual season. Yeah, even season 4 where I was stumped by the pentagram for a moment. But yeah, makes sense. Just golden.

Watch the series with an open mind and a young heart.

Chances are, it will blow yours’.