There’s something to be said for simplicity. For an environment that lets you focus on the things that are important, instead of burdening you with chores that distract you from the important things. One concept that beautifully expresses this idea when it comes to the way we live is Sarah Susanka’s “Not So Big House.”

A Not So Big House dispenses with the rooms that are rarely used, so there’s money available for the qualities that make a house a home. This is the art of the Not So Big House: to take out square footage that’s seldom used, so that you can put the money saved into the detail, craft, and character that will make it eminently comfortable and uniquely yours. In short, it favors quality over quantity.
Susanka, 2011

Key design concepts of her “Not So Big House” idea include: “Shelter around Activity”, “Doing Double Duty”, “Variety of Ceiling Heights”, “Interior Views”, “Diagonal Views”, and “A Place of One’s Own.” (Susanka, 2011).

She gives a lot of examples in her books and tips on creating the “Not So Big House”. I especially like the idea of “Making Wish Lists and Reality Lists” (Susanka, 2001). 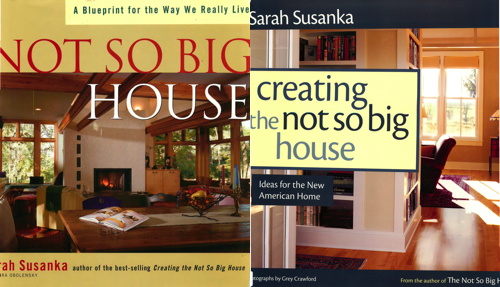 If you are interested in ways of living that use the space smartly, instead of having a lot of space to care for, I can highly recommend both of these books.