A column about errors will contain errors.
Bill Gold

When we talk about misconduct in science, there usually are three deathtraps that can (should) kill a career: 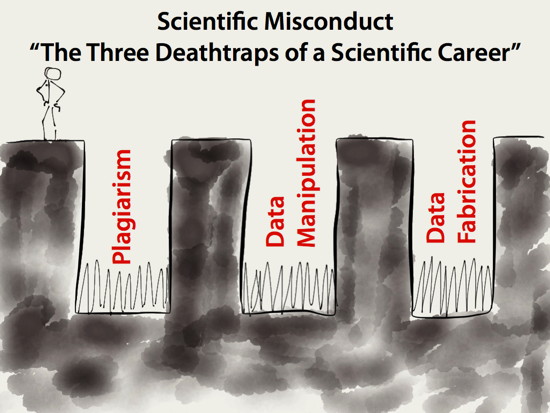 Given that the scientific method(s) are usually the best ways to deal with societies problems, we cannot afford scientific misconduct, not for ourselves and certainly not for society.

The focus of these postings is on plagiarism. I’m going through a few things I have read recently and try to highlight a few interesting issues.

There are many definitions of plagiarism, but the core aspect is the lack of attribution (Luke & Kearins, 2012), nicely put by this quotation:

“Plagiarism is the appropriation of another person’s ideas, processes, results or words without giving appropriate credit.”
United States Commission on Research Integrity, 1995

In contrast to everyday thievery, plagiarism steals what is most important in science: the recognition of the work (e.g., Bartlett & Smallwood, 2004). It’s with papers and publications — and the ideas and work behind them — that people (should) advance in science. Stealing someone else’s work, claiming to have come up with an idea, an argument structure, data, etc. oneself while in fact having it copied from an unattributed source is unethical and damaging. It’s not a victimless crime (see consequences of misconduct above).

No wonder plagiarism is usually (at least formally) frowned upon and forbidden. In my discipline (psychology) we have the Publication Manual of the American Psychological Association (2009), which states:

1.10 Plagiarism and Self-Plagiarism
Plagiarism. Researchers do not claim the words and ideas of another as their own; they give credit where credit is due (APA Ethics Code Standard 8.11, Plagiarism). Quotation marks should be used to indicate the exact words of another. Each time you paraphrase another author (i.e., summarize a Passage or rearrange the order of a sentence and change some of the words), you need to credit the source in the text. (p. 15)

The key element of this principle is that authors do not present the work of another as if it were their own work. This can extend to ideas as well as written words. If authors model a study after one done by someone else, the originating author should be given credit. If the rationale for a study was suggested in the Discussion section of someone else’s article, that Person should be given credit. Given the free exchange of ideas, which is very important to the health of intellectual discourse, authors may not know where an idea for a study originated. If authors do know, however, they should acknowledge the source; this includes personal communications. (p. 16)

However, plagiarism is not clear cut — it’s not solely black or white (but those definitely exist, well at least the black), there are also shades of grey.

Wager (2011) distinguishes between the following features of plagiarism:

She also refers to author seniority (e.g., young researcher unsure of the rules) and language (e.g., English as second language).

Personally, I think the supervisor is responsible when a PhD student conducts plagiarism due to not knowing the rules, and regarding language — let’s just say, that’s what proofreaders are there for. If you cannot write well enough in the language of science for a proof reader to work with, how can you read it and develop it further?

Given the prevalence of plagiarism in the political landscape of Germany (that’s where the “Big Fat Kill”‘s are), a German online magazine has provided a list of different kinds of plagiarism. Roughly translated(*) they (Spiegel.de) refer to:

In this context I would also mention scientific misconduct when it comes to authorship. The only difference here is that in these cases people usually know each other better than in the other kinds of plagiarism. The two frequent issues in authorship are Ghost-Authorships and Gift-Authorships (e.g., see Albert & Wager, 2003):

While a supervisor who, well, supervises a PhD student should be co-author if this supervisor actually supervises the PhD student and has contributed to the paper, being a department head alone is not sufficient for co-authorship or for sole authorship. For example, the International Committee of Medical Journal Editors (ICMJE) stated in the Vancouver Protocol:

“Authorship credit should be based only on:
(1) substantial contributions to conception and design, or acquisition of data, or analysis and interpretation of data;
(2) drafting the article or revising it critically for important intellectual content; and
(3) final approval of the version to be published.
Conditions (1), (2), and (3) must all be met.
Acquisition of funding, the collection of data, or general supervision of the research group, by themselves, do not justify authorship.”

Many journals follow these guidelines and there are institutes who plagiarize these rules in their scientific best practice guidelines (and as usual with plagiarism, when those institutes make changes, they usually make them worse).

So, this was a short overview of what plagiarism is — I would have included some examples but the ones I have encountered I cannot put online. However, there is a … an interesting article by Kock (see source below) that states an ugly case of plagiarism.

I think in some aspects plagiarism is a very difficult topic, mostly due to two issues:

More in one of the next postings …

(*) There are better translations but I’m doing this on the fly after more than 9 hours of work. But hey, I squashed an ugly bug at work today, I feel great. 🙂