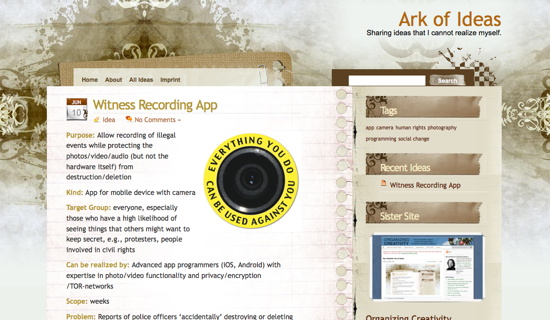 “Let’s put it on the Internet!”
“No, we have to reach people whose opinions actually matter.”
Unknown

I have just created a new website called “Ark1 of Ideas” (http://www.arkofideas.org). Given that I have way too many ideas than I could realize, I have decided to make those ideas public that I cannot/will not realize myself. They are released under Creative Commons License (Attribution) — legal code here, so feel free to use them.

I doubt that many ideas will be useful for others, which is a realistic and not a depressive estimation, given that ideas are easy, but the realization is hard. Furthermore, people usually want to claim ownership of the idea itself, not the ‘mere’ (but usually more difficult) realization.

Nevertheless it is better to make ideas available than letting them degrade in my wiki. As written, I will release ideas that cannot/will not realize myself, so these will be ideas in any areas except writing, photography and some programming ideas. Currently I’m aiming at one released idea per day.

So, I you want to have a look, here’s the link to the Ark of Ideas website.

1 Ark in the double meaning of the figurative “vessel or sanctuary that serves as protection against extinction” and in the archaic use of “a chest or box” (Apple Dictionary).