They must often change,
who would be constant in happiness or wisdom.
Confucius

I have made a major change in the way I deal with my (now > 9000) ideas. I have switched from a DokuWiki to DEVONthink. Unless something unacceptable happens (e.g., losing data), I will continue using it. I have already invested time, effort and money in it and transferred part of my Wiki into it.

On first glance, it looks like the Finder of Mac OS X. But looks are deceiving. Sure, you can import your files into it and it will display them like a directory, but in truth DEVONthink is a powerful database that helps you to deal with huge amounts of information, with text files, documents, images, anything. 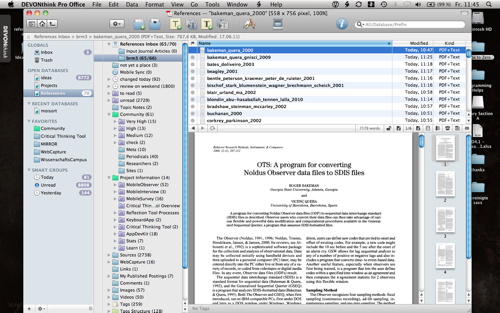 Once you have imported files into DEVONthink you can work with them, and you can do a lot:

There are a lot of other things DEVONthink can do, including scanning and much, much more.

There are also two things that are quite helpful — the sorter and the dashboard widget.

Things that are not so good

Of course, not everything is perfect. The main issues I have with DEVONthink are:

However, the greatest problem is that it is not that user friendly. I think they say in their product video that it might appear confusing at times (uh-oh!), and if you do not grasp the concept and have a clear idea how you want to use it, it might overwhelm you. It is very powerful but you need to have a structure in mind how to sort your information, how to deal with them.

And DEVONthink doesn’t make it easy for you, for example, their handbook starts with release notes that aren’t of interest. I got the impression that they are hiding their light under a bushel or do not know how to convey in simple terms what DEVONthink can do for the user, how it should be wielded.

The software allows you to deal with an insane amount of information but like the problem they have created their product for, they fail to convey the big picture. It loses itself in the details. And while DEVONthink can be used for almost any purpose, a simple test database would have been nice just to see how one can work with it.

Two things are missing which would make DEVONthink more useful for me. It’s not implemented but I think that it would be a very nice and useful addition to DEVONthink:

Mobile Version: “DEVONthink to go” (or rather: no go)

DEVONthink also offers a mobile version for iOS (“DEVONthink to go”). I tried out the iPhone version (which is rather expensive) and was disappointed. You need to be in the same network as your Mac to sync information and you have to move the files you want to sync into a special folder of the database (or create a duplicate or replicant in it). Very, very inconvenient and absolutely of no use for me (it also takes you 3 clicks to sync, interrupted by a slow flip view animation).

I’d expected being able to tag files that should be synced but not luck. Perhaps with iCloud some improvements will come. Until then it’s “DEVONthink no go” for me. A shame because it has a huge potential.

Despite these drawbacks and missing aspects DEVONthink is an incredible piece of software. In the next posting I’ll go into more depth why I did change from a DokuWiki to DEVONthink, followed by a posting about doing literature research and reading with DEVONthink.