“An error doesn’t become a mistake until you refuse to correct it.”
Orlando A. Battista

I have written a few articles that were proof read by professional proofreaders (no, these blog entries are not proof read ;-)). None of the feedback was bad, but realizing that receiving proof reading is similar to computer supported communication with all “deficits” or “challenges”, I think some things can be improved.

Below are some suggestions for good proofreading and — the other side — for dealing with receiving the proof reading.

While your job is to find the flaws, let the author know when he or she did something good, too. The best proof reading I ever received began with a remark regarding my dedication: 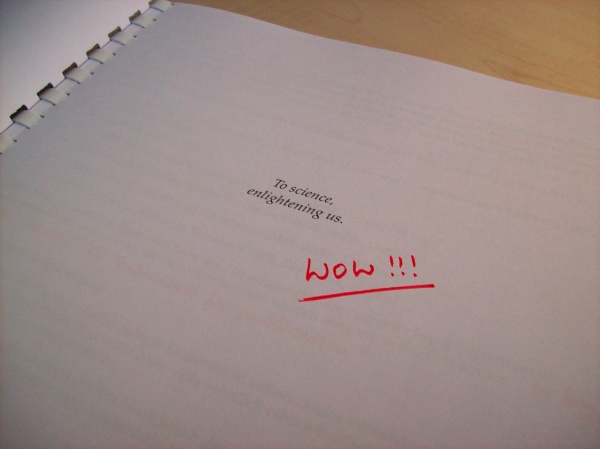 I mean, after reading this encouraging and very nice remark, I was ready to face the sea of blood on the next pages that my sentences had caused to be shed. Some encouragements later on (only if there is reason to do so and something is really good — never be condescending) help as well. 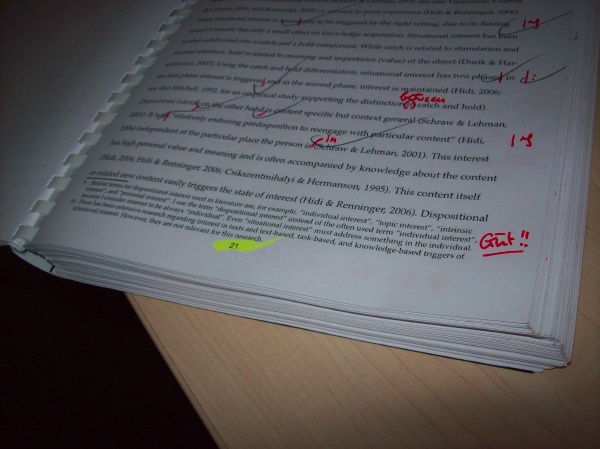 Mark the same Mistake Each and Every Time

Yep. Some mistakes are not slips of the pen but real mistakes. If a person does not know that a specific word should be replaced by another that makes more sense in this context (e.g., due to connotations that the author did not know about) and that word is very important in the article, this means that you can mark the same word dozens of times. In my dissertation I copy-pasted a citation and — unfortunately — there was a spelling error in it. My proofreader marked it each and every time. I guess if I show her the citation now she will probably jerk or vomit, but marking it each and every time was actually the right thing to do. Telling an author to find(!) and correct the mistake from now on him- or herself is a sign of laziness by the proofreader and re-delegates the work, something that should never-ever be done. After all, an author will focus on the marked words and sentences and ignore the other text, so he or she will likely not find the other cases where the mistake occurs.

Give Feedback that You Understood the Writing

Texts are sometimes hard to understand. If you do not understand what a sentence means, you should mark it. Even if you do not know how to rewrite it to make it clearer (if you did, the sentence would not be “not understandable”) the author can probably deal with it and rewrite the sentence. This also refers to sentences you understand that play with words or are deliberate attempts at humor. A “LOL” or a “:-)” shows the author that he has made himself understood here — and humor in scientific texts is always hard to achieve. 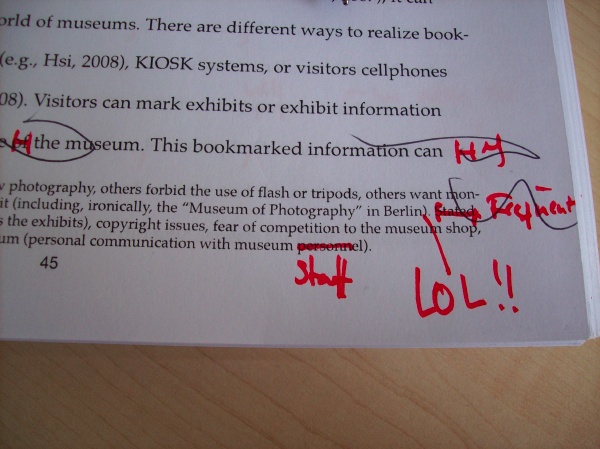 Give an Explanation When Something runs Counter to General Rules

If you correct something that is wrong but is normally done this way (e.g., the heuristic that “an” instead of “a” before a word that starts with a vocal), then give a short explanation. Even if it was just a slip of the pen your author learns somethings this way. After all, you do not want to correct the same mistakes over and over again (referring to different articles, always correct all occurrences of a mistake in one article, see above). BTW, have no fear that you might loose your customers — most will cherish it. And even if you do, there is the next generation of scientists with broken English just graduating … 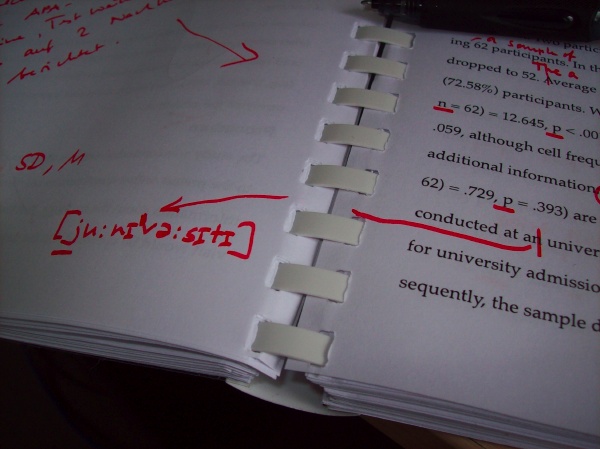 Be Bold in Editing (thanks, Wikipedia, for that :-))

Nobody likes to have his or her mistakes pointed out, but many people like letting their mistakes stand uncorrected even less. And many people want to learn to write better, to write better English. However, they cannot improve if you do not point out the mistakes clearly. Often, proof readers are timid in their corrections. Don’t be. Ask in advance whether the goal is a correction of the spelling and grammar or whether you may also improve the style. If the later should be included, then do so. I write like a German writing English (well, I am German) and my style is not native English writing. The way I construct my sentences is different — and in most cases worse. If you do not point that out, I cannot improve my style — and I want to improve it. So do many other scientists.

The best proof reading I ever received included things that made me smile. Okay, this person is my best friend and we understand each other, so it was possible for her. And many people will not appreciate it. But for me, small remarks like the one below made my day. 🙂 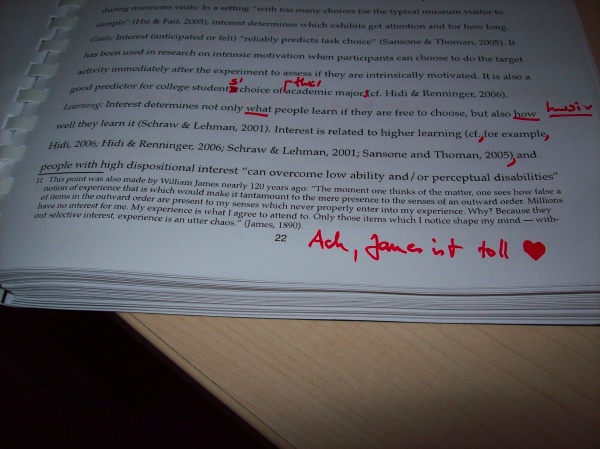 Tell me How You Work Best

Proofreading can be quickly done by receiving the text as Word document and sending back an edited document using the Track Changes and Comment Features of Word. Some proofreaders like to work this way. A friend of mine doesn’t. She prefers to work with a pen on paper and — given the feedback I received — it works perfectly for her. Word Edits and Comments might be quicker to integrate (especially if you simply accept all changes) but I think you learn less from it as an author. Given that many authors want to improve their work, ask them how they want to get their proofreading back.

It’s the Work that Bleeds, Not Your Body or Your Soul

Yep, someone has just slit open your sentences and let them bleed freely over the white pages … receiving a black-on-white text covered in red remarks can be hard to swallow. However, the proofreader criticized the work, not you as a person. And any work can be criticized. You might want to protect “your baby”, but to give it a fighting chance against external reviewers and critics, it needs all the blood-letting and restructuring it can get before the actual fight starts. I found it helpful to keep that in mind.

Strike through any correction you have dealt with. This will allow you to quickly continue your work, you see how much you have already included in the text, and I find it very soothing. It was a flaw of the paper, now it’s gone. Now the work is just a little bit better than before. 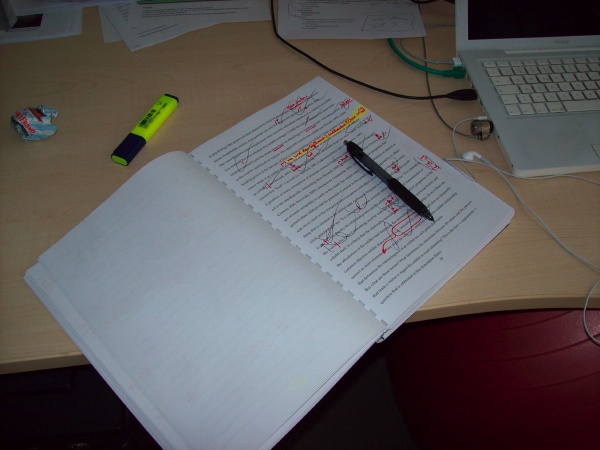 (Note: This works best if you receive the corrections on paper. With a Word document, think of removing the blemishes. BTW, some proof readers like to work with real paper and I think it leads to better corrections than the comment and track changes mode of Word or Pages. The proofreader can go wild on the pages and edit more quickly. Sure, Word annotations are quicker for the author to integrate, but I think you get less valuable feedback this way.)

(Note 2: I use a highlighter to mark the places where I still have to correct something — e.g., I need to dig into the literature for that. I highlight the place itself and the page number — works like a charm.)

Working without external feedback never works well over longer time frames. I think many proofreaders work in a setting where they could similarly put their corrections in the trash bin regarding the feedback they get. Without feedback, how can any proofreader improve his or her work? We had some proofreaders in the past who turned in corrections that resulted in comments by editors to “get a proofreader first”. I don’t think they were bad, I think they went bad. So give feedback whether the work was good or not, and whether you think that the corrections were good or not. Nobody likes to work in a vacuum.

Do you have other tips for proofreaders and authors — write me a comment. 🙂