A guy wearing white gloves is examining the remnant of the scroll in Lilah’s office.
Man: “Nyazian. Exquisite! I recognize the Ga-shundi cross-text. Quite a find! Have you any idea what this is worth?”
Lilah: “Hopefully enough to cover my ass. […] Now, I’ve highlighted the sections they seemed to be concentrating on.”
Man: “You highlighted an ancient Nyazian Scroll?”
Lilah: “In yellow.”
Angel episode #53 “Lullaby”

My first iPhone programming project was a behavior observation tool for the iPhone/iPod touch. It is easy to use and one can record behavior quickly by simply pressing a button that records the behavior together with date, time, participant number, and setting.

I planned to use it in a study in a museum, but since the originally planned study has a delay, I modified the program and gave the tool to a colleague to use in her study. She tried it out and reported that she liked the high speed with which it was possible to record behavior and that the data could be transferred easy to a PC for further analysis.

However, she had serious problems recording qualitative data, i.e., making notes with pen and paper. I did not integrate text fields in the tool because I think that mobile devices are not good for text entry (even the large iPad comes with an external keyboard-dock). The idea for recording text information was to press a button that gives a consecutive note number, write down the number on a sheet of paper and then the manual note. I think this is the easiest and quickest way to make annotations and it did prove to be viable (for me) in one of my private projects. However, it did not work for her, she said it was to hard to handle both the iPod and the sheets of paper.

After some discussion I found out that she was still using her three pages of paper per participant she had originally created for the observation (without the tool) — but now in addition to the tool on the iPod touch. These pages consisted of a large table with visitor actions on the left and a large cell for notes on the right. She originally intended to use three pages per participant. This concept of making notes was completely different to the way the tool works and very hard to integrate with it. But instead of creating a new paper template that uses the advantages of the tool (i.e., the note number that can be used to link manual notes to that entry) she tried to do both kinds of behavior recording at the same time. No wonder it didn’t work.

So, while the tool itself was good (in my opinion) the practical application was suboptimal. Instead of adapting prior work and synthesize it with the tool, the prior work was preserved as it was — and that lead to a huge metal and manual overload.

After detecting that confusion I proposed the following “enhanced tool” to deal with the problem: 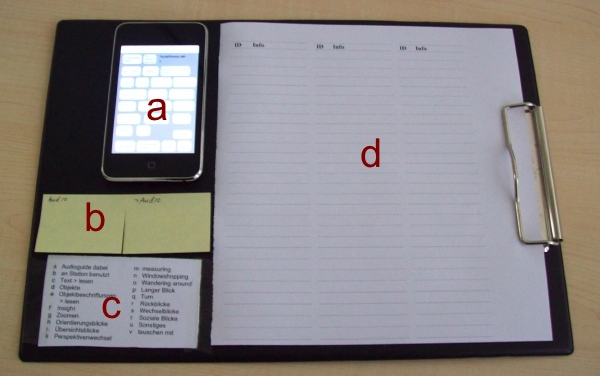 Instead of using the tool and three pages per participant all that is needed is integrated onto one clipboard.

A few possible further enhancements would be:

One advantage is that the whole configuration can easily be changed. Double-face adhesive tape, normal adhesive tape, the pages in the clipboard holder themselves — they can all be moved around. One must be very comfortable with the configuration and this is a personal issue, so change is possible.

In theory it should work better in that setting — in practice it depends on what the person is doing with it.

And I think that is the general conclusion that I took out of this experience. It didn’t occur to me beforehand that a person would not do this automatically. If a new tool is introduced I automatically adapt the infrastructure. Any technical change causes ripples through it. Sometimes I have to modify the infrastructure, sometimes I have to adapt the tool, sometimes I have to do both — it’s rare that I do none. It is natural to me, but some people try to preserve what they have, are unwilling or unable to change their infrastructure or simply do not see that they can do it. In these cases it is important not only to provide the tool but explicit information how to integrate it into the work process. One has to look very carefully not only whether it is used but how, and where possible misconceptions are that prevent the use of an otherwise very useful tool.

Update: And sometimes the tool is not used at all. Just got feedback, she will continue to use paper. Sad, but that’s life — and an interesting experience in developing an observation tool for informal settings. At least some Ethnologists either need a different tool or a different self-concept. 😉