When a place gets crowded enough to require ID’s, social collapse is not far away. It is time to go elsewhere. The best thing about space travel is that it made it possible to go elsewhere.
Excerpt from the Notebooks of Lazarus Long in «Time Enough For Love» by Robert A. Heinlein

Funny day. First I can only buy one bottle of olive oil, then each can of Red Bull is marked with an RFID tag.

And yeah, I think I nailed it when I said that «hmmm, we had Pestilence with Covid, now War in Ukraine (at the moment, will spread), I guess next up are Famine and Death», because, apparently, in a Western industrialized nation we now have a so-called «oil shortage». Not crude oil, but olive oil. Apparently. Because I could not buy two bottles of native olive oil. Well, unless I enter the store again, when a different person sits at the cashier. Or just enter a different supermarket. (Which I might have done.)

(And as an addendum – the most sickening part — it wasn’t just the cashier who told me I could not buy two bottles (where are we, the German Democratic Republic?!?!), it was an older woman in the queue behind me emphatically adding to the cashier’s «You only allowed to buy one bottle.» with a, well, «heartfelt» expression of «One bottle!». Guess we’re really in the German Democratic Republic.)

But yeah, get used to famine. Get used to a country no longer protecting those who actually contribute to its flourishing. With a political caste more interested in appearing good, than doing good.

I mean, I just bought a four-pack of Red Bull and each can was tagged individually with an RFID chip to indicate (not so sure about the preventing) stealing. 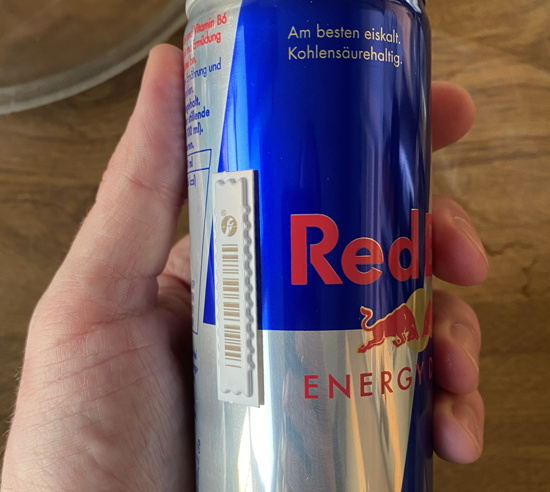 Bad times. Time for a … creative plan B.