«Enough about sex positions. Has anyone discovered a reading position which doesn’t get uncomfortable after 5 minutes?»
Unknown

I’m still looking for good reading positions. Although I am pretty convinced that there is no good long term reading position. There are only those good for a few minutes (depending on the book, anything between 5 and 500 minutes, and yeah, the upper bound is somewhere around 8 hours). But one position which has fascinated me for a long time was a reading … lectern? Not sure what the term is. But it’s something like in these images:

So I started sketching … 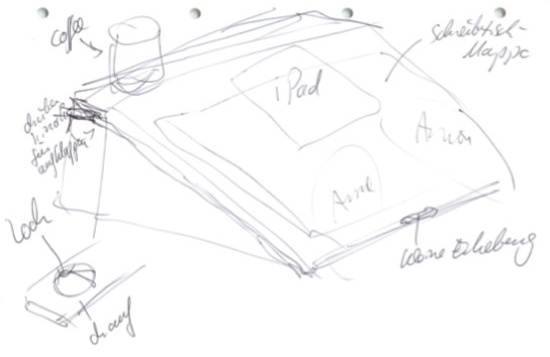 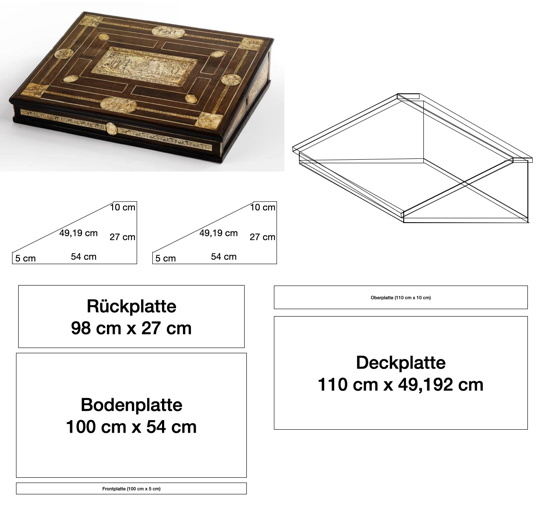 But I also wanted a dedicated place for reading. And something sturdy beneath it. So I looked into a shelf-lectern combination and started sketching: 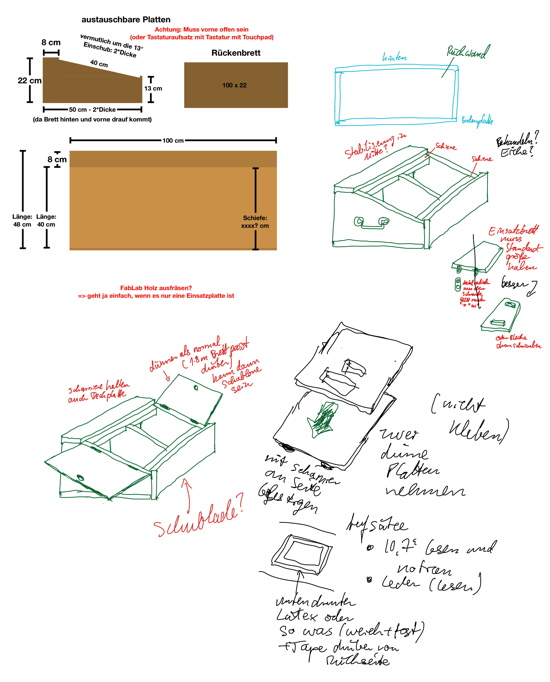 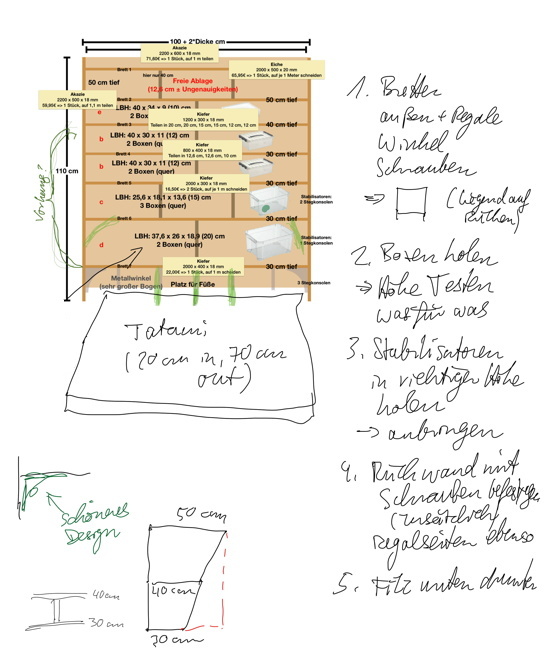 The sketches varied between rather complicated and simple. With lots of small iterations (e.g. putting the boards in the back of the shelf in a horizontal orientation instead of vertical). 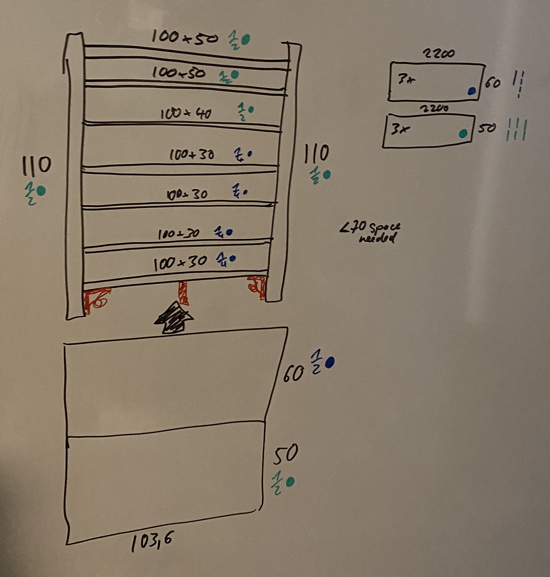 Fortunately(?), after a while, the sketches started to stabilize: 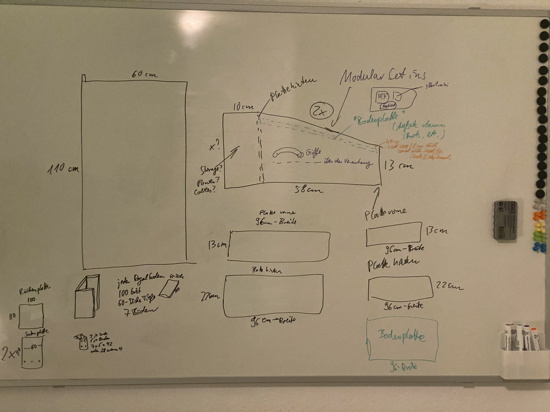 As for the lectern itself, I went for a «simple» solution. Well, simple for an expert, as someone who doesn’t know the first thing about carpentry … still challenging: 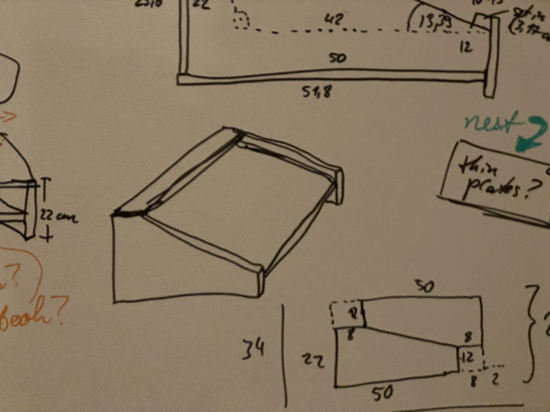 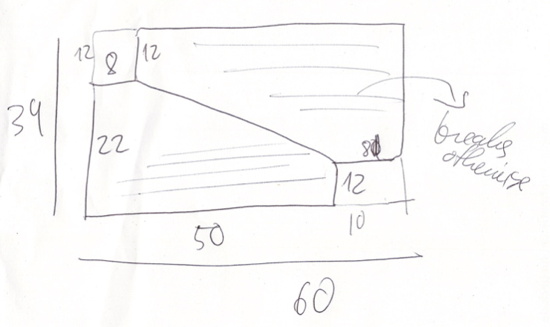 One thing I wanted to do in any case with the lectern is have cut-outs for my iPad 10.5 inch and iPad mini. The later is in a rather think «rugged» case.

The first idea was a fixed hole for the iPad 10.5 inch: 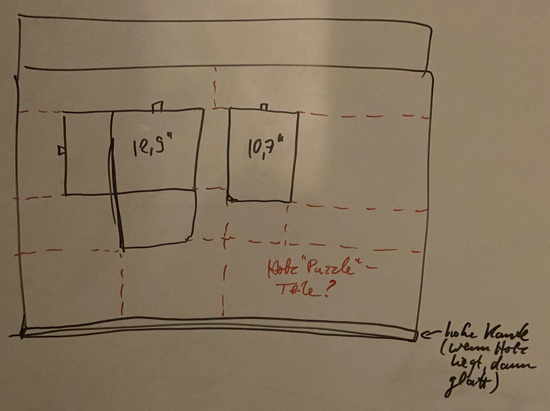 Followed by cut-outs for horizontal and vertical orientation: 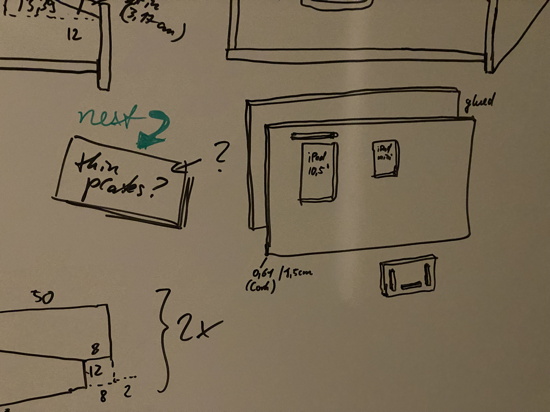 Until it hit me when I was looking for thin boards in the hardware store. I couldn’t find them in the size 80 x 40 cm. So I thought I’d combine smaller ones. But given that I could also go for squares … why not use two square boards — then cut out what you need for the iPads, and given that you can rotate the boards by 90° or 180°, and even turn them around, you can cover lots of positions for the iPad. Well, if you don’t put it in the exact center. But otherwise, yeah, lots of variations. 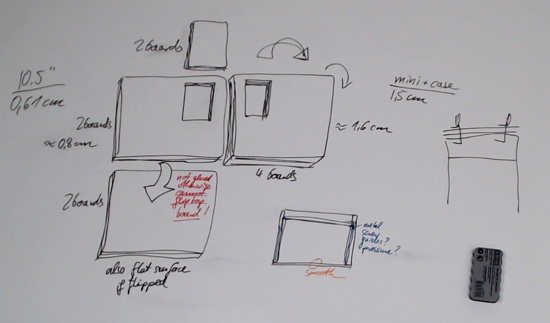 And with the last(?) ideas falling into place, I started cutting. First constructing the base: 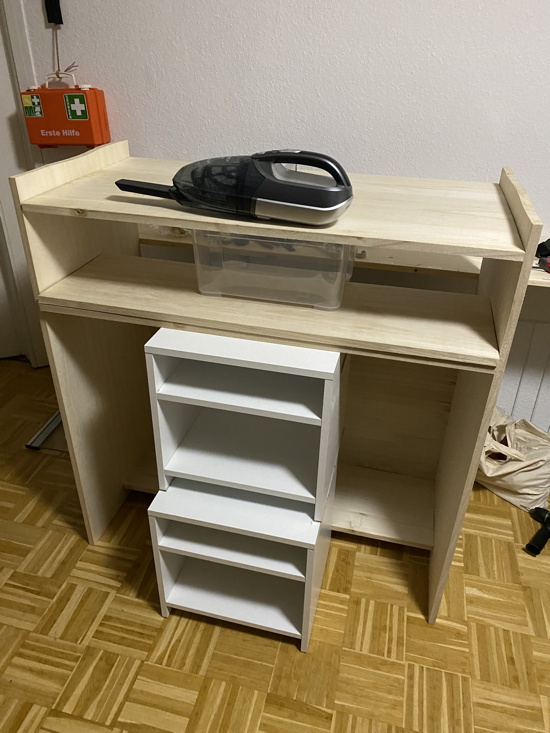 Yeah, I used anything that was the right height and had 90° angles. Worked out surprisingly well. I did cut the wood myself (if not very straight). The hardware store told me to wait a moment before taking my order, and when that «moment» crossed the five minutes line, I left, ordered the wood online and cut it myself. 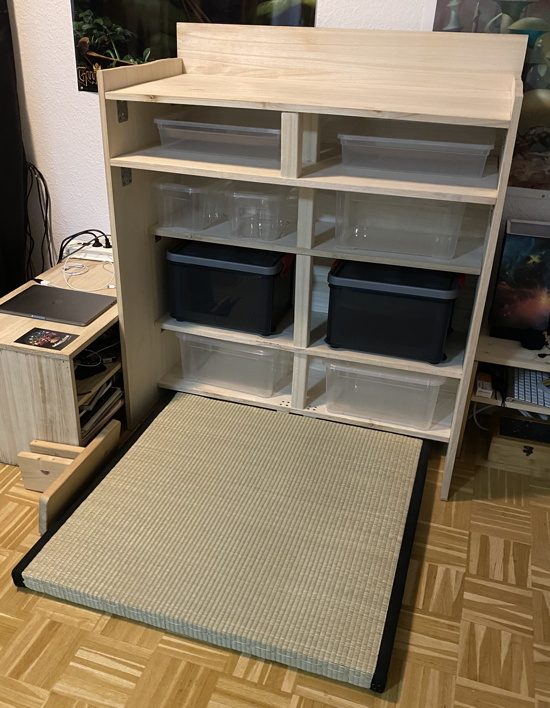 Note that the top two boards are 50 cm — as are the side boards of the shelf — while the other boards are only 30 cm. When you stand at the lectern, you need space for your feet, legs and — most importantly — knees.

Next up was the reading lectern.

The first attempt to glue two 4 mm boards together was a failure as the result was pretty warped. But when I used a board and a flat surface the result was fairly even: 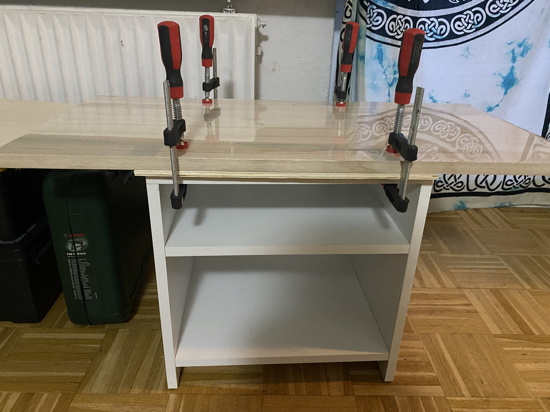 Once the boards were done, I worked on the reading lectern itself: 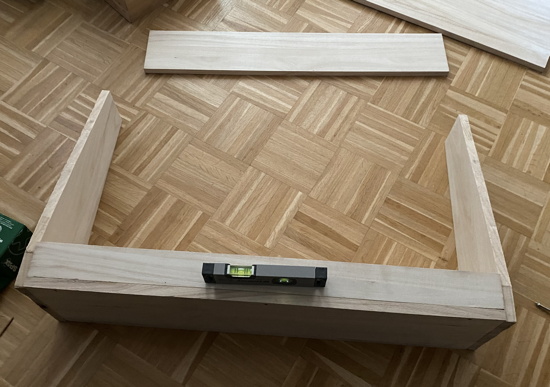 Again I used anything that was even and had 90° angles to screw the parts together.

As usual, the underbelly is quite atrocious: 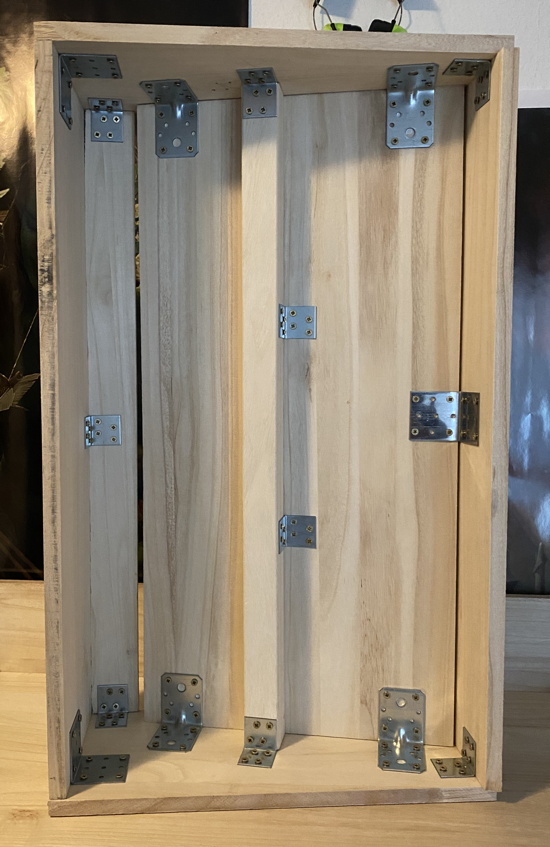 But it should be (also) quite sturdy.

Overall, it turned out pretty well: 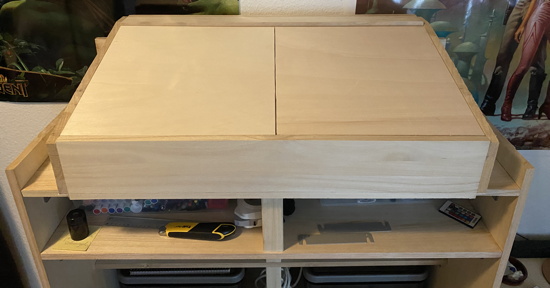 And yup, it is deliberately a bit smaller than the shelf — but still pretty wide. Never understood those tiny (just a bit larger than an open book) lecterns. I need some place to rest my arms, esp. the elbows. So the lectern is 83.6 cm wide and 50 cm deep (with the reading/writing surface being 80 x 40 cm, which fits the two 40×40 cm thin boards).

Last part was cutting the holes for the iPads: 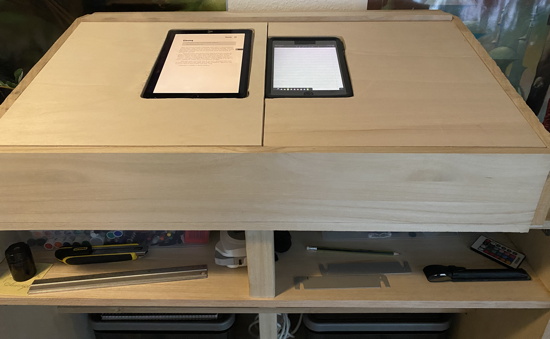 Not that accurate, but good enough. Satisficing. And yeah, the wood did splinter on the left side. Something to deal with later. Perhaps I use glue, or something else.

At least, the devices are flat: 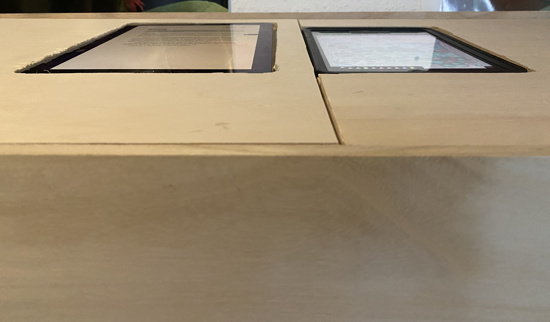 And yeah, I kept the cut-outs — so I can create a (mostly) flat surface again. 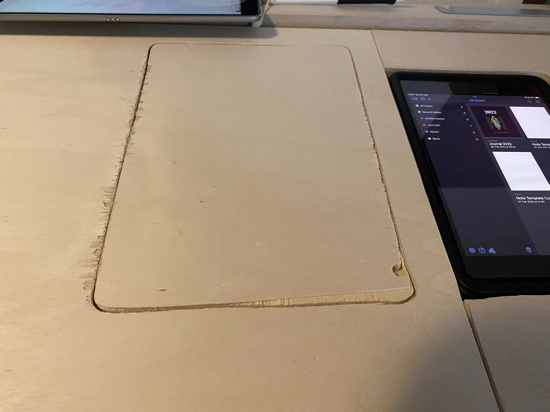 Even easier on the left side, as there are two 4 mm boards. Not only can I imply flip the board with the iPad 11.5 inch hole to create a landscape orientation: 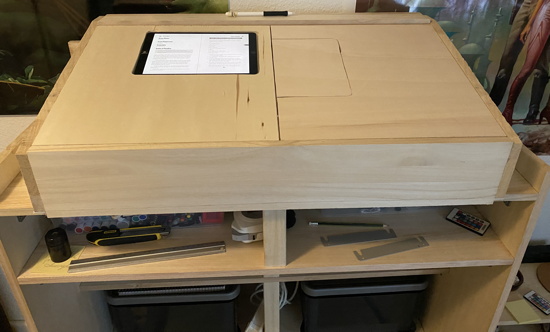 I can also put the uncut 4 mm board on top. But even the right side can be made (mostly) even. The idea with using two thin 40×40 boards was … great. Lots of options to place the iPads. 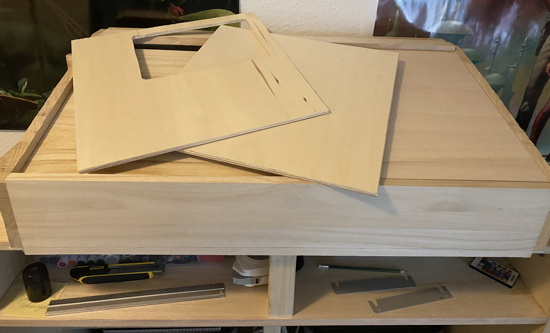 And when the holes are covered, I can simple put a leather mat on top for a really smooth surface: 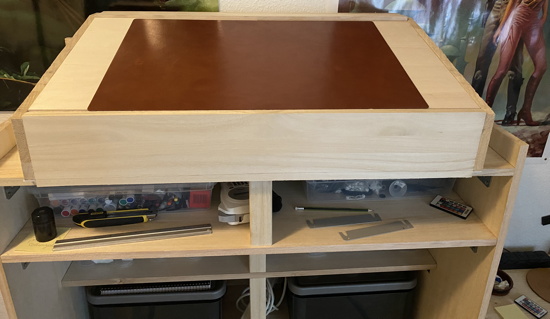 So yeah, I still have to test the «Reading Shelf Lectern Combination» in prolonged use, but so far — it’s what I had imagined, and more. As usual, the iterations — and giving yourself time for ideas before actually building it — were really useful.

Of course, it’s a badly constructed prototype. Just imagine how it would look in oak. And the 40×40 cm inlays made from oak as well, and with much better cuts that I could ever do it.

Next option will probably have a lectern with a front opening — could work, but needs a different construction and stronger wood. Something like this: