Many things went on at Unseen University and, regrettably, teaching had to be one of them. The faculty had long ago confronted this fact and had perfected various devices for avoiding it. But this was perfectly all right because, to be fair, so had the students.
«Interesting Times» by Terry Pratchett

Looking at student’s test data and their score in the final exam, yeah, the assertion in the title holds true.

And yeah, one thing I would really like to have is a good Learning Analytics system. Heck, any learning analytics system. Something that provides me with information about my students, which need more help, which exceed expectations and which fall behind, and why. It would be a great starting point for a “Dutch Uncle“, or just for any lecturer who gives less shit about “publish or perish” and more about an university lecturer’s integrity to teach well.

I mean, looking at the data that I have available from the test and exam scores alone is eye opening. Just look at the scatterplot of the average score in the three tests (of a statistics course for media informatics students) and the score in the final exam. 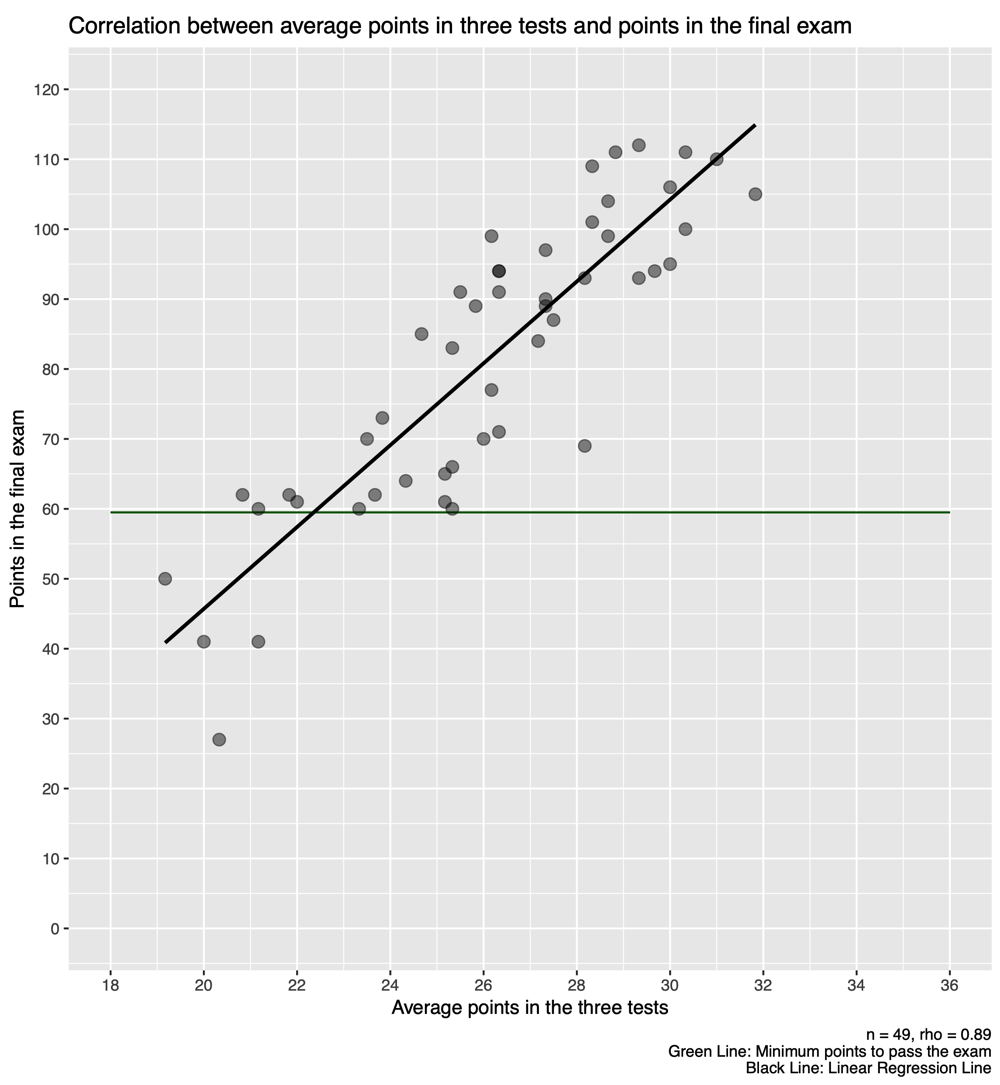 And yup, the tests were done on paper, during the course, under conditions similar to the exam. That likely did a lot. Just compare the scatterplot (SS 2019) to the one from the year before (2018), when I did weekly online tests (they had a week to do them): 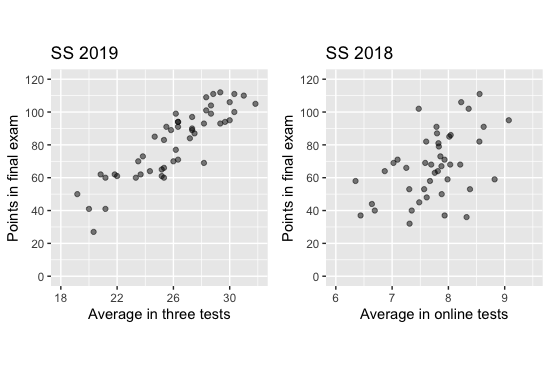 You can really work with the tests data. Hell, you can predict their scores very well. (Why do the tests at all? Well, because they likely correspondingly learned for the final exam, without it, they wouldn’t have solidified their knowledge. I hope.)

And now imagine what would be possible if you had data from, I don’t know, personality questionnaires, school GPAs, the like. And if you’d detect some interesting correlations between these data and the exam scores. You could try to intervene … point out possible problems, perhaps suggest taking only half of the courses if these students have deficits in multiple areas. And yeah, that sucks if you only get financial support as a student for six semesters. But what’s worse, having to find a job (as a computer science student?!?! Just don’t leave university for the money they throw at you!) or ending up without a degree but with student loans (not so sexy to get employed then)?

So … yeah, at the moment, there are some things people can do who do care about student’s success. But … dang, there’s just so much potential here.

(And yup, there are also ethical issues and issues of paternalism, but I think these can be managed. But you can’t work with people who waste away without your knowledge or quit outright.)