«The attempt to ‹noplatform› a speaker is, to my mind, the equivalent of book burning. Preventing someone from delivering a talk is like pulling a book out of my hand.»
Lyell Asher

I never thought I’d see the day when I link to Buzzfeed News, but their article: “An Inside Look At The Accounts Twitter Has Censored In Countries Around The World” is well-worth reading. Buzzfeed did a pretty good job of identifying Twitter accounts that cannot be accessed from certain countries (they even provide the code). If you try to access these accounts from one of these countries, you’ll see a message that the account has been withheld in your country. 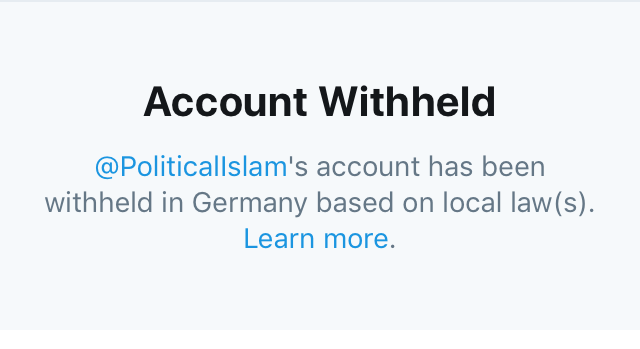 Now, the Internet wouldn’t (still) be the Internet, if there wasn’t a way around it. Simply install the Tor Browser, and unless you’re unlucky and come out in a withheld country, you should be able to access these accounts. If not, just restart the Tor Browser and try again. I guess it’s (still) true what John Perry Barlow said: «The Internet treats censorship as a malfunction and routes around it.»

Oh, and BTW, Buzzfeed News also has a spreadsheet with the account names and countries in which they are withheld. Almost as good as those lists of books you may not read. 😉

Frankly, I think one of the worst things you can do in a democracy is go for censorship. Yes, there is content that should lead to criminal prosecution — defamation and libel, direct calls for violence, things like sexual abuse of children, and the like. But those things need to be investigated and dealt with by the court of law, not by a private company withholding user accounts. Plus looking at some of the accounts — I highly doubt you could make a criminal case against all of them. In at least some of these cases, it’s censorship by commercial proxy. The state may not censor (we actually have that passage in our constitution), but like the church burning people instead of spilling their blood, there are ways around it. The state still does not censor, it just makes it very, very expensive if social media platforms do not remove vaguely defined content in a very short time period. Suddenly, local banning makes sense for commercial enterprises.

And that’s a very short-sighted way of dealing with unpleasant opinions. Democracy needs informed citizen and censorship just means those in power do not trust that those who (ostensibly) give them power will make good decisions. That the voters think, make up their own mind, and come to their own conclusions. A certain correlation between censorship and elections also seems very suspicious here. But yeah, the last thing we need is politicians who think democracy is fine if it weren’t for the voters.

And considering who is heavily involved in censorship and their political leanings — it seems to me like a lot of the state informers of the former German Democratic Republic have found a new calling there. Their attitude is suspiciously similar. If you find something that’s against the political leanings of the state parties, inform them. Yikes.

Here’s hoping our democracies can withstand that infection.