It’s impressive what you can do with Apple Script. I really have to look more closely into it. But until I have that time, here are two examples from other people:

In my posting on OmniOutliner (as alternative to Circus Ponies Notebook), Bruno left a comment with an Apple Script for changing the content of an outliner column. It works great when you use a single OmniOutliner file for notes of articles or books, have it named correctly (e.g., authorname_authorname_…year.oo3) and want to have the source information in that column. It simply put the file name in the second column (well, third, if you count the notes field).

— set text of cell 3 of row i to docName
— cell 3 is the source column, seems like the notes column isn’t visible yet counted as well 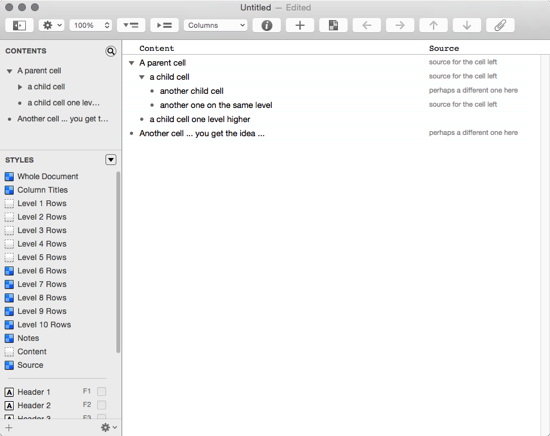 you can quickly add the source information (filename + extension) to the Source column (would overwrite the values in it — in the image above). (You get an .oo3 behind the name, but if the .oo3 bugs you, just search and replace it.)

I recently had a problem with the presenter notes in Keynote. The text was too long to be fully shown on the exported slides (PDF with notes). But it’s possible to quickly export the presenter notes with an Apple Script. You find scripts for that purpose on this website.

And hey, lots and lots of potential. 🙂