Last night was weird. I knew logically that nothing bad would happen in just one night, but it was a little unnerving to know I had no life support other than heaters. My life depended on some math I’d done earlier. If I dropped a sign or added two numbers wrong, I might never wake up.
The Martian” by Andy Weir 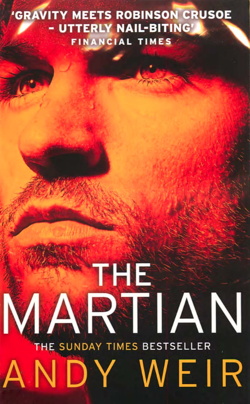 This morning I finished reading “The Martian” by Andy Weir (yup, read through the night). It’s been a while since I had that much fun reading a fiction book. And considering it started as self-published book, the writing is (mostly) really well done.

Without giving away too much of the story, it’s about an astronaut who gets left behind on Mars when the team had to abandon the habitat and return to Earth due to a dust storm. During the evacuation, he gets hit by debris, which destroys the bio-monitor in his suit (think “Aliens”), and separates him from the group. The others can’t find him in the storm and the bio-signals indicate he’s dead. Given they have only minutes before their escape vehicle (MAV) tips over, they leave without him.

The novel switches between a first-person narrative (log files of the left-behind astronaut) and third person narrative (mostly events at NASA). It plays more or less in today’s time. I’m not well-versed in astronomy or technology, but I found the book believable. The way he solves the problems he faces and comes up with new ideas was a joy to read. And it’s not only him, it’s also the people at NASA once they find out he’s still alive. The things that work well (e.g., standardized valves), and the fuck-ups you only notice in an emergency:

“Okay,” Venkat said. “Explain to me how a single windstorm removed our ability to talk to Ares 3.”
“Failure of imagination,” Chuck said.
“Totally didn’t see it coming,” Morris agreed.
“How many backup communications systems does an Ares mission have?” Venkat asked.
“Four,” Chuck said.
“Three,” Morris said.
“No, it’s four,” Chuck corrected.
“He said backup systems,” Morris insisted. “That means not including the primary system.”
“Oh right. Three.”
“So four systems total, then,” Venkat said. “Explain how we lost all four.”
“Well,” Chuck said, “The primary ran through the big satellite dish. It blew away in the storm. The rest of the backups were in the MAV [Mars Ascent Vehicle, what the crew uses to leave Mars].”
“Yup,” Morris agreed. “The MAV is, like, a communicating machine. It can talk to Earth, Hermes, even satellites around Mars if it has to. And it has three independent systems to make sure nothing short of a meteor strike can stop communication.”
“Problem is,” Chuck said, “Commander Lewis and the rest of them took the MAV when they left.”
“So four [sic!] independent communications systems became one. And that one broke,” Morris finished.
Venkat pinched the bridge of his nose. “How could we overlook this?”
Chuck shrugged. “Never occurred to us. We never thought someone would be on Mars without an MAV.”
“The Martian” by Andy Weir

But the stuff NASA comes up under pressure — and the lengths they are willing to go. Loved it. Makes me wonder about the differences of the fictional story and the real-life problem solving NASA did in actual emergencies. And about their organizational culture.

For example, during the book, at least two relatively low ranking employees walk into the office of the person in charge of the rescue mission and suggest brilliant ideas. If that actually works in an organization like NASA … hmmm, it would be great if the administrative branch worked this way. Considering how difficult organizational creativity is and how hard it is to make sense out of information in large organizations, this kind of open door policy would be a plus.

Anyway, it’s a great book. One of the few where I did not know until the last pages whether the protagonist would survive. Or those involved in the rescue mission.

And … why aren’t we doing manned Mars missions? Nothing against probes, but I miss mankind’s spirit in action. The one that got us in space and to the moon in the first place. Okay, perhaps that was due to the intense rivalry between the USA and the USSR, but hey, it would be a shame if that’s needed for mankind to make great steps.