The most valuable of all talents is that of never using two words when one will do.
Thomas Jefferson

I stumbled upon the following tweet by Steven R. Shaw on word fluff: 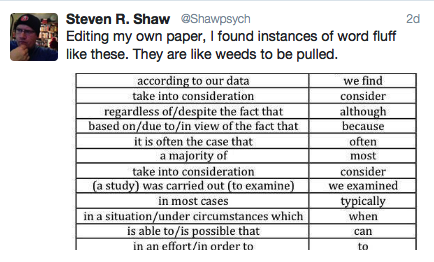 It reminded me about a feature I really want for writing software (e.g., Scrivener). An option that highlights the complicated phrases and suggests better ones.

It can’t be that hard. Just look at the options at Hemmingway App: 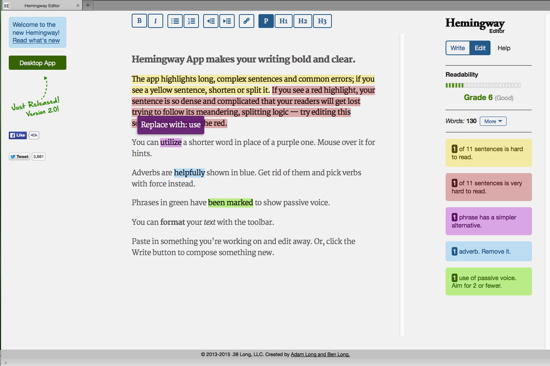 It suggests easier words and offers a lot of other interesting features. But it’s one of the few apps that do this. Which is strange, given that you can easily find lists of words and phrases to replace. For example, from Alley (1996, p. 120-122):

redundant words — the word in () adds nothing and should be deleted

fat phrases that should be reduced to the simplest form

writing zeros that usually can (should) be deleted

In general, I can highly recommend Alley’s book (Alley, M. (1996). The Craft of Scientific Writing (3rd ed.). New York: Springer.). Great tips on technical and scientific writing. And hey, Hemmingway seems to have grown up. They now even have a Desktop app (haven’t tried it yet).

Of course, no software can replace the human mind. And there are some instances when you should break rules and recommendations in writing. But you should know when you break them unintentionally.