Under normal conditions the research scientist is not an innovator but a solver of puzzles, and the puzzles upon which he concentrates are just those which he believes can be both stated and solved within the existing scientific tradition.
Thomas Kuhn

As written in “Commissioning Artworks“, I can’t draw, but I can commission an artwork from someone who can. For example, an image of Vivian James (mascot of #gamergate) as an adult scientist. I totally love that artwork and used it on a couple of T-Shirts and buttons.

Given that I am doing a presentation on “Organizing Creativity” at two … well, conferences outside of Academia, I wanted to use the image of Vivian James on the slides. But something was missing. An image of a scientist who doesn’t work in a lab coat. And yup, while I wouldn’t call all academic disciplines “sciences”, a lot of them do not require lab coats.

So, I asked the artist who drew Vivian James to do a picture of myself. I provided a few images of myself and this was the result: 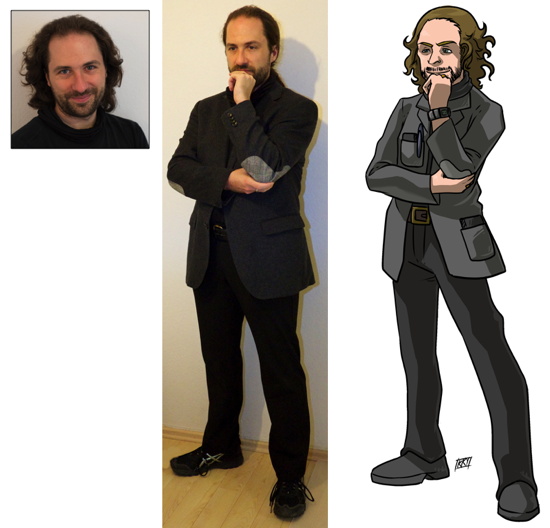 (I used a self-portrait of myself in the clothes I wanted to use, but given that I desperately need to get my hair cut, I provided an older photo of the hairstyle I wanted to have.)

Personally, I love it. I did make a few adjustments of my own (mostly, changing the belt buckle and the rings from gold to silver), but overall, I’m satisfied. Not 100% sure regarding the eyes, but then again, who knows himself?

So, the last slide of my presentation is now balanced — by a scientist in a lab coat, and one without: 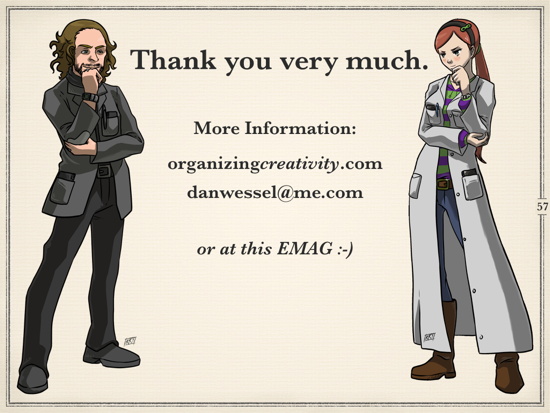 And yup, I did mirror the image of me … and there was a reason for this pose … it’s one I show frequently.

And don’t you just love the 21st century? Even if you can’t draw, you can commission artworks to convey your vision. Sure, in total, that slide is worth $60, but given how I will use the images, and already have used one of them … totally worth it. (And yup, the artist did put the image online on the deviantART page and on the personal homepage).

As bad as the world otherwise can be, this is something to celebrate.