Recently the power/synchronization cable of my iPhone broke. Look at that poor bastard: 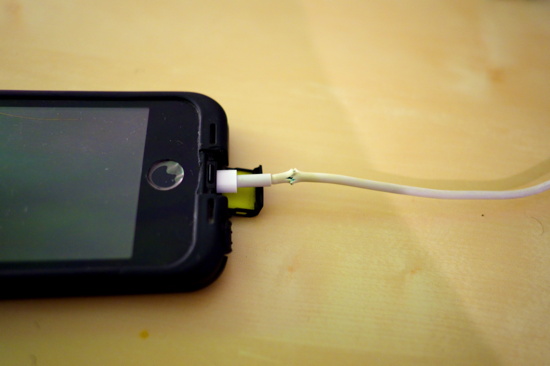 Well, it still works, but given that the isolation is shot it’s only a matter of time until it fails. The original replacement costs more than the Amazon Basics “certificated by Apple” ones. Well, if they are certificated by Apple they should be compatible, shouldn’t they? And why order another cable that has the same fundamental design weakness. Where the cable breaks close the USB part. I mean, it’s not the first one to break: 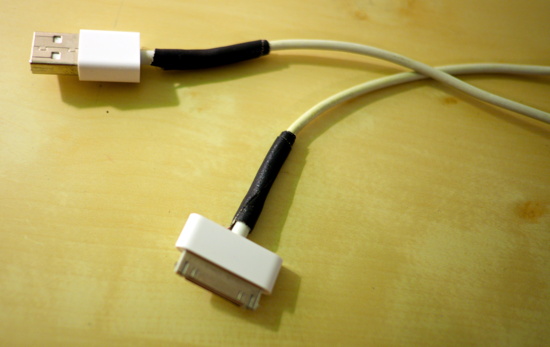 The cable for my iPad broke as well. And it’s a well known issue … with an easy fix, if Apple wanted to implement it. But they seem to be happy to make money of people replacing their cables this way. Otherwise I don’t understand why they go with an inferior design.

But hey, Apple wants money, and they get it. Even more, considering that the AmazonBasics cable did not fit into my LifeProof case. So much for certificated by Apple. It’s just too broad. And seriously, how can you not have a case that’s waterproof and shock resistant. The ability to read and tweet in the bathtub alone is priceless.

So, I was thinking about ditching the cables (that did not fit), but a few days after receiving them I suddenly had this flash in my mind of the VGA adapter I ordered a year ago (unfortunately while falling asleep). That thing fits into my iPhone. And it should probably fit the broader AmazonBasics cable. 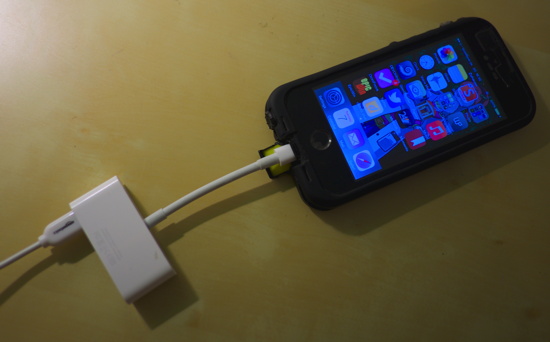 And yup, I got up, got the adapter, and tried it out. There was an attempt by the iPhone to detect the external monitor, but otherwise, yeah, it gets charged. (Update: But apparently, it does not work for data transfer, e.g., if you use your iPhone to go online with your MacBook.)

So, if you got an adapter that does not fit, think outside the box. While a VGA adapter is usually used for a projector, it might just be the piece to use on an otherwise incompatible piece of equipment.

Isn’t it great when things just … work (whether the company wants it or not). 🙂