“When you first entered the restaurant, I thought you were handsome … and then, of course, you spoke.”
Carol Connelly in “As Good as It Gets” (1997)

I spend some time on Twitter — it’s a nice way to occupy me during walks (8 km on a work day, 4 to and 4 from the office). Just the right bite-sizes for walking and reading/writing (until I get hit by a truck). 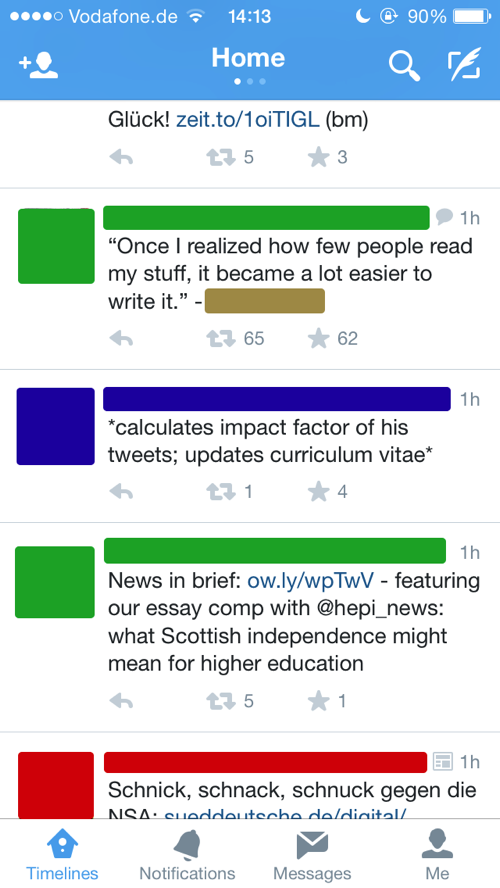 But looking at the sometimes nice, sometime … unfortunate names and avatar images, I wonder: What would happen if Twitter were completely pseudo-anonymous?

If you would replace all avatar images with solid colors denoting whether this person is a follower, you follow is this person, relationship is bidirectional, or follows someone you follow, etc. And if instead of the names you had simple numbers — the same number for the same person, different numbers for different persons.

What would happen if you did know much less about the person who said something, and looked only at the words. And what if you remove all of the information, make it really anonymous, just leave black or white blanks where the picture and name would be, or remove these fields entirely?

It would be interesting to try out such a Twitter client, and if the Twitter API still allows for private Twitter Apps, it would be possible to build it. But what would it become?

“a nation where they will not be judged by the color of their skin, but by the content of their character”

to quote Martin Luther King, Jr.? And at what price? You would not be able to build relationships with people — even “superficial online relationships” — as you would not have any indicator of repeated contact. After all, you would not know what else the speaker of that 140 character tweet has said before.

Would it work? Or would we quickly become very good in differentiating between the people we follow (and whom they follow)? And how would the demographic of those we follow look like after a year?