“What about his friend?”
“Long-term relationship, compulsive cheat.”
“Seriously?”
“Waterproof cover on his smartphone. Yet his complexion doesn’t indicate outdoor work. Suggests he’s in the habit of taking his phone into the shower with him, which means he often receives texts and emails he’d rather went unseen.”
Janine and Sherlock in “Sherlock”, Season 3, Episode 2: The Sign of Three via http://arianedevere.livejournal.com/65379.html

There is a beautiful scene in Sherlock, in which Sherlock makes an observation about the waterproof cover on a smartphone (see above). While I love the series, esp. the first episode of each season so far, I often think that the conclusions are a bit … Sheerluck (to quote a movie whose name I have currently forgotten). For example, I highly recommend putting a waterproof cover on a smartphone. A smartphone is just such a highly useful device — it makes sense to be able to use it in the rain, the bathtub, or anywhere you might hesitate to pull out a device that costs half a grand.

Personally, I have a Lifeproof(R) cover on my old iPhone 4 and today the Lifeproof(R) fre Cover for my iPhone 5s arrived: 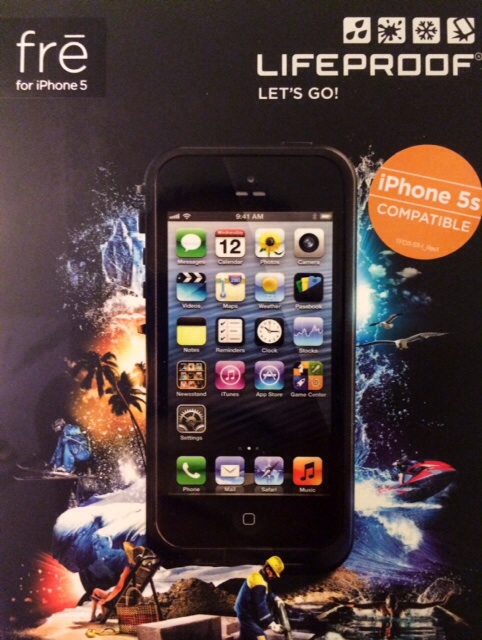 Not only does the phone handle better (I have large hands), it’s now also (more or less) waterproof and overall more resistant to the elements. The cost of the cover was pretty high, but on the other hand — so was the price for the phone itself. And I’d rather invest in a cover — which has other advantages as well — than having to buy a new phone. As usual without warranty that the cover actually protects your phone — I go from personal experience here. The box I bought was “updated” by slapping on a sticker that it is “compatible” with the 5s. Apparently there’s also a cover specifically developed for the 5s, but I was tired of waiting — esp. as some products take ages to become available in Europe. So far, the cover I have seems to work well.

BTW, I think the back of the phone itself (not the cover) is a nice place for an address sticker — in case the device gets lost. I also highly recommend using a lock-screen background that does more than entertain, but can actually help getting your phone back. This means it shows your eMail-address and a phone number of another phone you have access too (work, parents). After all, most people are basically honest — if you don’t make it too hard for them.